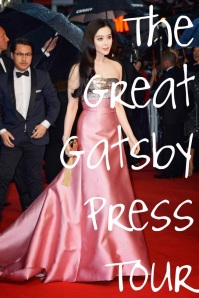 Put on your favorite flapper dress and throw some money in the air, ’cause it’s time to go Gatsby.

FAN BINGBING at the Cannes premiere
gown and purse by Louis Vuitton, jewelry by Chopard

Fan Bingbing stole the show at the Gatsby premiere/Cannes opening ceremony in her stunning, custom-made, dusty mauve gown with that perfectly embellished bodice. It’s no secret that I am fully obsessed with the beautiful Chinese superstar and her phenomenal wardrobe, but to out-dress all the stars of the movie by a mile is quite an achievement. And just you wait until I get to the Cannes posts – Fan is everywhere and looking more and more fabulous every second.

This was my Spring 2013 couture red carpet prediction for Elle Fanning, but I’m thrilled to say it looks fabulous on Nicole, who’s three times Elle’s age. Since she’s a Cannes judge, you’ll see a lot more from Ms. Kidman in the coming days, but her Gatsby premiere look is my favorite so far. I think the embroidery over the floral is just so beautiful and interesting to look at. The length is adorable, and the shoes are just so much fun (and let’s be honest, we don’t exactly equate Nicole Kidman with “fun” so much as “ice queen”).

CARA DELEVIGNE at the Cannes premiere
gown by Burberry, jewelry by Chopard

Let’s ignore the terrible hair and focus on this damn sexy dress and Cara’s absolutely stunning jewelry. The earrings and necklace are divine on their own and together, they absolutely make the outfit. I love the old Hollywood makeup, with the nails matching her red lips perfectly.

Carey, darling, I love your tuxedo jacket more than words. But would a little bit of eyeliner kill you? This is your press tour, darling, and you only get to be Daisy Buchanan once. (Unless the terrible tradition of movie sequels continues and we are subjected to The Great Gatsby 2: Electric Boogaloo.)

Sleek and chic, though not particularly memorable. But it’s only a photo call, so that’s forgivable.

Silly Carey somehow managed to save her worst look for the Cannes premiere, allowing herself to be upstaged by starlets who weren’t even in the damn movie. The lipstick is great, but the rest of the styling is so nonexistent that it doesn’t look like it belongs here. And I just don’t think that dress is remotely interesting. I think the color is all wrong for her, and the skirt just sort of hangs there like it’s still on a roll of fabric. For the love of God, Carey, when Baz Luhrmann is out-dressing you, you need to rethink your choices.

I love this. Is that weird? Is this actually hideous and ridiculous and somehow grandmotherly? I feel like it is, and I still love it. The crop top is just perfect,  and the skirt is just beautiful to look at, though I’m not sure it’s the right length. I thought I hated the shoes at first, but it’s sort of awesome the way the lace-looking print in the shoes echoes the print in the bottom of the skirt, but in a neutral tone so it’s not too distracting. The purse and earrings are obviously adorable, and I think the wreath of flowers in her hair is kind of charming! But feel free to tell me I’ve lost my mind in the comments.

FREIDA PINTO at the Cannes premiere
gown by Gucci, jewelry by Chopard

That color looks like it was invented just for Freida – that’s how magnificent she looks in it. The gown is beautiful, but I feel like she’s worn just a few too many things like this before.

Who says gingers can’t wear red? It’s not the most original or unique gown on the planet, but she looks awesome in it, and the styling really makes it look glamorous and fun. That necklace in particular is just phenomenal.

Hollywood: no more little white dresses with black peep-toe pumps. There’s nothing innately wrong with either of those things, but I’m just so bored of this look on the red carpet, I can’t stand it.

She’s only pulling off that outfit because she’s Miranda Kerr, but that Prada tote is to die for. I think she has one in every fucking color.

I actually don’t hate this gown, though it’s not particularly original. But I think the earrings are too dark and heavy, and she really needed a necklace. And is it just me, or is her eyeliner lopsided?

I hate the neckline and the shoes, but everything else about the look is funky and chic.

This was kind of a yawn, though that photographer screaming his head off over Solange’s shoulder seems to disagree with me. I just thought the combination of the fit and the color and those weird fringy things made this look like an old curtain.

The hemline of this dress is stupid to begin with, but with those boots, it’s even worse. The hair, makeup, and jewelry are flawless and totally Gwen, though, and I think that makes the whole outfit look a lot better than it really is.

This just in: Rooney Mara is just Carey Mulligan with black hair.

I’m sorry, Kylie, but that shirt is fucking stupid.

JULIANNE MOORE at the Cannes premiere
gown by Christian Dior, jewelry by Chopard

I could not hate the shape of this gown more if I tried, from the fit of the bodice to that stupid swirly train. And what the hell is happening with her feet? Why aren’t her pinkie toes actually in her shoes? How can she even walk around like that? I should not have to ask this many questions about your look, Julianne. You are better than this.

One of those dresses that you forget about the second after you see it.

FLORENCE WELCH at the Cannes premiere
gown, purse, and shoes by Miu Miu

Well, this certainly isn’t forgettable, but it might be the most hideous thing I’ve seen in quite some time. We all know I love Florence and the ridiculousness she brings to the red carpet, but once you’ve veered into clown territory, you’ve gone too far.

Need more Gatsby? Catch up on Part 1 of the fabulous press tour!