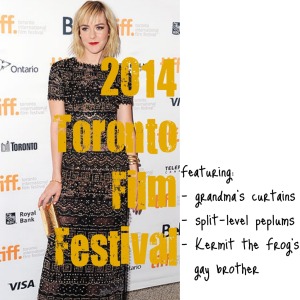 This is what I like to call “dressing your way to the A list.” Jena Malone might not yet be a household name (though I’ve been obsessed with her since Saved! came out a decade ago), but you cannot look at this outfit and see anything but a mother-fucking movie star. The lace and studs work together beautifully, the hair and makeup are similarly rocker-chic, and I really just want to be this woman’s best friend.

My favorite menswear look so far this year. Eddie somehow managed to wear this suit without looking like Kermit the Frog’s gay brother, and that is the greatest achievement of them all.

I know I shouldn’t like those slipper-looking loafers, but somehow I do. Hollywood menswear just gets so conservative and redundant that I squee with delight whenever a man tries for something a little bit outside-the-box. (Except when Pharrell wears shorts to black tie events. Call me old-fashioned, but I just cannot

Keira’s sticking to that hipster-ballerina-chic aesthetic like thighs on a hot day. Hey, if it ain’t broke, right? But she did offer something a little less ethereal and a little more funky-socialite:

I really hate the Chanel logo all over it – didn’t we all agree to stop being such obvious label whores sometime around the early 00s? – but the lines and colors are really fantastic. The collar and the shoes are just fucking adorable.

This peachy color is a dream on her, and the dress makes her look about eleven thousand feet tall. I’m on board.

I’m a sucker for mixing textures, so this eyelet extravaganza is right up my alley. And the touch of metallic in the sandals was a stroke of genius. Anyone else would have gone for black sandals or white pumps, but these two-tone strappy shoes are just the best.

GO AND GET IT, TAMI TAYLOR.

Everything here is working, even the nude pumps. I thought I would never be able to enjoy nude shoes again after celebrities wore basically nothing else for like six months straight a few years back, but they’re so perfect here. They were made for that dress, and the purse tops this look off perfectly.

The dress is adorable, but I definitely wouldn’t have paired it with a black pump.

THE BUTTONS ON THOSE SLEEVES! Is that the cutest fucking detail in the universe, or what? I don’t know why, but I find them ridiculously charming. I guess that’s kind of how I feel about Reese, too.

Maybe if I pray really, really hard, this dress will magically appear at my door in a size six tomorrow morning, and I’ll pair it with my black tuxedo jacket and sensible shoes and wear it to work and take over the universe.

She is quite literally putting the baby in babydoll dresses. I love a draped-but-embellished dress on a pregnant star – it always feels comfortable but chic – and she’s definitely glowing in white. But the bow-adorned shoes might be just a bit too saccharine for an already-sweet look.

This McQueen skirt is a work of art, but I’m not sure its being used to its full potential here. Proportionally, the crop top is kind of insane with it, and she could stand to lose half an inch on the bottom of that hemline.

Points for choosing something interesting, but this “grandma’s window curtains” print is eating her alive.

I think the bagginess of the pants is intentional, but I still hate it, particularly with the tapered ankles. It’s a shame, because I think this suit is kind of brilliant, but it needed a better fit and a different shoe entirely.

That pink fabric looks so depressing, like a Project Runway designer tacked it on in a last-minute panic. But the shoes are funky, fresh, and so perfectly Hailee.

Salma’s husband and his family own the company that owns Gucci, Saint Laurent, and a zillion other high fashion brands. So someone please explain to me why everything this woman wears looks at least ten years out of style. She doesn’t ever look bad, and she rarely wears things overtly offensive, but she’s got more access to fashion than almost anyone else on earth. I just wish she’d take more advantage of her easy access to all things fabulous.

It actually says a lot for how fabulous Toronto Film Festival fashion is, that this perfectly nice outfit ended up at the bottom of the post. Aubrey Plaza looks lovely. But now that the peplum trend has been worn in every way possible, by every human being alive, we’re starting in on split-level peplums? I just can’t. Please, designers, stylists, and stars – just let this trend die.