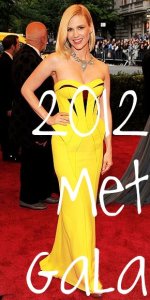 Welcome back to the Met Gala!

Mad Men‘s Betty Hofstadt Draper Francis hit the red carpet running in a gown that definitively puts all the “Fat Betty” jokes to rest. January Jones popped a baby out last fall and is already in better shape than ever before, which is impressive in its own right, but it’s her incredible Versace gown that really stops me in my tracks. It emphasizes her killer rack, her itsy-bitsy waist, her perfect hips – it fits her like a glove, turning a great gown into an unstoppable red carpet look. The sleek hair and natural makeup are a welcome change from her sometimes-crazy styling, but that Cartier necklace really is the cherry on top of the sundae. It’s a piece of art in its own right, and it brilliantly it neither matches nor clashes with that gorgeous shade of yellow. I want more like this in the future, J. Jones! Keep it up.

Are there words for a gown that dishes out this much 1970s disco fierceness? I think there are, but it’s faster for you to just Google the lyrics to any Beegees song. You’ll get the same result. Regardless, Karolina looks like a fucking trophy dipped in pink gold and diamonds, and I am downright obsessed. She’s putting Rachel Zoe’s designs on the map (in spite of her notoriety, I never see anyone but Rachel Zoe wearing Rachel Zoe designs on the red carpet) by treating the Met Gala like her own personal photo shoot, as only a true supermodel can do.

Knocked it out of the park, sister. The back of that gown is ridonkulously sexy and her ass is unstoppable.

Pictures can’t possibly do it justice, but even through the pixelated mess that was the livestream of the Met Gala red carpet, I could not take my eyes off Christina Ricci’s spectacular Thakoon gown. From the front, she was chic and sculptural, a great mix of Prada and Schiaparelli’s aesthetics. And from the back, she was a BOW THAT TOOK OVER THE UNIVERSE! I know, I know, it seems silly in the pictures, but watching that giant bow draped down the red-carpeted steps of the Metropolitan Museum of Art was a MOMENT for me. A moment for me and tiny little fashionistas everywhere who often feel like they’re just too darn short to wear the REALLY dramatic gowns. (Ricci is 5’1, and I always tell people I’m 5’1 on a good day.) Tiny girl to tiny girl, I respect her chutzpah (even though what’s stopping me from wearing a Thakoon gown is not so much height as much as it is price and access). And love it or hate it, this kind of antique-inspired but forward-thinking fashion is exactly what the Met Gala is meant to celebrate.

Spectacular. I’d love to see a tiny bit more in the way of some subtle but diamond-heavy jewelry – perhaps a(nother?) bracelet or earrings. But Cate Blanchett is one of those rare, born-to-wear-McQueen women. Plenty of starlets wear McQueen, but there are far less who I see in McQueen and I think, “Ah, yes. McQueen himself would have liked you wearing his work.” When I saw last year’s Costume Institute Exhibit (McQueen: Savage Beauty), which was a life-changing experience, I came across a quote from the man himself: “I want to empower women. I want people to fear the women I dress.” That’s the feeling I get when I see Cate in McQueen, and that’s why I love this look.

Black Givenchy was a surprise hit at the Gala – Gisele is glowing in it above, and Rooney Mara, Alicia Keys, Liv Tyler, and Beyonce also donned black ensembles by Givenchy for the occasion. I’m loving this gown on Gisele, hugging her delicious curves without showing off too much boobage. (Gwyneth’s sideboob and Lea Michele’s sternum, I’m talking to you.) Love the chicness of the slicked-back hair and natural makeup. And the cut of the dress is perfect, with the dramatic ruffled hemline and the knee-high slit. Perfect shoes, perfect body, perfect man candy in a gorgeous navy crushed velvet jacket – it’s good to be Gisele (as if we didn’t already know that).

The Belle of the Met Ball was, as always, Anna Wintour. I nominate her for Best Adherence to the Theme for her custom-made Miuccia Prada gown with a bejeweled and beaded giant freaking lobster on it that Schiaparelli would have adored. Until now, Anna had worn Chanel to every Met Gala since 2007, so this was quite a departure. But the rest of her uniform (fur stole, statement necklace, shockingly perfect bob and presumably Manolo Blahnik kitten heels) was as, well, uniform as ever. She’s pulling this off the way only the editor of Vogue could pull something this absurd off – she’s in a gown worth many, many thousands of dollars and it has a giant crab on it, but she’s got that wry, wise look in her eyes that tells you she’s in on the joke, if there even is one.

Never before – literally, never before – have I liked what Solange Knowles is wearing. On any given day, she dresses like a blind hipster grandma during an acid flashback. But somehow she whipped a perfect yellow Rachel Roy peplum gown out of her closet, donned her fabulous ‘fro and metallic accessories, and she looks fantastic! Kudos to the woman who’s finally dressing like she’s worthy to be the aunt of Blue Ivy Carter, the most powerful celebrity baby since Her Highness, Queen Suri Cruise.

Hard to tell in this photo, but Katharine McPhee’s hair was a straight-up disaster. It was a disservice to this mega-fucking-beautiful orange Elie Saab gown that oozes old Hollywood glamour. In fact, this is the most like Marilyn Monroe she’s ever seemed (because it’s a total joke that Smash thinks Katharine McPhee can even compete for the role of Marilyn with the diva powerhouse that is Megan Hilty). But her lack of talent aside, this is a totally fantastic gown and it’s lovely on her, even if the three different shades of gold accessories with an orange glittering gown are a bit much.

Delicious, but the seam down the center is distracting and the train doesn’t seem necessary. She looks beautiful and elegant, but it’s a predictable look from her.

Another beautiful woman in a gorgeous-but-predictable gown. She looks younger than she has in ages, and her purse is fierce, and the gown fits her beautifully, but it’s certainly nothing we haven’t seen before.

The cowl neck in the back is lovely, but the seaming in the gown does make her appear to be – how shall I say this? – pooping liquid gold.

Another black Givenchy ensemble! From the top of her head to the top of her pelvis, Alicia looks killer. The slicked-back hair with the statement earrings and red lips is a dramatic look that works well on her, and her Givenchy double-breasted peplum blazer is to die for. Unfortunately, those pants make it seem as if she’s hiding a ridiculously large penis beneath them, or possibly a rodent or small woodland creature. I mean, that is a LOT of extra fabric around her vagina. What on earth could she be keeping in there? And the shoes are sexy, but the way the pants appear to be tucked into the shoes is not.

I think the reaction she was going for was, “Wow, that’s by Topshop?! I’d never believe it!” But my reaction was more like, “Yep, that’s by Topshop, because no designer at the Met Gala would use this cheap-ass tacky red satin fabric.” I actually think the silhouette is gorgeous on her, but when everyone else is in custom-made couture, something this cheap-looking just can’t quite cut it. And though she’s finally found a normal hair color, she’s clearly a student of the Katharine McPhee School of Not Getting Your Hair Done for Fashion’s Biggest Night of the Fucking Year.

Mega-flattering, but underwhelming for such a big event. Where’s the drama? Where’s the high fashion?

It’s very expected – Rashida loves Tory Burch and slightly sad florals. It’s lovely and romantic, but she’s so much hotter than this dress would have you believe. It does nothing for her figure and it’s yet another washed-out color.

I applaud your bravery, Diane, but no. This is a dress for a pregnant Muppet.

That’s actually a gorgeous suit. Too bad she paired it with that cheap wig, that awful shade of lipstick, and those truly unfortunate shoes.

Democracy Diva Rule of Fashion: If you’re going to wear a dress we’ve seen a thousand times before, you better do it perfectly. Leighton Meester, you have broken that rule, and are hereby sentenced to Democracy Diva’s Fashion Rehab. This will require complete and immediate abstinence from illusion netting, heavy-handed makeup artists, excessive layers of tulle and/or crinole, and gowns that are total McQueen rip-offs. It will be a tough road, Leighton, but we’ll take it one day at a time.

Sweet JESUS, this chick is boring.

During the livestream, when Kristen Stewart glared at the camera looking glum as ever, I literally shouted at my computer, “THEN DON’T BE HERE! If you’re going to look this fucking miserable, LEAVE!” (Seriously, this happened. Ask my boyfriend.) Her just-rolled-out-of-the-crack-den hair and almost-cool-but-not-quite-getting-there dress aren’t good, but those shoes – they hurt me. It literally pains me to look at them.

I did not know that Dracula had a teeny tiny little gothic grandmother, and I have no idea why Mary-Kate would choose the Met Gala of all events to use her as a style icon, but there you have it, dear readers. At least she stuck to the peplum trend – that is, if an apron counts as a peplum.