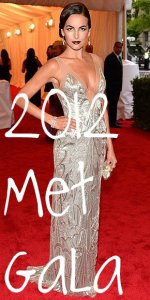 Our relentlessly bitchy coverage of the Met Gala is drawing to a close, but don’t shed those tears yet, dear readers. You’ll need all your energy to judge the fugly and fabulous fashions you’re about to see.

I rejoiced and clapped and fanned myself like I was in a southern Baptist gospel choir when Camilla hit the red carpet in this luscious gown. Her look, like Beyonce’s, is living proof that when illusion netting is used properly and sparingly, it can be dramatic and gorgeous instead of making you look like an ice dancer. The gown is so lovely and fits her like a glove; the styling is old Hollywood perfection. And the lipstick – oh, the lipstick! A stroke of genius, truly. It brought the already dramatic-diva-glam look to a new level. She could hold her own against Lady Mary in a Battle of the Fiercest Eyebrows – and that’s saying something.

It’s been forever seen we’ve seen the adorable fifteen-year-old fashionista on the red carpet – I think she’s been eclipsed by Chloë Moretz (in which case, I’m on Team Steinfeld, because as a fellow Jewish brunette, I too have been eclipsed by many a blonde shiksa). Anyway, Hailee’s been the face of Miu Miu before (remember how fabulous she was in their Fall 2011 campaign?), and Miu Miu is owned by Prada and named for Miuccia Prada, the Gala’s honoree. So I’m not surprised, but still thrilled, that she picked Miu Miu for the event, and this gown is just spectacular on her. Whimsical and ethereal and romantic, and so refreshingly age-appropriate. She’s got Disney princess hair, the natural makeup is lovely and subtle, and she’s just so goddamn darling it’s impossible not to love her. Come back to the red carpet, Hailee! You’re a breath of fresh air at these events, truly.

I never really considered Ivanka Trump a style icon – in fact, I don’t think about Ivanka Trump much at all. (Although my mom ran into her on the Upper East Side a few years ago, and Ivanka was very nice to her. So that’s nice.) But holy hell, did she pull out allthe stops for this event, looking like a true NYC socialite in the best possible way. The crushed velvet gown is gorgeous, but the subtle pinstripes in that lush navy fabric? Incredible. The cut-outs are on-trend, dramatic, and sexy, and the styling is damn near perfect. Plus, she’s being photo-bombed by Amy Poehler, so you have to love that.

Amy was lovely in her gown, but to me, that’s a big movie premiere gown, not a Met Gala gown.  I love it, but I’d also love to see her surprise me just a little bit more. The earrings and purse are perfection, but the makeup is a tad heavy-handed. Still, she’s the rare grown woman who can make a giant bow look stylish instead of twee.

YUM, Kristen! You are simply ravishing in that gorgeous orange lace, and I can’t believe I’ve finally found a Stella McCartney dress I actually like! Now that you’ve mastered the basics, darling, it’s time to work on the details. A cocktail dress at a black tie event can work – if you dress it up with the right accessories, which you did not. The clutch, shoes, and earrings could all be worn casually; she needed diamonds, a sparkly clutch, a sexier shoe, something to keep it a little more formal. But she’s made massive strides in her style lately, so let’s applaud the fabulous dress and impress upon her the importance of pairing that dress with the right accessories.

Yes, Rooney, we get it. You like black Givenchy. It’s all you wear. But between you constantly wearing black Givenchy, and a half dozen other stars wearing black Givenchy to this event – this is so disappointingly expected. You don’t get to pull out the same red carpet tricks time and time again, Rooney. Your severity is off-putting, and you need to put a fuck of a lot more work into styling a gown this beautiful – especially when you’ve worn such similar gowns before.

During the livestream, I thought the train was downright ridiculous, and the straps on the back looked very desperate and cheap. In photos, though, she looks so incredibly beautiful that she has me convinced that she’s a movie star and not a Degrassi-turned-CW star. It’s certainly not my style, and I’m still thinking it’s a little on the tacky side, but she is working it like her career depends on it. Which it probably does.

I want to like this, Elizabeth. I love you, and you’ve been such a risk-taker on the red carpet this year, and it’s been a pleasure to see you in outfit after fabulous outfit. This, while incredibly interesting, is also basically hideous. She’s actually coming damn close to pulling it off, but it’s got more than one too many design elements, like every Mary Katrantzou dress I’ve ever seen, and the center slit doesn’t work for me at all.

Sorry, Ms. Banks, but that silhouette is ridiculous. Your badassness is applauded, but your dress needs to burn in a fire.

It’s a stunning color and she looks killer in the gown, but it’s far too underwhelming for the Met Gala. I know Kristen’s got a sort of laid-back, California-girl style, but it’s just not dramatic enough for me. I like the detailing on the dress, and she really does glow in it, but it seems very beach wedding rather than NYC red carpet.

This was my Spring 2012 couture red carpet prediction for Keira Knightley, on whom this would’ve been stylishly grandma-chic. But on a girl playing dress up for her Snow White film, it’s just terrible. She looks like a child bride.

Mia, you’re twenty-two years old. You’ve got the rest of your life to wear matronly gowns that make you look like you’re wearing stilts. Why not live a little?

This gown (in silver) was my Fall 2012 red carpet prediction for Jennifer Hudson, and I stand by that prediction. I’m not loving it on Kate – the fit is kind of terrible and the makeup is even worse. It’s very obvious that she’s a red carpet newbie – she’s just not ready to play dress up with the big girls at an event as huge as the Met Gala.

That is one mega-unflattering silhouette, Debra. It makes you look like you’re no breasts and all hips, when only half of that is true. The color comes across as kind of dingy, and the accessories she chose are all wrong. Why so dark and dreary, Ms. Messing? Your hair is as perfect as ever, so hit the red carpet with guns blazing next time and all will be forgiven.

This dress could work if it were cocktail length, but as a gown, it’s downright hideous. The wacky print, the too-tight fit, the leather accents – maybe in the right fit, on a different star, but she’s too young and adorable for this much weird, ugly fabric.

I have so many questions, dear readers. What on earth is the beautiful Jessica Chastain DOING in that hideous, ill-fitting, wrinkly nightmare of a gown? What’s with that awful shade of lipstick? Where are her eyebrows? And why, why would she pick the Met Gala to debut the ugliest gown she’s ever worn? I am heartbroken, Jessica. Make immediate reparations in the form of something fucking fabulous.

What a predictable move for Heidi: a vag-high dress, covered in lace, slit up to her ass. And I’d say I don’t like the styling, but I don’t think you can really call what’s happening here “styling.” Throwing fifteen necklaces and forty bracelets on a supermodel does not an ensemble make.

The hair is beauty pageant to the max, the gown resembles a bathrobe, and the shoes and purse are simply hideous. Don’t let me down like this, Claire! You are destroying the mega girl crush I’ve had on you since I first saw My So-Called Life!

Honestly, Brooklyn’s so boring that I can’t see anything in this picture other than how killer January Jones looks in the background. She’s not even posing for this camera, and January is STILL stealing the scene away from the dull lady in her ordinary dress.

She got the trends right – orange, peplum, Prada – but she also looks like she’s wearing hideous upholstery from the 1980s. I consider that a problem, Eva. And we all expect a shitload better from the woman dating Ryan Motherfucking Gosling. You have to earn your right to stand by that delicious man’s side, by hitting the red carpet in something fabulous instead of whatever the hell this vintage Halloween costume is.

This is an assault to my eyes. I will not even dignify this outfit with a response, Lena. I will simply give you three words: HIRE A STYLIST.

She’s wearing a cape. Not a fashionable cape, but a brewing-poisons-over-cauldrons, full-on creepy witch’s cape. And that lipstick is even more terrifying. Honestly, I can’t look at this photo any longer without guaranteeing myself several nightmares, so dear readers, I think we’re done here.