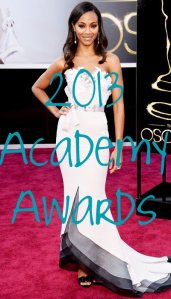 Let’s celebrate the most star-studded event of the year the only way we know how – with a healthy dose of judgmental bitchery.

KILLING. IT. From fabulously coiffed hair to perfectly polished toe, Zoe Saldana knocked it out of the fucking park. I love the embellished bodice, the mega-flattering belt, and of course, the grayscale skirt. She’s chic and modern, without sacrificing formality and glamour. It’s Oscar-perfect.

When your naturally flawless looks have the additional benefit of stunning hair and makeup, you could wear a trash bag and still look good. But Jessica didn’t let her perfect features do all the work – this exquisite Armani gown did plenty of heavy lifting itself. The fit is flawless, but the detailing of those ivory-white glittering, almost spiderweb-like stripes against that champagne-colored lining is just incredible.

Modern, interesting, and mega-glam. I’m not sold on the boy band hair, but the color and cut of this dress are refreshingly unique, and the bracelet is gorgeous.

I don’t think I’d like this look on anyone else, but this color is so goddamn heavenly on Fan’s porcelain skin, I can’t even handle it. The matching lipstick and bracelet are brilliant instead of overwhelming, and I even like all the crazy volume and draping and the ridiculously long clutch. I think the hair and makeup are what make this look work: Fan commits herself 100% to every look she wears, and you can’t go wrong when you’re selling it this hard.

I’m very torn on whether the shoes are brilliantly interesting or house slippers, but everything above the ankles gets a definite YUM.

Jane Fonda, women young enough to be your granddaughters can only DREAM of looking this good on the red carpet. That yellow color is stunning, the rouching and detailing in the middle is gorgeous, and the purse is to die for. Congrats on proving that divas, like fine wines and George Clooney, only get better with age.

There seems to be a weird Batman-looking patch in the center of the gown, but other than that, I think this is beautiful and interesting, particularly with the spirals cascading down the bottom. And the fit and silhouette of the straps and bustline look incredible on her.

He’s precious, but there are some proportion issues here. The tie is too short and wide, the lapels are too skinny, and the jacket pockets seem very oddly placed.

It would have been much more chic and way more flattering with one less design element, but it’s surprisingly lacking in desperation for a Halle Berry look. So that alone is a vast improvement, even if the fit in the stomach is terrifyingly tight.

I’ve seen enough high gold necklines on the red carpet to last me quite awhile, but this silhouette really works on Salma. And she looks about a foot taller than she actually is, so that’s also quite an achievement.

We should all live to be 70 years old, still performing our hearts out, and still covered in tons of gold jewelry, just like Babs, Diva of all Divas.

The dress is a phenomenal color – one of the best shades I’ve seen on the red carpet in a long time, actually. But the fit is off and the matchy-matchy accessories are awful.

The earrings are distracting, and the gown is about as standard as red carpet wear gets. Nothing even remotely surprising to be seen here.

Lovely, but a little dull and slightly matronly.

The darts on this gown were a huge mistake, since they were impossible to distinguish from Anne Hathaway’s nipples on the red carpet. I don’t know why the dress has a seam right below the bust AND at the waist, because it throws the proportions off completely and it’s terrible unflattering. And that skirt hangs there like a stiff curtain. The jewelry was beautiful, but the rest of this look was too complicated for its own good. And it only got worse from the back:

That’s just WAY too many design elements, from the backwards necklace to the cross-straps to the bow to the cut-out BELOW the bow to the slit below the butt. Anne was supposed to be wearing Valentino as of hours before the show, but apparently switched to this at the last minute. Well, we can tell it was a last-minute decision, Annie, because the longer I look at it, the more it looks like a straight-up mess.

Probably the best Kelly has ever looked, and it’s still pretty awful.

Did no one mention to Samantha that hair styling and makeup are required for the Oscars? I mean, the incredibly boring gown barely meets the wardrobe requirements, but with virtually nothing to dress up the look, you can’t even tell she’s at an awards show. That’s one hell of a missed opportunity for someone who could have used this show and the entire Les Mis press tour to say, “I might not be a household name yet, but I’m going to look so good you’ll NEVER forget who I am again!”

By far the worst she’s ever looked. The hair is atrocious, the draping of that dress is very poorly done and does nothing to flatter her. She should have nixed everything but the purse and started all over again. Whoever did this to the amazing Melissa McCarthy should be banned from styling any and all red carpet events for the rest of his or her life.

HAIR STYLING. MAKEUP. THESE ARE NOT FUCKING OPTIONAL, YOU LAZY BITCHES. THIS IS THE OSCARS. SHOW SOME GODDAMN RESPECT.

A beautiful dress destroyed by the world’s worst accessories. The blue of that dress is so interesting and lovely, but by pairing it with those atrocious peep-toes and matching purse, she killed any chance she had at looking stylish or glamorous. Now she just looks as cheap and tacky as a Donald Trump-sponsored beauty queen.

You really need the rear view to get the full effect, I think:

Stop doing this to us, Amy. Stop resting on your laurels and thinking, “Well, I myself am flawlessly beautiful, and thus I do not need to wear a dress that fits me, flatters me in silhouette or color, or has anything interesting or unique to it whatsoever. I also don’t need to bother with hair styling and makeup, since I alone glisten and glimmer when I walk down the red carpet, regardless of how I look.” You are WRONG, Amy. I don’t give a fuck how much of a pretty, pretty princess you are – you need to put in way more effort than this if you want this Diva on your side.