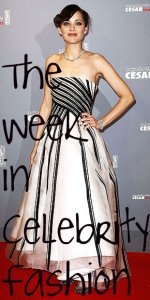 It’s spring break, dear readers – that means there’s plenty of time to blog and to judge.

Marion Cotillard is clearly a huge Democracy Diva fan, because this was my Spring 2013 couture red carpet prediction for her, and it came true, bitches! (I mean, she wears so much Dior, it was really only a matter of time before I predicted the right Dior gown.) Just DEAL WITH her studded shoes and incredible diamonds and utter French fabulousness.

I would have liked maybe one less giant layer on this gown, but it’s still a dramatic and spectacular look. I think Mila could do with a change in her hairstyle, though. She’s been rocking that look for a little too long.

This was my Pre-Fall 2013 red carpet prediction for Duchess Kate, and I simply adore it on Emmy Rossum. But those two-tone aqua and emerald pumps are just to die for. I’ll be dreaming about them for weeks.

ALLISON WILLIAMS in Boston
top and skirt by Prabal Gurung, shoes by Schutz

I’m not sold on the belt – I think the placement of it throws off the proportions of this a little bit – but it’s by far the most interesting thing Allison’s ever worn. I love this Prabal Gurung print, and the shoes are lovely.

It’s a beautiful dress, but it so called out for accessories with a pop of color or shine. At least something to offer some contrast. Also, this slick center-parted hair style is supremely unflattering on her.

ANNA KENDRICK at SXSW
jacket and shorts by Marissa Webb

Look at you and your little business shorts, Anna! How adorable! I’m all about the tweed and the pop of green, but I feel like the accessories go with a different outfit.

The top is fun, the skirt is interesting, and the shoes are a fucking work of art. It’s a lot to take in, but those shoes are INSANE in the best possible way.

VICTORIA BECKHAM in London
dress and coat by Victoria Beckham, shoes by Chanel

The dress is cute, but it’s a slightly funny length, at least with those shoes.

I loved this look until I realized she was wearing green shoes. Why, Olivia? Why would you do such a thing?

Emma, stop over-adorning yourself. You can’t wear two necklaces over a dress with a boob embellishment over a t-shirt with a shoulder embellishment. And I hate your shoes.

MIRANDA KERR in Los Angeles
jacket by Stella McCartney, jeans by Nobody, sunglasses by Miu Miu, purse and shoes by Givenchy

I want to rip those sunglasses off her fucking face and steal them FOREVER.

I love the color of this dress, but the shininess of the fabric seems really cheap and it brings down the entire look.

Quick, someone, get help! BLAKE’S BOOBS ARE MELTING INTO A GIANT PURPLE BLOB OF GLITTERY LAVA.

Understated but chic. Love the skirt.

At first glance, I really liked this dress. Then I noticed the color of the shoes, which are just a little bit off from the color gray in the dress, and it’s absolutely killing me. And then I noticed the way the fabric sort of tucks around and under her boobs – like, does the white part only cover one of her nipples? Is that on purpose? What is going on here?

ROSE BYRNE at SXSW
top and skirt by Balenciaga, purse by Chanel, shoes by Lanvin

The skirt is cute, but it looks like it’s made out of plastic. I don’t like that peach color on Rose, and I think the accessories are kind of needlessly tacky and distracting.

You are not 1960s Malibu Barbie, Selena. Calm down.

I didn’t think I needed to state that elastic-band bras with droopy straps were unacceptable on the runway, but apparently, I was wrong. WHAT ARE YOU DOING, FLORENCE? I know garbage-chic is sort of your thing, but good LORD. I’m afraid I’ll go blind if I look at this for much longer.

One response to The Week in Celebrity Fashion