Only eight fabulous ladies left to battle it out for the title of Fabbest of them All.

Diane’s dress by Versus, shoes by Jimmy Choo; Zoe’s top and shorts by Prabal Gurung, shoes by Nicholas Kirkwood

Diane: I’ve been looking forward to this match-up for weeks, Zoe. From one actress who’s more known for what she wears than who she plays to another, good luck.

Zoe: Who needs luck when you’ve got Prabal Gurung on your side? 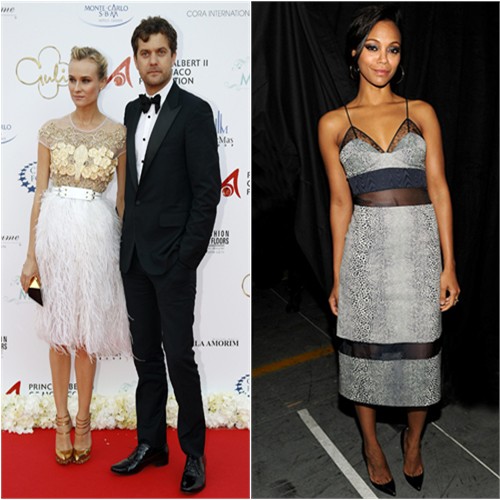 Diane: Hate to break it to you, but I too have Prabal Gurung on my side – or rather, on my body, with Joshua Jackson by my side.

Zoe: Even I can admit that there’s no better accessory than Pacey Witter. Nicely done.

Diane: Yes, he’s wonderfully good about suiting up to be my arm candy, even if he usually looks like he’d rather be at home in a bathrobe smoking a joint.

Zoe: Yeah, I was going to say, he looked a little – well, he looked stoned as shit, Diane.

Diane: Oh, like you never sparked one on the set of Avatar? There’s no way I would have gotten through the filming of that movie sober, that’s for damn sure.

Zoe: I’ll admit, I got a lot of blue lipstick prints on a lot of bongs during the filming of that movie. 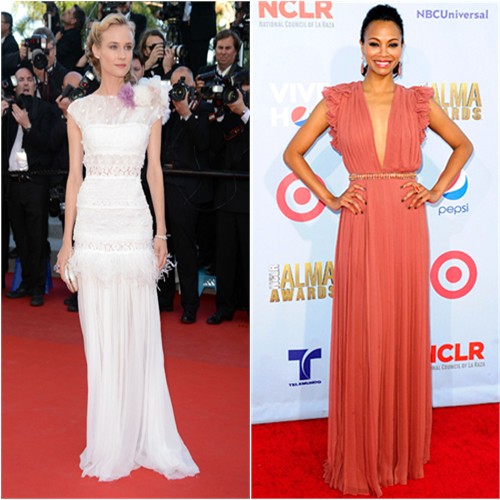 Diane: Well, since we’re being all open and honest with each other, I might as well admit that even though I want to fashion-murder you in this battle, you’re simply glowing in that shade of coral.

Zoe: And I don’t know another woman in Hollywood who could pull off that bridal gown on the red carpet, so kudos to you. 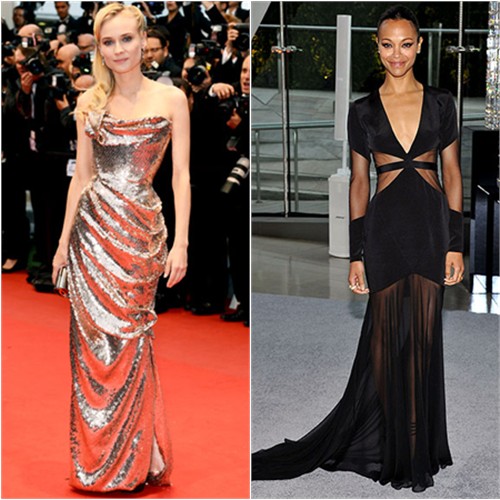 Diane: When you’re as statuesque and stunning as we are, you can pull off just about anything.

Zoe: Oh, me and my side cut-outs are very much aware of this phenomenon. 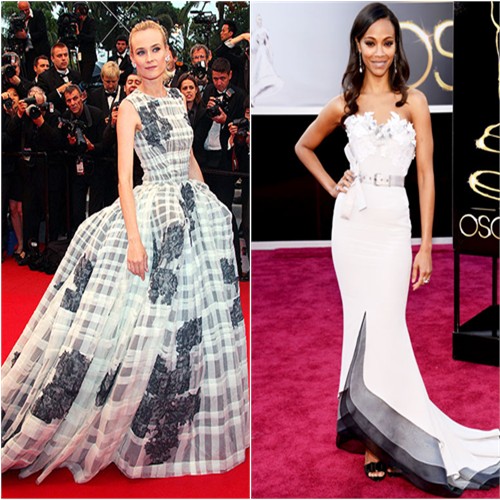 Diane: And we can both do black-and-white couture like champions. Let’s call it a day and get some cocktails, Zoe.

Zoe: Indeed. To my victory and your defeat!

Elizabeth: Well, well, well. If it isn’t Ms. Katniss Everdeen. After all I’ve done for you as your escort, you would dare to challenge Effie Trinket in a fashion battle? 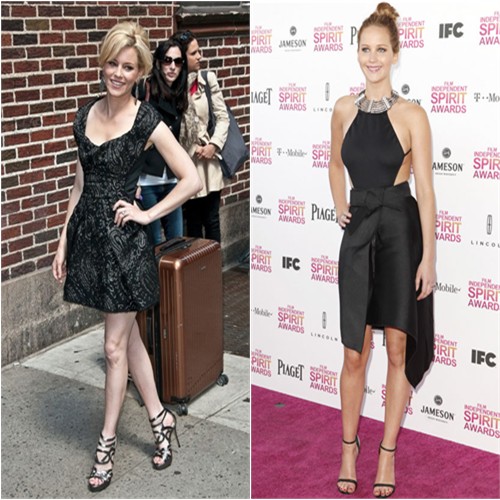 Elizabeth: You were nothing before I rescued you from abject poverty and obscurity and made you into the superstar you are today! Don’t make me get my pink wig out and show you who’s boss.

Jennifer: Fine, I’ll play along. As long as I’ve got Cinna as my stylist, and you’re still running around in ridiculous sparkly things, I’ve got no reason to lose.

Elizabeth: You’re just jealous because my dress looks WAY more ‘Girl on Fire’ than yours does.

Jennifer: I’m so over all that. Now it’s all wine-colored lips and dark, majestic tie-dye.

Elizabeth: OVER that? How can you be OVER bright colors and flame-like sparkles?

Jennifer: Apparently, YOU can’t be. But I can.

Elizabeth: Fine. If you want to go all serious actress on me, I’ll gladly take on the flammable gowns. I mean, doesn’t this heavenly McQueen look like a watercolor of fire?

Jennifer: Yeah, sure, but when you’re gunning for an Oscar, you need to go more old Hollywood than new-wave glamour.

Elizabeth: Did you really need to bring the Oscar with you to emphasize the point? I mean, you’re basically shoving it in my face.

Jennifer: Not at all! I just wanted you to see how amazing it looks with my Calvin Klein gown.

Elizabeth: Yes, yes, you’re very talented and fabulous. But look at me in this perfect gown – can’t you just hear Alicia Keys screaming, “THIS GIRL IS ON FIIYAAHHHHHH!” in your head?

Jennifer: Dude, I never STOP hearing that song in my head. It’s actually becoming a problem.

Fan: I’ve got no time for introductions. Only one of us is getting out of this battle alive and making it to the coveted Final Four, and that fabulous woman is going to be me.

Emma: Not if I’ve got anything to say about it. You best back up before my hunter-green peep-toe platforms find their way up your ass.

Emma: My gorgeous pink double-strap shoes are more fabulous than those sad black pumps of yours could ever dream of being.

Fan: Fine. You want me to pull out the big guns? You got it. I’d love to see you work a leather jacket with a printed gown as well as I do.

Emma: Whatever. Your glasses are totally nerdy, and I like my little white dress better anyway. 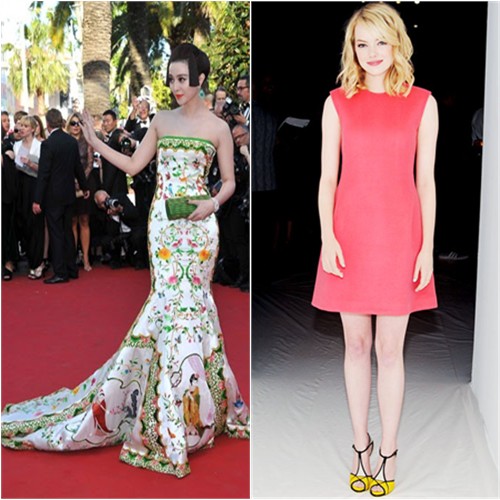 Fan: You know what your problem is? You have no imagination. Look how intricate and detailed and crazy-awesome my dress is – now look at yours.

Emma: I happen to look amazing in this shade of pink, and don’t pretend you’re not fully obsessed with my shoes.

Fan: You call that an Elie Saab look? Honey, that jumpsuit can’t even COMPARE to my total dream of a ball gown.

Emma: Uh, does your gown have a cape attached? What are you, a fucking superhero?

Fan: Yes. I am a fashion superhero, ridding the world of hot messes like yourself and donning stunning gowns in every color of the rainbow.

Emma: Hot mess?! Show some respect. This is CHANEL.

Fan: Fine. You might not be a complete disaster, but you’re still nothing compared to me.

Emma: We’ll let the dear readers have the final say on that. 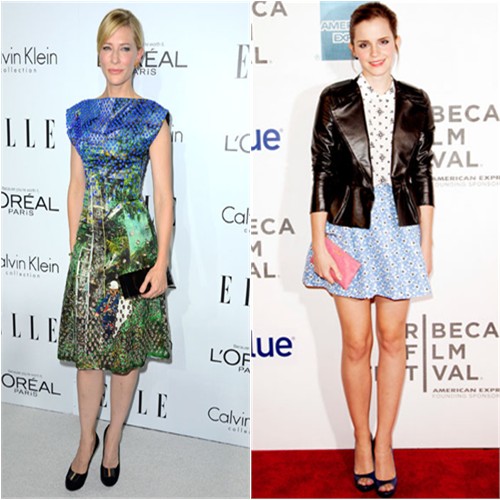 Cate: So, you’re it? You’re the Emma Watson everyone’s been raving about? I’m sorry, but I just don’t see it.

Emma: Excuse me? See what?!

Cate: I just don’t see what makes you so fabulous that you’ve won this brutal fashion battle we call March Fabness not once, but twice before. I can outdress you in my fucking pajamas, little girl.

Emma: Oh, you think so? Because I think you’re stuffy and pretentious and just all-around weird.

Cate: I take all of that as a compliment. Especially coming from someone wearing that nightmare of a dress.

Cate: Whatever. I’m just saying, I don’t think you’re as stylish as everyone else seems to believe.

Emma: Then I guess you haven’t seen the chain-straps on my Tom Ford shoes. Because they are nothing if not stylish.

Cate: I just can’t believe you expect to be able to compete with a McQueen creation worthy of the Met Gala when you’re in some little floral shift.

Emma: Because you look like a scary bird, and I look adorable.

Cate: Maybe my aesthetic is a little too conceptual and high-minded for someone as low-brow as yourself, sweetheart.

Emma: Maybe you look like an elf even when you’re not filming any of the Lord of the Rings movies, and I find that terrifying.

Cate: Your reign ends here, Emma. You might think you’re all that, but there is nothing in the world better than this red Armani dress.

Emma: We’ll see about that, Cate.