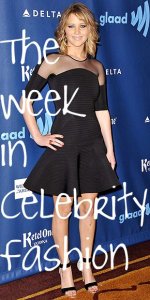 Welcome back, dear readers! Let’s enjoy another judgment-filled trip down the red carpet.

Katniss got a haircut and it’s the only thing we need to be talking about this week. Honestly, there’s nothing more hilarious than the entire blogosphere exploding over her “long bob” (um, hello, I think that’s just called medium-length hair), but I do love it. Her eyeliner is fantastic, and this dress is all kinds of cool, and her body is unstoppable in it. It’s going to be a LONG six months for me until Catching Fire hits theaters, but if those six months are filled with J.Law being fabulous all over the red carpet, well, that’s more than worth it for me. Let’s get another angle so we can see the fabulous shoes a little better:

BAM. Killing it with a mother-fucking bow and arrow.

A touch more makeup would have been very welcome – I think blonde girls in particular need mascara so that their eyelashes don’t look invisible – but I love this look from the neck-down. I like that she’s not dressed in 1920s drag – not that I don’t love the flapper thing, I just think that if she were only going to wear Gatsby-like looks over the next few weeks, we’d get bored REAL fast. Anyway, this Le Smoking tux is all kinds of delicious. But I think she could have added a bracelet or a slightly more glittery pair of shoes.

The stars of the Carrie remake hit the red carpet looking way, way happier and more beautiful than their characters should ever look. Julianne’s Dolce LWD is perfect, and I’m kind of obsessed with her shoes – usually I hate clunky, distracting black shoes with light-colored dresses, but something about this just works. And Chloë’s all kinds of adorable – I like this darker hair color on her, and her dress is super-cute. The orange bracelet is kind of out of left field, but it’s a very sharp look otherwise.

Scrape off half the makeup and put a little de-frizzer in the hair, and this would be one of my favorite looks ever. I’m absolutely obsessed with this jumpsuit on her – and you know that’s a difficult thing for me to say, since I’ve been lamenting the rise of jumpsuits for what feels like a hundred years. But the oversized sleeves and the pockets make this all kinds of adorable. I think I’d quibble with the matchy-matchy gold accessories on someone older, but I think they’re very cute on Hailee.

I think I want to dislike this just by nature of it being Kate Hudson, but you know what? This is kind of nice. I think if you’re ever going to wear that Tiffany blue, it might as well be at a Tiffany event, right? And she does absolutely glow in that color, even if it is a touch on the bridesmaid side. But the purse and jewelry are lovely, so overall, I think it’s a pretty good look.

Lose one of the bracelets and have more fun with the shoes. Otherwise, I love this.

Evan Rachel Wood: looks better six months pregnant than she did pre-pregnancy. How the hell does she do that?

This was my Fall 2013 red carpet prediction for Fan Bingbing, who would have rocked this infinitely harder than Jessica Biel. It’s still a beautiful gown, but it’s too long, and I think the belt should have been navy instead of that distracting lighter blue. Also, girlfriend needs to lay off on the lighter-than-natural lipstick. It’s just not her look.

Whatever. The jumpsuit is nothing special, and the belt is downright awful.

Surprisingly matronly for the usually fun-loving Effie Trinket, no? It’s not terrible, it’s just a little disappointing. And boring.

KATY PERRY in Hollywood
dress by Suno, shoes by Aldo

That is one of the stupidest dresses I’ve ever seen, but kudos to Katy for almost pulling it off. Love the shoes, but not with that dress.

I don’t know what’s worse – the fit of this dress, or the styling.

I don’t understand why anyone wears dresses with those sloppily tied-together cut-outs. I have literally never seen that trend done in a way that is even remotely aesthetically pleasing. It just makes everyone look like they’re wearing beach cover-ups instead of actual clothes.

You’re the worst, and you should stop wearing bracelets that go over the sleeves of your dress.

This is stupid. There’s “look how good I can look in weird things because I’m a hipster,” and then there’s dresses that are just awful to look at. This, clearly, is the latter. And that hair – is she in a boy band in the late 90s? What other excuse could there be for that hair?

Cute dress, but the shoes don’t go with it at ALL.

She only pulls this off because she’s Salma Hayek. Anyone else would look like they had a seizure in a fabric store.

This just in: Gumby-chic is not a thing, and will never be a thing. So please, starlets and mere mortals alike: DON’T WEAR ANYTHING LIKE THIS. EVER.

2 responses to The Week in Celebrity Fashion