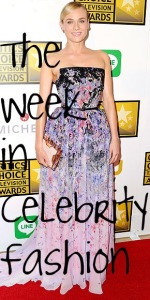 Diane Kruger pulled a Diane Kruger, which is my phrase for when someone wears something ridiculously beautiful but also a little bit too strange for anyone else but Diane Kruger to pull off. I want to suffocate myself in this glorious floral print, it’s so fucking beautiful. And while mere mortals would look silly in those exaggerated hips, they’re just regal enough for Ms. Kruger.

Did anyone know that Felicity was capable of pulling out all the red carpet stops? Because honey looks FLAWLESS. And her sexy gown has pockets, making her my new personal fashion superhero.

Mean Girls’s Janis Ian in a romantic butterfly-adorned Valentino gown is still a difficult concept for me to wrap my head around, but I absolutely adore this.

Classic and elegant, but not exactly mind-blowing. But it does somehow make this 5’3″ star look about eleventy feet tall, so that’s a plus.

NATALIE PORTMAN in Shanghai
dress and purse by Christian Dior

Eh. Pretty, but not exactly revolutionary. If you’re going to wear nothing but Dior, at least surprise me in terms of print or color or silhouette.

I feel like I’m supposed to hate those shoulders, but you know what? I think Rose Byrne is werqing that shit with aplomb. I adore the skinny belt, which I think helps balance out those giant shoulders, and the styling is remarkably chic.

So fucking effortlessly chic, like hipster-fashion is supposed to be, but almost never is.

She never wears anything but little black dresses, but at least this is a sexy, interesting one. Love the gold shit around the neck and the hint of sideboob.

I predicted about a year ago that Chloë Moretz would wear this exact dress, because I am a motherfucking red carpet PROPHET, bitches. And if you ignore the hideous purse, which was sort of required because Coach co-sponsored teh event, this is one of Chloë’s best looks yet. Stop by the blog more often, girl. We clearly make a good team.

Modern, funky, and sexy, but the shoes make me sad.

Points for originality, but this is a big old mess.

Sporty-chic and adorable. Also, this woman just gave birth like two months ago. GO AND GET IT, HONEY.

I think the gray-white dress with ivory printed shoes is a little confusing, but mostly, I think I just don’t like Cameron Diaz’s face and so it makes me hate everything she wears. I might not be fair, but at least I’m honest, dear readers.

Ginny Weasley hit up the opening of the new Harry Potter World wearing her favorite designer, Miu Miu. The earrings are a little distracting, but the dress is adorable. Are those unicorns? I don’t know, and I don’t care. They’re awesome.

If it were me, there would be coffee stains all over that fucking purse. But apparently Jessica Alba is like, a normal human being who can wear white without spilling on it. I will never understand this.

A copper dress with gold accessories isn’t a great idea to start with, and I think these colors make Jessica look awfully orange. But my biggest problem with this look is the ugly seaming in that dress, which puckers and cuts her in awkward places.

No. Those earrings are just ridiculous. Go home, Emmy Rossum, your jewelry is drunk.

… I mean, or you could wear a dress that fits. Just a thought.

What is that yellow cape? Is she a hipster superhero? And these accessories are a nightmare. I don’t even know what to insult first. (Well, I guess that’s not true, because the cape already won that battle.)

SOMEONE CALL AN AMBULANCE. COCO ROCHA HAS SOMEHOW LOST BOTH HER ARMS. OR IT IS POSSIBLE SHE IS DISGUISING HERSELF AS AN OLD-FASHIONED COUCH TO HIDE FROM DEATH EATERS À LA PROFESSOR SLUGHORN.

4 responses to The Week in Celebrity Fashion, Part 1