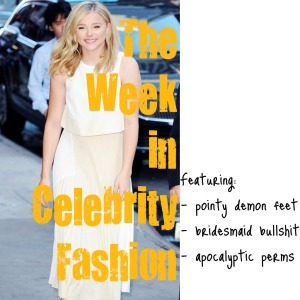 It’s been a long week. You deserve a nice, judgmental vacation.

Teenaged superstars: they grow up so fast. As Chloë Moretz stares old age (read: turning 18) in the face, her style has progressed significantly. This is positively fucking timeless, and the white-ecru color combo is a summer delight. Put this on anyone, at any age, and they’ll look fantastic, as long as they’re heading to a party in the Hamptons.

This is an absolute delight. The trimmed collar is ever-so-slightly too cartoonish for my tastes, but she is definitely the girl for this dress. And let’s take a moment to appreciate her shoes:

SO. MUCH. FUN. That heel is the cutest.

Let’s just pretend we can’t see the horse’s tail she’s wearing as hair extensions, because everything else about this is fabulous. She was born to wear this fuchsia color, and the matching lipstick is the best. The accessories are a Rihanna-appropriate combination of sexy and badass, and the flower headband thing is all-around hilarious.

Possibly the best thing she’s worn all year. Hippie-chic looks SO much better on her than hipster-chic. I love the blousy tapered sleeves and the print, and her hair is refreshingly non-stupid.

An amazingly gorgeous couture gown, but someone please give this woman a haircut and a dye job. This long black hair with auburn roots thing is REALLY not working. Also, a couture evening gown at a movie premiere? It’s not unheard of, but it is a bit excessive. Save this dress for an awards show, add some diamond earrings, and hire a hair stylist, and she’d look flawless.

An incredibly chic and delightful little dress that you definitely have to be 6’2″ like Maria Sharapova to pull off. This would literally be a gown on me. Sigh. Anyway, the white strappy sandals are a great, summery addition to an already light and airy look. But the purse is not my favorite, and also, why is Porsche designing purses?

It’s fun and vaguely tennis-y, though the lines in the bodice are kind of odd. But this strawberry-red is definitely her color.

How is this woman 28 years old? Every time I look at her, I’m like, aw, look at this darling little teen. Anyway, it’s a sweet enough dress, though I’m not sure I can really get behind those shoulders. They’re a little too alien-chic for a otherwise businesslike outfit.

A truly magnificent gown… that she should have saved for autumn, and that needed to be hemmed by about two feet.

Warning: when you leave the house in a loose flannel shirt-dress, you may look like you’re in the middle of a walk of shame in Seattle. Belt that shit, tailor it, and don’t wear men’s shoes with it, and you might actually look like you own the clothes you’re wearing.

Marigold is hot right now, and so are walk-of-shamey shirt-dresses, I guess. I hate this half-open tunic, and black ankle boots in the summer make me upset, but I can’t pretend she’s not wearing the shit out of this.

Killer dress; fantastic purse; WORST SHOES EVER. They make her look like she has pointy demon feet.

This feels tacky and dated, but that’s more Versace’s fault than anyone else’s. Also, her toes have broken free from those stupid shoes and are making a run for it, so everyone beware of the stray toes that may appear on this red carpet.

Bridesmaid bullshit. And the shoes are tackier than the entire Kardashian clan combined.

Julia, darling. While your top and shorts are kind of adorable, and certainly a good effort for a red carpet newcomer, someone clearly needs to take you under their big gay wing. Because these shoes are about as wrong for this outfit as humanly possible. And I refuse to live in a world where apocalyptic black-rooted platinum perms are back in style. There is enough horror and sadness in our world today without resurrecting this hairstyle.

This is so embarrassingly terrible that I can’t even bear to look at it. Someone needs to be fired for this red-light district disaster.

Take your pick, dear readers – what’s the worst thing about this look? The wig, which was cut with a pair of leftie scissors by a right-handed drunk kindergartener? The outfit, which is a tin foil nightmare? Or the platform sneakers – that’s right, I said PLATFORM SNEAKERS. I love the Spice Girls as much as any girl who was ten years old during the height of their fame, but I categorically refuse to permit platform sneakers to return to the limelight.