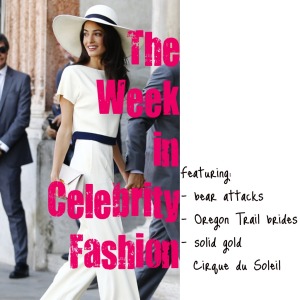 Let’s wrap up this fucking fabulous week on the red carpet, dear readers.

We must have been very, very good, dear readers, because the endless summer is upon us at last, and the world has a new Jackie O. Her name is Amal Alamuddin, and last week, she did like the 87th most awesome thing she’s ever done in her amazing life, and married George Clooney. She traipsed around Venice looking perfect, and being perfect, because she’s perfect.

I love the way her hand is resting against her chest, as if to say, “Who, me? Oh, yes, I did marry this silly little old man. But don’t worry, I’m still an internationally-renowned lawyer who has represented the fucking prime minister of Ukraine.”

I usually hate jumpsuits that fully cover shoes, but I have to make an exception for this. I mean, this outfit definitely makes me wonder if there is a disco-themed solid gold Cirque du Soleil that I don’t know about, but if anyone can pull off that particular aesthetic, it’s Rosie.

Deliciously disheveled, like she rolled out of bed, threw on the world’s most beautiful pillowcase, and left the house.

ROSIE HUNTINGTON-WHITELEY at the Chloé show
top, pants, and purse by Chloé

Are we back to tying sweaters around our waists like it’s the 90s, or is that just an uncommonly large belt?

That coat should win a Nobel Peace Prize. I don’t care where you come from – all of human existence should be able to agree that this coat is the BEST. The Hostess cupcake-decorated shoes aren’t my favorite thing on earth, but the purse is a delight.

Another day, another French actress in black, making all non-French women feel inferior about themselves just by merely existing.

The dress is adorable; the purse is nice, though a little over-large; the shoes are a little disappointing. But that headband. I NEED THAT HEADBAND IN MY LIFE.

The dress is sleek, chic, and perfectly Elizabeth – same goes for the hair. But the accessories look like they belong with a different outfit. And not in an, “oh, what a surprise!” way. Just in a “um, did you get dressed in the dark?” way.

OLIVIA PALERMO at the Chloé show
dress by Chloé

I don’t think I’ve ever really liked a single pair of shoes she’s ever worn, but this is about as streamlined and minimalist as it gets for Olivia. Only two giant bracelets, and a shocking lack of fringe? Who even are you?!

OLIVIA PALERMO at the Valentino show
coat and shorts by Christian Dior, shoes by Aquazzura

I have a problem with the obscenely large pockets and the fact that she looks pantsless, but overall, it’s not terrible. Again, anytime she’s not drenched in 80 pounds of fringed accessories, I’m pretty happy.

Yes, it’s very cool that you were able to get this dress days after it walked the runway. But next time, can you spring for something that hasn’t been through the office shredder?

What is happening to my favorite red carpet stars? Why are they all phoning it in lately? First Diane Kruger, now Cate – you are too good for this, Cate. Only Julia Roberts wears ill-fitting, awkward button-downs with couture skirts, and even she looks stupid in them.

I dig the mesh skirt, but I’m not sure this dress really needed to be one-shouldered. I think it had more than enough details already. It’s still a strong look, but I’ll never understand why Miranda’s street style is infinitely better than her red carpet style.

Unless she was attacked by a bear en route to this event, there is absolutely no excuse for this dress.

I sort of forgot she was a thing.

If you’re only going to hit one or two red carpet events a year, you better show up looking so phenomenal that I can’t stop thinking about you for weeks. Otherwise, you’re wasting my time. And I recap Dawson’s Creek, so Michelle Williams wastes too much of my time already.

LEIGH LEZARK at the Chanel show
top, pants, and shoes by Chanel

I hope to god she didn’t actually spend MONEY on any of this. I think the world economy may actually implode if someone actually exchanges currency for this bag of bullshit.

4 responses to The Week in Celebrity Fashion, Part 2