Every con has its pros. And every pro has a bedazzled pantsuit.

To the delight of all of my lesbian friends, Cate has worn nothing but suits on this press tour. Kudos, Ms. Blanchett. Also, I plan on wearing this to my second bat mitzvah when I am 83. 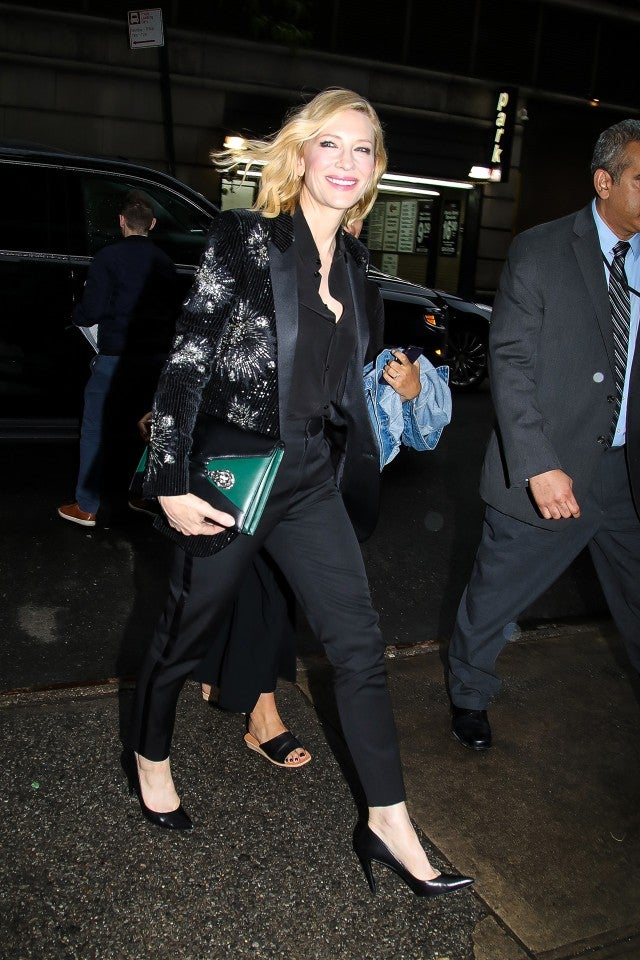 I love that tuxedo jacket so damn much.

CATE BLANCHETT at a press conference That lipstick makes her look like a ghost clown, and I don’t even care because Cate Blanchett is that powerful.

CATE BLANCHETT at The Tonight Show
suit by Armani 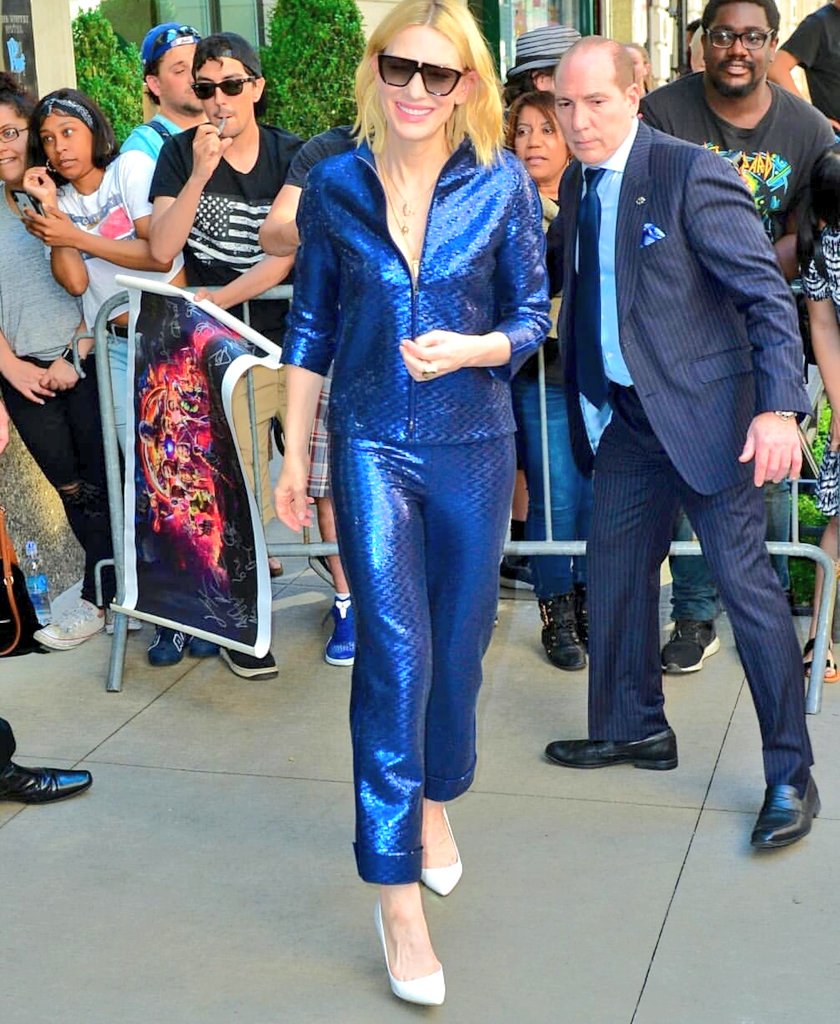 It’s like a shiny track suit. And not in the good way. Because it is impossible to mean that in a good way.

Runner-Up: SARAH PAULSON at the world premiere
gown by Prada

Day-glo Koosh ball, but make it fashion. (THAT, my friends, is a compliment.) 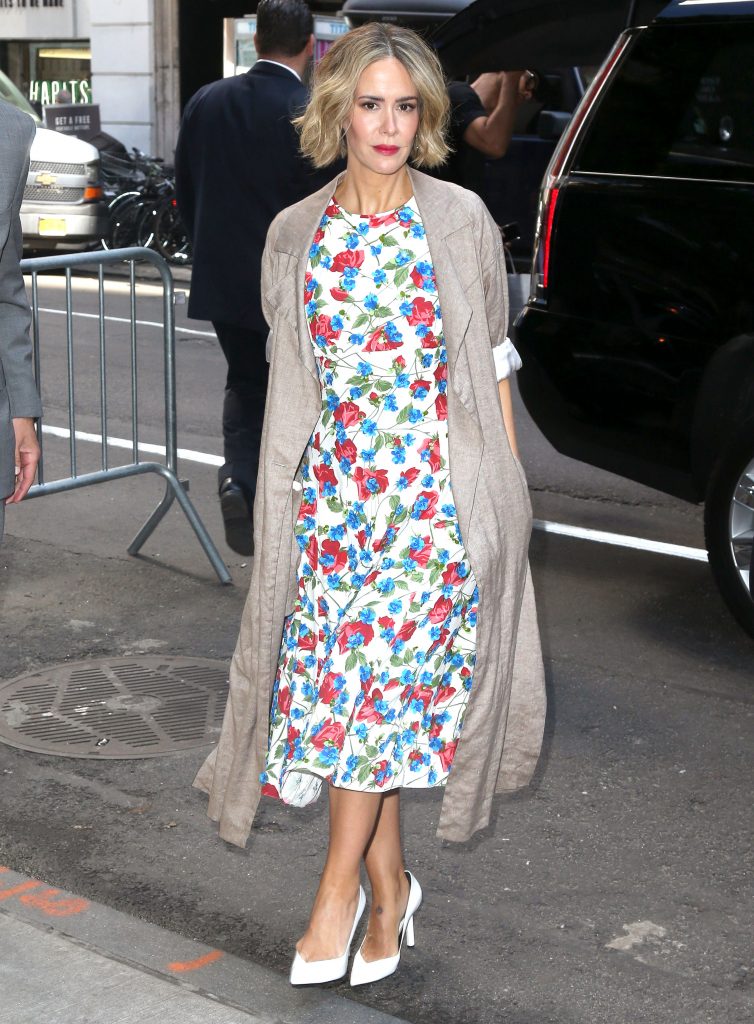 The duster’s a tad unseasonal, but the dress and shoes are summertime perfection.

I’d like those shoes in a size six immediately, if not sooner.

It’s shiny and twisty and girly and funky and above all, Riri. The purple and mauve makeup is brilliant. All the accessories are on point. I love this.

MINDY KALING at the world premiere
gown by Prabal Gurung

Glamorous as all hell.

Maybe the shoes match in a different light, but in this one, it’s a problem.

Cate’s suit is phenomenal, and her shoes are a stroke of genius. Sandra’s jumpsuit is perfect, but she could stand to lose a few hair extensions. Everyone else looks good, but not particularly remarkable.

AWKWAFINA at the world premiere
jumpsuit by Reem Acra

Aggressively romantic, in a medieval nightgown sort of way. It’s actually pants, if that helps you deal with this. (It didn’t help me.)

GIGI HADID at the world premiere
gown by Vera Wang

I’m not sure whether a handful of models hit up this premiere because they’re in the movie (it does prominently feature the Met Gala, after all) or because that’s what models do – they show up to random movie premieres and wear black. Honestly, I kind of dig the oversized draped sleeves, but I’m not sure I’m sold on the front of that skirt.

SANDRA BULLOCK at the world premiere
gown by Elie Saab

I know she didn’t actually wear this on the red carpet seven years ago, but you’d believe it, wouldn’t you? The earrings are terrific, though.

The slitted sleeves seem unnecessary, but I love the shoes. And the shoes of that guy walking next to her, for that matter.

LIU WEN at the world premiere
dress by Jason Wu

LILY ALDRIDGE at the world premiere
gown by Dolce & Gabbana

I don’t even understand what I’m looking at. I’m all for mixed textures, but this is incomprehensible.

CINDY BRUNA at the world premiere
dress by Balmain

I get what she was going for, but I really don’t like it. Love the sunglasses and the skirt. 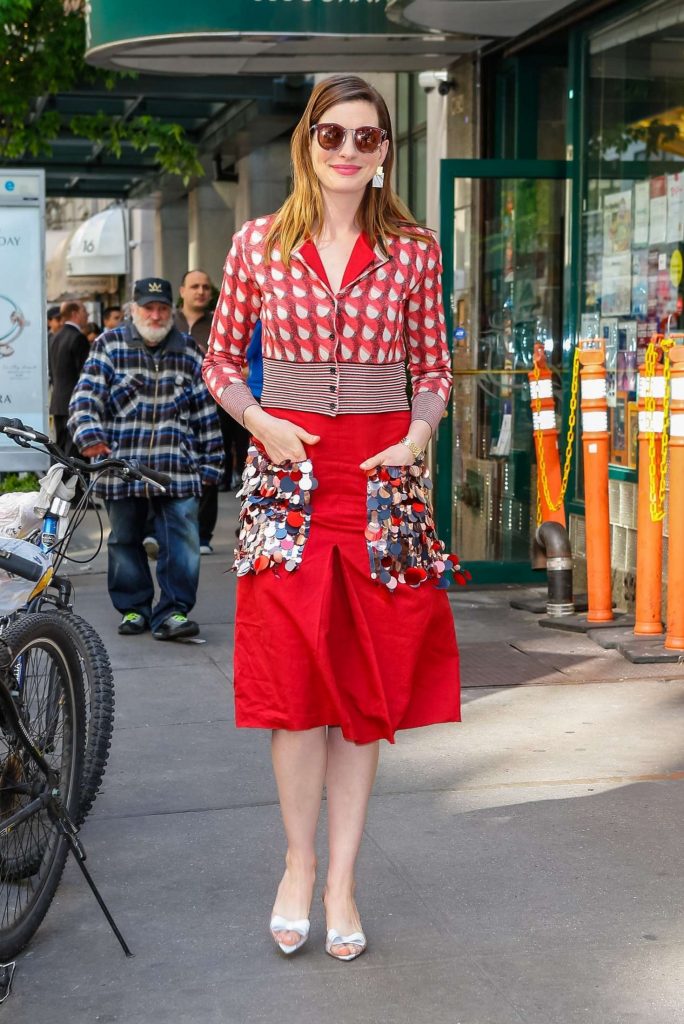 Hate the pockets and the shoes. Love the texture; not sure the silhouette really works.

I love you, Bellatrix, but you need to try harder than this.