Here’s what I loved and loathed on the runway this year.

Best of the Runway

Christian Siriano, by far the most successful winner of Project Runway to date, gave quite a show in his Spring 2010 collection. My favorite thing about Christian as a designer is that he is a showman, but unlike most fashion designers, he makes the drama all about the clothes. 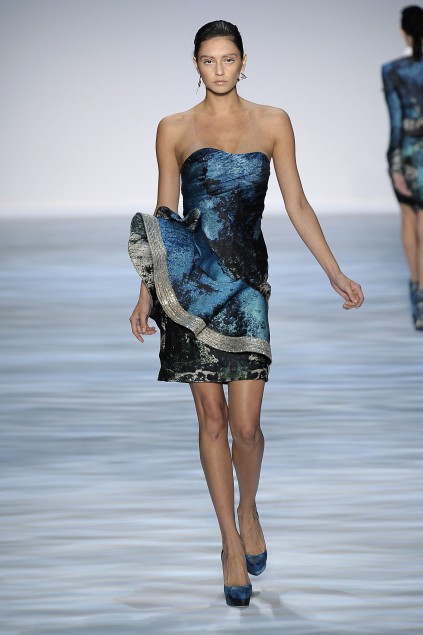 He nailed the look from head to toe: shoes that complement the look perfectly without seeming matchy-matchy, low-key hair and makeup, a perfectly fit dress that’s incredibly body-conscious, impeccable draping and a truly beautiful print.

Other designers try to shock you into paying attention to them with moth-eaten ball gowns, outfits made for rich aliens, or enough whimsy to make you gag. This isn’t to say that those kind of over-the-top designers are untalented; on the contrary, they are incredibly innovative and creative artists. But what I personally love about runway fashion is when the designers don’t just let themselves run amok. The true challenge comes when designers force themselves to create ready-to-wear looks, and don’t use smoke and mirrors to distract from their clothes. Christian nails that challenge, and that is why he is an amazing designer.

Worst of the Runway

Hands down, the Lindsay Lohan-led Emanuel Ungaro Spring 2010 line was the biggest hot mess to hit the runway this year. I actually had to choose between several different atrocious outfits from that line, as there were so many that made me question Lindsay Lohan’s judgment more than I already did.

My thoughts in a nutshell:

The collection was doomed from the start, and under serious scrutiny because of Lindsay Lohan’s relationship to it. But there’s no excuse for putting this kind of bullshit on the runway. It’s an insult to Fashion Week.

Tune in tomorrow for more best/worst of 2009.

Respond to Best/Worst of 2009: On the Catwalk