I didn’t even bother to watch the awards show. I really only care about the fashion. 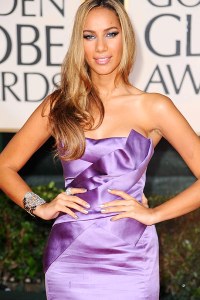 I don’t think I’ve ever seen a woman wear either of those colors after her eighth birthday. Unless, of course, she is the headliner in an 1980s drag queen prom show, or moonlighting as the Easter bunny. Kruger’s pink gown is a nightmare, from the color to the sleeves to the bow, and her dead-on-the-inside expression doesn’t do much for me. Lewis chose a particularly tacky shade of purple, made even trashier by her Jersey Shore tan and black roots. Oh, and use a fucking steamer, for crying out loud. This photo cuts out the worst of the damage, but Lewis looks like she picked this up off a hotel room floor the morning after a bad decision.

When Did She Get So Old?

Isn’t there something just plain off about both these ladies’ once-beautiful faces? Close-ups of Cameron’s face showed her looking distinctly Madonna-esque. Heather looks like she hasn’t slept in days. Both women look like there’s a very unpleasant smell right under their noses. And this photo doesn’t show it, but Heather is wearing her hair in a ponytail. On the red carpet. Cameron looks like she did something equally lazy to her hair. Get your shit together, ladies. You’re hot, rich, and thin, but you need more than just a dress to look like a star on the red carpet.

Check back later for more! You’ll see my favorite and least favorite looks of the night, plus more character assassinations!