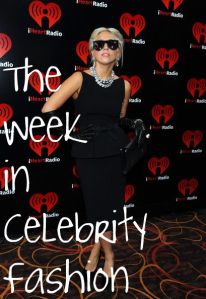 It’s been too long, dear readers! There’s fabulousness to be caught up on!

LADY GAGA at the iHeartRadio Music Festival in Las Vegas// dress by Moschino, sunglasses by Fendi, purse by Salvatore Ferragamo

YES. Hair-makeup-shades-diamonds-dress-gloves-purse-shoes-HEAVEN. OK, I exaggerate, and I’m not really that big on peplum skirts, and those shoes are downright boring. But it’s nice to know that Gaga can keep every eye in the room on her even when she’s not wearing half a freshly slaughtered cow.

There are several reasons why this is awesome: 1) It was taken at the same event as the previous Gaga photo. 2) And she kept the Fendi sunglasses on. 3) It’s a studded leather trench that looks custom-made for drag queens. 4) It’s designed by Chris March, of Project Runway fame, which basically means it really WAS custom-made for drag queens. Which also means he’s the perfect designer for Gaga, so I’m glad those two divas found each other.

BEYONCE at Macy’s in New York City// gown by Lanvin

I’m going to go ahead and write off those feathers as some sort of nesting ritual.

The dress is almost cute, but not quite. Those shoulders look just a bit stupid on her. Us ladies of teeny-tiny stature, when we done purposefully exaggerated items of clothing, tend to just look like kids playing dress-up. Also, Lea? Lay off the spray tan. Your legs are a different ethnicity than your face.

The bitch looks great, but a dress this minimalist requires more precise styling. It’s good that she veered towards chunky, eye-catching accessories, but they don’t really work well together. And she’s in desperate need of jewelry.

No, Olivia! Bad starlet! The hair is not even remotely styled, the dress fits terribly and doesn’t flatter her at all, her eyebrows look ridiculous, her lipstick is even worse, and I want to throw her shoes in a fire.

I am so not a fan of those giaaaant fucking suede colorful pumps, particularly while worn with evening gowns, but at least it’s in a nice color this time. The dress is actually really interesting and looks beautiful on Rosario. However, her mental patient hair and truly terrifying makeup are making it hard to take her seriously.

The dress is not my taste, but it’s very Versace, so I get it. The shoes are either phenomenal or absurd, possibly both. But that hair is awful. If you’re going to part and slick down your hair like that, at least retouch your roots.

Hair is still a bit of a mess, but this gown is pretty wonderful. I think the cocktail ring is really distracting; I think it’s a little casual for this gown, and some bling would have been more appropriate. The purse is awesome, but again, a little strange for such a formal gown.

I guess I should just be thankful that Lindsay is still capable of like, standing up for long enough to pose for this picture without throwing a drink or falling over or running to the ladies room for a few lines of blow. And honestly, for Lindsay, it’s not such a bad gown. I mean, lord knows I don’t love a evening gown/bikini top hybrid, but I don’t exactly set the standards high when it comes to this particular starlet. That’s just setting us all up for disappointment. But anyway, the hair is not as disgusting as usual, and the front of the dress is actually inoffensive. So, yay!

Ten thousand kinds of fierce. The dress is super-chic, very modernized mob, and the accessories are brilliant. Matching your shoes to your purse might not work on adults, but on a 14-year-old starlet, in that phenomenal yellow, it totally works.

Honey, if you can’t stand up straight in them, then don’t wear those stilettos. And would a smile kill you?

I am so not down with that khaki-green suede shoe becoming a trend. Also, this dress shows a lot more of SJP than I care to see, and I think we’re all really over white lace dresses at this point. The flower just feels like a cheap and desperate Carrie Bradshaw throwback.

The bust could fit a little better, and I am downright appalled at the lack of jewelry, but this dress is really gorgeous on her. Seriously. I always forget about Liv, but she can pull off a serious fucking gown when she wants to.

I’ll just say it: Where are Scarlett Johansson’s breasts?!?! Two years ago, they would have been busting out of that little tiny corset top. Just needed to point that out. Cute shoes.

Every part of this look, from the hair to the makeup to the dress to the shoes, screams “Look! I’m doing that old Hollywood glamour thing! Do you get it?!”

Um, who are you and what have you done with Fergie? Not that I in any way want you to return to how you’ve been dressing for the last, like, decade, but seriously. What’s this Real Housewives of Atlanta aesthetic all about?

Everything is just a little bit wrong. A structured shirtdress in a soft, flowy material doesn’t necessarily make sense, at least not when it’s executed poorly. I love a dress with pockets, but those things look absurd. Those shoes are … trying to be awesome, but not really accomplishing it. And the hair is just lazy.

You have two children and money beyond imagination. Why do you insist on wearing shoes clearly designed for prostitutes?

One response to The Week in Celebrity Fashion