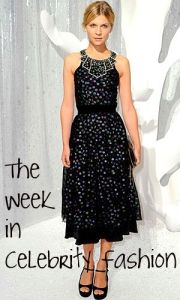 We’ve got Gaga as a giant merkin, Lea Michele making it too easy to poke fun at her, and plenty of fugness and fabness from the front rows of Paris Fashion Week.
LADY GAGA in London

Gaga at her finest. I may never rest until I find those glasses. They’re seriously all I can think about. Love the lace dress, the fur shawl, the white gloves, and those phenomenal mint-green platforms.

And then we get to Gaga at her worst, where she looks like a giant merkin.

Lea, I of all people understand where you’re coming from. I too am a woman of small stature. And though I don’t love admitting it, I too have worn shirts as dresses in public. However, I was wise enough to leave that particular fashion faux pas behind once I hit my twenties. You really need to do the same. (And yes, I looked up the outfit – ASOS calls it a top, not a dress.)

And aside from the fact that someone could perform a full gynecological exam on you without removing your clothes, the top of this dress is all kinds of fugly, those shoes were a terrible choice, and that bowl cut is not really a good look for anyone. Oh, and you know how people (read: Sarah Hyland) make fun of you for how you pose on the red carpet? That face is why.

Um, yum! A fun little twist on a black and white dress, with that kind of draped overlay. And the shoes are delish.

It’s just too immature. Unless you’re stopping at this red carpet event on your way to your best friend’s bat mitzvah, this isn’t really appropriate. The girly ruffles, the bright purple, the skinny high belt that serves no purpose (one of my biggest peeves), the lack of jewelry, and the stick-straight hair just scream adolescence.

Easy-breezy hair and eye makeup with red lips is a fun look, and I am all about this skirt. She was smart to pair a busy, colorful print with a black top and black pumps, and I like that the proportions feel a little vintage.

I like to pride myself on my blazer collection, but it doesn’t hold a candle to Rachel Bilson’s. This bitch literally owns a fierce blazer in every conceivable cut, color, print, and fabric. This particular jacket is an adorable color and works perfectly with her white lace top and skirt. I’m usually not a fan of those round-toed suede pumps, but they look way cuter with an ankle strap, and that taupe color is a lot more palatable than the greens and blues I’ve seen in similar shoes.

KIRSTEN DUNST at the New York premiere of Melancholia // gown by Chloé, shoes by Sonia Rykiel

Oof. That lumpily-draped top is just too unflattering. The shape of this gown really does nothing for her.

KIRSTEN DUNST at a Bulgari event // gown by Derek Lam, purse by Bulgari

FIERCE. And you know these slightly over-sized, loose-fitting dresses rarely look good off the runway, so it’s impressive that K.Dunst can pull it off. The purse would be ridiculous with anything else, but with such a sharp, crisp, classic white dress, a giant statement purse is totally appropriate.

Sometimes I forget that Fleur Delacour can dress like her life depends on it. She’s got that perfect French style without seeming pretentious, or worse, totally fake. This dress is really gorgeous on her, and she styled it appropriately. Her hair and makeup are always a tiny bit too underdone for me, but a fresh-faced lady on the red carpet is a refreshing sight.

There’s so-ugly-it’s-cute, and there’s REALLY FUCKING UGLY. This dress is, quite obviously, the latter. But those sunglasses are precious.

JESSICA BIEL at the Giambattista Valli Spring 2012 show in Paris

I’ll take the accessories and leave everything else. Why does she so often insist on dressing three times her age? Honey, you’re not a post-menopausal Upper East Side housewife, so stop dressing like one.

JESSICA BIEL at the Valentino Spring 2012 show in Paris

It makes me sad when someone wears a bunch of pieces that are individually stunning and look like hell in a handbasket together. Great dress, shoes, coat, and purse, but together, it’s this weird mish-mosh of robin’s egg blue and gray/nude/taupe, and the effect is just kind of blech.

ALEXA CHUNG at the Valentino Spring 2012 show in Paris // dress by Valentino, sunglasses by Charlotte Olympia

What is it about hipsters and unwashed, unbrushed hair? Like, how does mental patient hair suddenly legitimize you as interesting and indie and cool? Oh, right. It doesn’t. You just look like an asshole.

See? She could almost look normal if it weren’t for the motherfucking hair! It’s just destroying my will to live.

Snooze. Too dull. But I hope your ankle feels better soon, darling!

Is there anybody cuter on planet earth? This dress is AMAZING – it seems simultaneously tailor-made for Hailee but also universally wearable. The blue purse was basically a stroke of genius, and she just looks so happy and refreshingly normal – if normal girls went to fashion shows in Paris wearing head-to-toe Miu Miu.

LINDSAY LOHAN at the Kanye West Spring 2012 show in Paris

Apparently, Lindsay Lohan is starring in a new reality series entitled “The Real Sister-Wives of Salt Lake City,” in which desperate Mormon housewives don traditional prairie garb while foregoing long skirts and anything that resembles a bra.

I don’t think a woman this small should ever wear a suit jacket that large. She looks like she’s playing dress-up in her grandparents’ closet, and pulled out her grandpa’s favorite blazer and her grandma’s sluttiest negligee.

I’ve never had an opinion on Milla Jovovich before, but I do now: GET IT, GIRL! Seriously, she is bringing the fierce from every fucking angle. Hair and makeup could be a little better, but the gown is amazing, the accessories are delicious, and the jewelry? Every piece is just to die for.