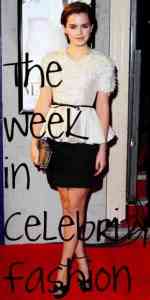 Now that your skinny jeans have stretched to accommodate your turkey belly, let’s give thanks for making fun of what celebrities wear while we sit on our couches and judge them.

EMMA WATSON at the London premiere of My Week with Marilyn // top by Jason Wu, purse by Charlotte Olympia, shoes by Jimmy Choo

A very beautiful, chic, classic look. The blouse and skirt combo is delightful, the purse is beautiful, and I like that she went simple but elegant with the shoes. I’m not a fan of skinny belts, but this one is too adorable. She’s got just a bit too much blush on, and I think she should considered changing up her hair color. But overall, a great showing from Ms. Watson.

Is “fertility goddess chic” a thing? If not, Beyonce just made it one.

KRISTEN STEWART at the London premiere of Twilight // gown by Roberto Cavalli, purse by Alexander McQueen, shoes by Jimmy Choo

Incredibly gorgeous. Definitely my favorite thing she’s worn thus far. The cut-out, the zig-zags, the slit, the black and white – I think the one sleeve is overkill, but it’s otherwise a sexy, gorgeous look.

First of all, that slicked-back half ponytail makes you look like you’re at your eight grade dance. Second, your right boob looks like it’s melting, and that concerns me. And I don’t care how perfect your body is – not every dress is made for a cut-out, darling. Also: the shoes. They make me nauseous.

The lipstick and the shoes are SO not for this dress. That lemon-lime color is sort of torture to look at, though I guess I should give her props for picking something interesting. She’s a beautiful girl, but her slouch is killing me. It makes the fabric wrinkle and look cheap, and that effect is worsened by that crazy scuba gear color.

BLAKE LIVELY at the Gossip Girl event // dress by Marchesa, shoes by Versace

She’s ten minutes away from wrapping some tissue paper around her nipples and calling it a red carpet look, isn’t she?

Just because Blake tries way too hard doesn’t mean you’re allowed to not put even a modicum of effort into your outfit, Leighton. Stripper shoes and a little fairy dress don’t cut it.

Good lord, can we PLEASE be over jumpsuits? And also, who needs such a giant fucking purse on the red carpet? Save that for street wear. All you need here is lipstick and your flask, and both of those fit in your garter anyway. And let’s not even touch the necklace and the shoes. Just hideous.

No matter how much I love this girl, I can’t pretend this isn’t FUGGGGGLY. The shoes are amazing, but literally everything else is making me cringe, from the hair, to the shape of the dress, to those ugly mixed prints, to the wacky orange purse. It’s all a mess, and I can’t defend a mess, even if it’s a mess on a very cute fourteen-year-old girl.

My biggest problem with this dress is that she wore almost an identical one, again by Stella McCartney, a mere two months ago. And she didn’t even bother to change the styling or give it really any interest at all. That’s lazy red carpet styling, dear readers, and the Democracy Diva will not stand for such shenanigans.

That hat is the stupidest thing I’ve ever seen. And the just barely mismatched skirt/gloves/shoes are aggravating my eyeballs. But the outfit itself is gorgeous, the sunglasses are fierce, and Lord Ginger behind her looks delicious in that light gray blazer.

You really just can’t apply the normal rules of fashion to a woman like this. She’s a walking piece of performance art at this point.

A snooze-worthy dress with ugly accessories? No, thanks.

Sweet dress, but it doesn’t come close to fitting her. And this black stocking/black shoe trend is cute on the street, but makes women’s feet look invisible at red carpet events.

NICOLE RICHIE in West Hollywood // dress by Halston, shoes by House of Harlow

Love the paint splattering, though I’m not totally sold on the shape. I just wish I could scrape half the jewelry off of her – she always looks so damn cluttered. Cute purse, though the shoes don’t quite match.

Nicole Kidman wore this last week, so apparently this is the go-to ugly gown for overrated, extraordinarily pretentious movie stars. Good to know, if you’re looking to bait one.

JENNIFER LOPEZ at an AMAs after-party // dress by Emilio Pucci

Hair is awful, makeup is great. Dress is beyond hideous, accessories are cute. Ruthlessly judging celebrities is tough work, dear readers, but somebody’s got to do it.

No. Grown women do not wear dresses like this. Just no.

5 responses to The Week in Celebrity Fashion, Part 1