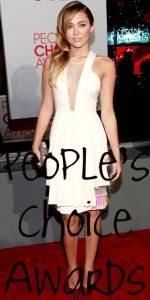 Welcome back to the PCAs!

The top spot in my posts is always a coveted position, so congratulations to Miley Cyrus for making it here! For once, Miley didn’t dress twice her age, or dress like a stripper, or dress like a homeless hippie. Instead, she brought out modern, futuristic Miley, a Miley with a keen sense of style and a daring personality. I love the cut of this dress – sexy enough for a rebellious nineteen-year-old, but the sheer panel keeps things from getting X-rated. But the plunging squared-out V-neck and the shape of the straps are terrific, as is the paneled skirt. I’m not sure I have any idea what’s happening with the technicolor reflectors on her dress, but fuck it – it’s unique and it feels fresh and forward-thinking, who gives a shit if it’s weird? The pink shoes were a fun, spirited choice, and actually look awesome with the rainbow reflecting on her skirt. She was smart to keep the purse a little more basic. Hair looks almost shockingly fake extension-free, and the makeup is, for once, subtle and natural. All in all, a huge success for Miley!

You’re a little late to the 1920s flapper train, Lea, but come aboard anyway, there’s plenty of room. She looks cute, but this is a little unreasonably formal for the PCAs. And that shade of lipstick is a problem.

If you’re going to wear a dress that is more interesting than pretty, I applaud you – but you have to make other concessions. Pick the simplest shoe possible, and keep your hair down and your makeup light to soften up the intensity of your dress. Jennifer broke my rules, so all you can notice is that the swirls on this dress seem to point directly towards her nipples, and that’s a bit distracting.

She’s boring as hell on the red carpet, so this is an achievement for her. But red and black leather dresses are everywhere right now, so expect a lot more looks just like this one. Cute shoes, though.

Sexy dress, but I’ve seen so many green Elie Saab dresses on the red carpet (Gwyneth Paltrow, Zoe Saldana, etc.) that the color has become a little less interesting to me. But it definitely works on Nina, though I don’t think nude accessories were necessarily the best choice. I like the shape and style of the shoes, but they might have been better in a darker color, and the purse doesn’t work at all.

Don’t wear Oscar unless you can WEAR Oscar, darlings. Otherwise you’ll look hesitant, awkward, and kind of like you have to pee.

Oh, come on, Chloë. If I can put the effort into always remembering the umlaut in your name, you surely can put in a little more effort than this. Nothing wrong with what you’re wearing, it’s just a little low-key for a girl as fabulous and ubiquitous as you.

Yes, we get it, Kathy. Your fake breasts are fantastic.

I am all about Kat Dennings, and I love this look from the waist down. The skirt is fierce and the pumps are perfect and make her legs look super-long and lean. However, girl’s got a big old set of tits and needs to support them in something way better than this blouse. Also, I know she defaults to red lips, but she could explore some other shades too. She’s got great lips, it’s a shame not to have some fun with her lipstick choices.

Kat’s 2 Broke Girls co-star, on the other hand? Everything is boring as can be except the purse, which is pretty adorable. But honey, if you want to stick around in this town, hiring a stylist needs to be your next move.

What angers me is that this dress was custom made for Ashley. How can a CUSTOM MADE gown be two sizes too small? Like, seriously, how is that even possible?  Ashley is tall and thin as they come, but you’d never know it from this tight shiny disaster that looks like it’s sold at American Apparel, not DKNY.

Boring and ill-fitting, but not the worst. Oh, wait –

Oh, wait. THAT TOTALLY IS THE WORST.

Bitch, how drunk were you when you agreed to wear this dress? Honey needs some detox immediately. There’s no other explanation for this.

She always looks unwashed and wrapped in spiderwebs. I don’t know how she manages to accomplish such a feat, but she does, time and time again.