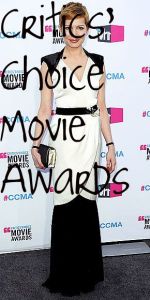 Sophisticated but sexy; glam but vintage-feeling; perfectly accessorized. I love it.

There’s no time like the present to wear a dress this stunning and this unwearable on anyone but a thirteen-year-old. It’s beautiful, she’s glowing, the colors are fantastic and she’s an ethereal little freakin’ angel. What’s not to like?

Cute dress, but there’s no excuse for that hair.

Wow. This girl really glows in yellow, doesn’t she? It’s a gorgeous dress on her, and the shoes are lovely. Hair and makeup are perfection.

I saw the short version of this in beige on Leann Rimes, but the long black gown is far better. I love the hair, I love the dress – it suits her perfectly and fits her like a glove.

Honey, that hair is not your friend. And this silhouette isn’t great for you either. Certainly, a look this plain screams for more styling. It’s just white skin and black fabric.

It’s too long, and I always prefer her with hair down, but I think this color is surprisingly great on her. Her statuesque figure really makes this dress work.

I think that’s the least attractive bust/neckline in the universe. It makes her tits look like they’re pointing in opposite – and more importantly, downward – directions. And don’t get me started on the stick-straight hair.

I want to like the gown, but something about it isn’t working. I’m not sure the colors are great on her, and I think the proportions are a little off. The pink purse is distracting, and the hair is a mess. Diane is capable of so much better than this.

Adorable dress, darling! Throw on some jewelry, lose the purse, and pick some fabber shoes, and you’re good to go.

You WORK those blue sequins, girl! This is Melissa’s year, and she deserves to glitz it up. Love the dress, purse, and hair, but she doesn’t need that much makeup.

She looks lovely, and the peplum skirt is great, but an LBD needs way more fun accessories than black pumps and a black clutch.

It’d be great in a bright or dark color, but I don’t love it in winter white. The white purse and silver shoes only make it worse.

I think her pants alone are probably taller than my whole body.

I’ve said this before, and I’ll say it again – red is her color. Her hair is chic, her purse is cute, and her bod looks awesome.

She always manages to take an expensive dress and make it look cheap. I’m not sure exactly why or how, but I know I’d like everything she wears better on something else.

Sexy dress, fab purse, but the hair could be better.

Emma, no. I know you’ve been on a different red carpet every night this week, and that we haven’t even begun the big awards yet, so you’re allowed to have an off night. But please, let your Golden Globes dress for tonight be better than this. It’s miles too long, the cut-outs are incredibly unflattering, the belt is awful, and the way it ties in front looks terrible.  Love the hair and makeup, though!