You didn’t really think the Oscars after-party coverage was over, did you?

I don’t think I could love this gown more on Jennifer if I tried. The fit is incredible – the liquid-like metallic fabric looks like it was poured onto her body – and the neckline is absolutely magnificent. The gown cinches in her tiny waist, emphasizing her perfect hips and tits. It doesn’t get much more fabulous than this.

Miley’s really started to come into her own lately, and by that I mean she’s stopped taking her fashion cues from the Vanessa Hudgenses of the world and started dressing like an actual A-lister. The simple sleekness of this gown is so refreshingly beautiful on her, and the bracelets are fun and perfect for the event. And from the back…

Damn, girl. That is one hell of a gown.

This was my Fall 2013 red carpet prediction for Kelly Rowland, but I’m obsessed with it on Nina. I wish she’d nixed the purse, since it’s only a distraction from the wondrous beauty that is this gown, but that’s my sole complaint. This is just a work of art.

ROSE BYRNE at the Vanity Fair party
gown by Lanvin, jewelry by Chanel, purse by Swarovski

I wish either the purse or the shoe were a metallic or some sort of color, just to provide a little contrast, but this is a lovely and interesting look. The slightly off-center skirt and the side cut-outs work nicely together, and the jewelry is delectable. 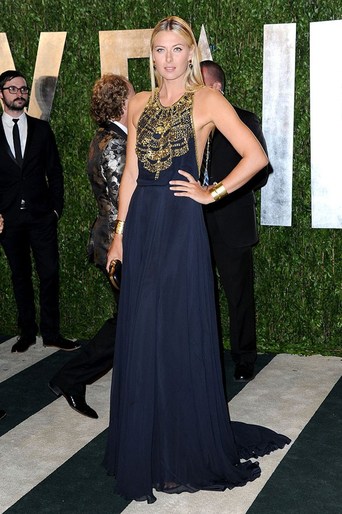 Work it, Maria! She’s only on the red carpet once in awhile, but she’s always in something refreshingly unique and ridiculously flattering. I think the silhouette of this gown is simply perfect for her, as are the colors.

It’s a stunning gown, though it might be just a little too much dress for little Miss Roberts.

Dramatic, fun, funky, and unusual. And the color is awesome.

This wasn’t my favorite of the three looks Fan Bingbing donned on Oscar night, but girlfriend knows how to make a statement. The earrings are to die for.

You can always count on Liz to bring some desperately needed color to the red carpet. I’ve got some issues with the hair and makeup, but this gown is so beautiful and interesting, I don’t know how anyone was able to look at anything but Ms. Banks at this event.

Honey, you CANNOT pull off that super-severe hair and makeup. Like, not even a little bit.

MARISA TOMEI at the Vanity Fair party
jumpsuit by Valentino, earrings by Dior

It’s not amazing, as far as jumpsuits go – I like the pockets, but the width of the pant leg is problematic. And I’d like it a thousand times better in a color.

JULIE BOWEN at the Vanity Fair party
gown by Max Azria, jewelry by Jacob and Co., purse by Judith Leiber

Overdesigned. I don’t know what the hell is tacked on to her tummy, but it looks like a peplum that got caught in the door of the limo and semi-unraveled.

ALLISON WILLIAMS at the Vanity Fair party
gown by Valentino

AMANDA SEYFRIED at the Vanity Fair party
gown by Givenchy

The collar is awful, as are the absolutely stupid amount of straps happening at the top of this dress. I don’t know who thought this was a good idea, but they were mistaken.

Could this woman just once wear something that isn’t eleven sizes too large for her? We get it, Nicole. You’re so impossibly tiny that human-sized clothes can’t come close to fitting you. And that’s simply precious, but you are way too fucking rich to not own a single piece of clothing that actually fits your body. Get it together.

This was my Fall 2012 couture red carpet prediction for Miley Cyrus, but I can’t say I like what it’s doing to Olivia. First of all, that is an alarming amount of sideboob. That alone would be more than enough skin, but with the side cut-outs, the backlessness, and the astronomically high slit – that’s just a bit over the top, wouldn’t you say? I still think I’d be able to like this look, though, if it weren’t for those shoes. They have nothing to do with this look whatsoever, and that bulky platform looks terrible with this gown.

This makes me sad, Hailee. Go fire the yes-man who told you that you look simply fabulous in this hideous-looking thing.

Costumey to the point of absurdity. Unless you are actually playing a Greek goddess who hits up Oscar parties, there’s just no reason for this dress, particularly with that hair thing, which is just laughably silly.

For the love of God, lock it UP, Klum. There is nothing appealing about this look, from the hideous unwashed hair to the boob-squashing, sternum-accentuating bodice. But if you can believe it, the back is actually worse:

Illusion netting used properly can be a girl’s best friend. This, on the other hand, is every woman’s nightmare.

Need more Oscar party coverage? Get caught up on Part 1!