The polls have closed on this post, but check back daily for new brackets! 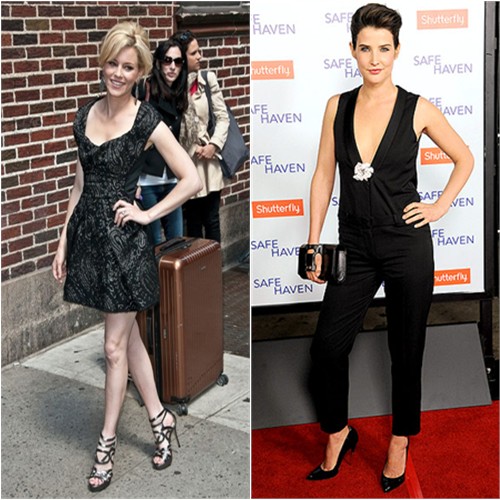 Elizabeth: Hello, March Fabbers! Effie Trinket is here, so let the 3rd Annual March Fabness battle begin, and may the odds be ever in your favor!

Cobie: Robin Scherbatsky prefers to keep things a little more NYC-chic, but I’m sure someone appreciates your over-the-top Capitol fashions.

Elizabeth: Right! Over-the-top fashions are why I’m awesome and going to defeat you easily. Oh, and you’re boring.

Cobie: I prefer understated, actually. And you can drop the attitude, Sparkles.

Cobie: Yes, but have you seen yourself? You’re glimmering more than a stripper’s body glitter, for God’s sake.

Elizabeth: Why, thank you! One of Effie Trinket’s Laws of Fashion is to never leave the house unless at least 83% of your body is covered in something shiny.

Cobie: Oh, so THAT’S why you always dress like a drag queen! That makes much more sense now.

Elizabeth: I’ve had enough of your sass, Canada. I dare you to out-dress me in orange formalwear.

Karolina: I’d greet you hello, Julianne, but it takes 100% of my focus to look this fierce and smize this hard while holding my tuxedo jacket with an iron grip.

Julianne: That actually does look like a lot of work. Why not let your hair down and gaze dazedly out into the ether, like me? 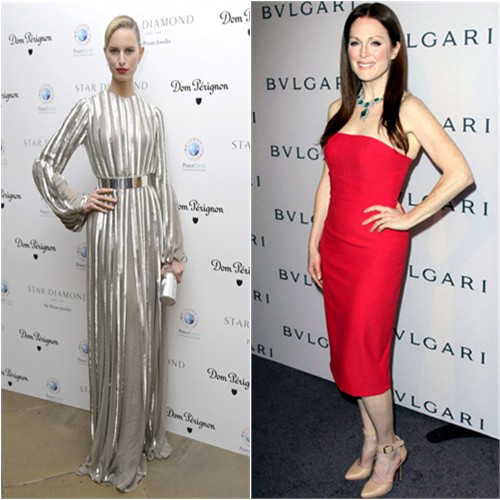 Karolina: No! I am a model! I am contractually obligated to smize at ALL TIMES!

Julianne: Fine, fine. I’m just saying, you can be fabulous and laid-back, like moi!

Karolina’s gown by Vionnet; Julianne’s dress and shoes by Lanvin, purse by Bulgari

Karolina: Fine, darling, I’ll try it your way. Look, I’m actually smiling, and my gown is flowy and breathable!

Julianne: Ha! I’ve tricked you into smiling so that I can steal your serious model-face! You really are as dumb as you look, you know. 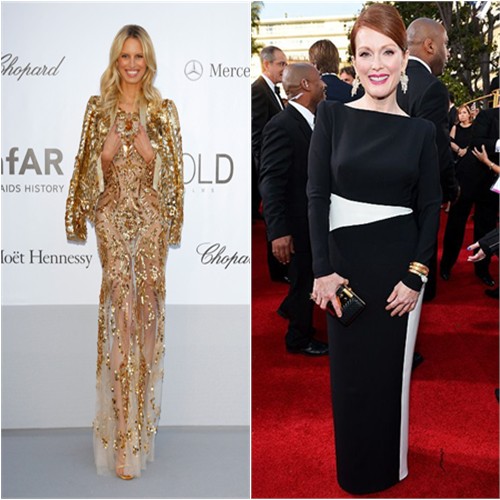 Karolina: How dare you! Who the hell are you to give me such an attitude, Miss Thing?

Julianne: I was totally joking, but since I’ve clearly hit on a sensitive issue, I suppose I’ll apologize. But only because I like your dress and it would sound really insincere if I was making fun of you while I said that. 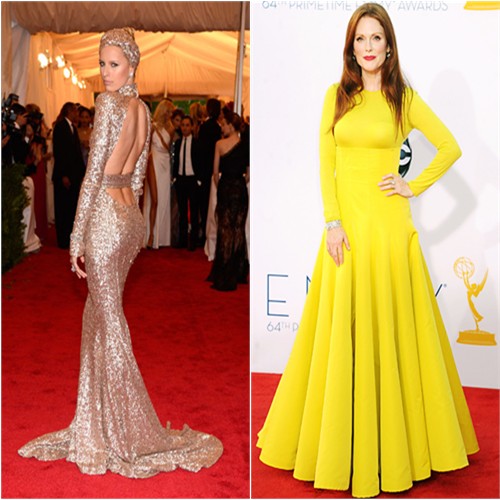 Karolina: Of course you like my dress, darling. I’m a model. My JOB is to make you like whatever I’m wearing.

Julianne: Yes, but I do that for free. And by “for free,” I mean for the total cost of this gown and all its accessories, which probably totals in the tens of thousands of dollars. But I digress.

Andrew: So this is March Fabness, hm? I sure hope me and Emma Stone don’t get matched up against each other, or that will make for some awkward dates!

Chloë: Seriously? I actually thought you two were just faking it for the cameras. Is that still a thing?

Andrew: But what’s the point in wearing all this plaid if I can’t redefine hipster cuteness?

Chloë: I don’t know, I just know I’d like you a lot more if you stopped using the word “hipster” to describe yourself.

Chloë: I would never DREAM of asking you to give up plaid. I know better than to think you’d even be capable of such a thing.

Andrew: You’re not so bad, you know. You clearly have a strong appreciation for color, because you and I are rocking the same shade of cranberry. Do you want to be shopping buddies?

Chloë: Totally! I mean, you’re like kind of old, but you look like an overgrown child, and I’m fabulous beyond my years, so maybe we should be shopping buddies! 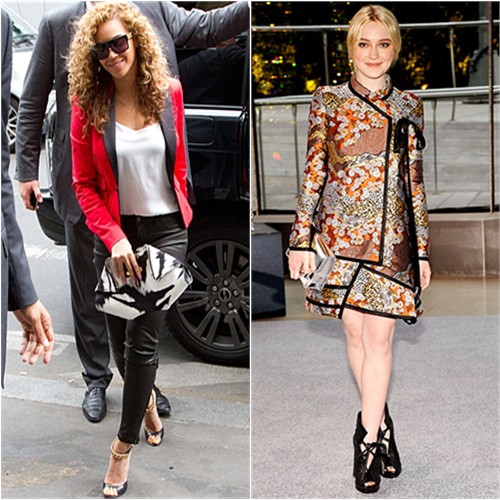 Beyonce: Hi, Dakota! Are you ready for a fun and fabulous competition?

Dakota: Why, of course I am! And can I just say, Beyonce, I didn’t expect you to be so nice and polite!

Beyonce: Dakota, I am literally a superhero. I’m technically no longer mortal, since I use unicorn blood as conditioner. Why on earth would I waste all this fabulousness on being mean to people? 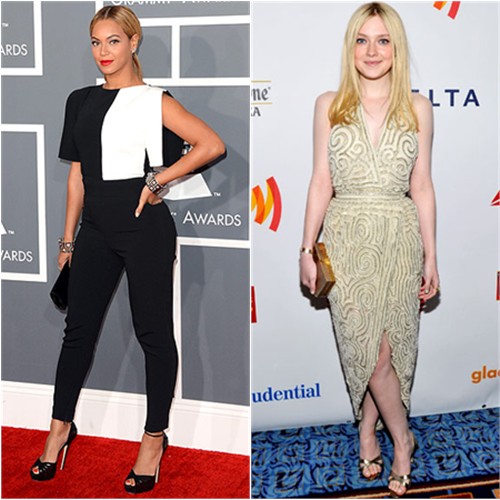 Beyonce: You’ve got a lot to learn about celebrity cure-alls, little girl. If you’re not stockpiling unicorn blood for hair shininess and phoenix claws for general luminescence, you’re doing it wrong.

Dakota: Wow. That sounds disgusting – and I was in Twilight. So I know a little something about disgusting.

Beyonce: Fair point, Dakota. And might I congratulate you on your ability to shimmer and sparkle like a diva? I mean, you’re no me, but you’re getting there.

Dakota: Yes. And this look was brought to you 100% unicorn blood and phoenix claw-free.

Beyonce: Well, if you’re going to get sassy about it, allow me to pull out the big Givenchy guns and destroy you in the blink of an eye.

Dakota: I’ve got Gucci on my side, Bey. Bring it on.