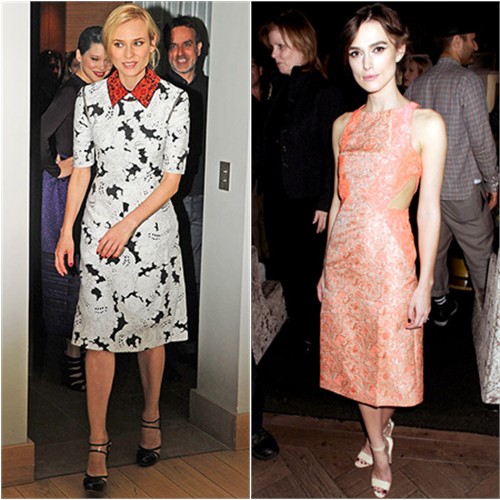 Diane’s dress by Derek Lam, shoes by Versus; Keira’s dress by Richard Nicoli

Diane: Only sixteen of us are left, Keira. It’s getting serious here at March Fabness Headquarters – don’t you want to change into your real outfit before the battle starts?

Keira: Um, this is my real outfit. And what is that supposed to mean? 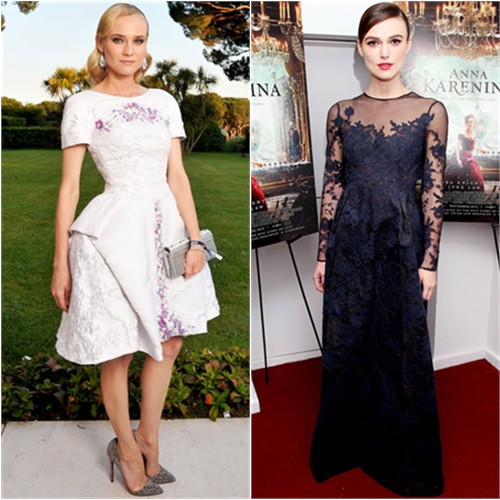 Diane: Well, it’s supposed to mean that you dress like you’re on the Oregon Trail about 40% of the time, and the rest of the time, you’re stuck in some hipster aesthetic that I can’t quite understand. 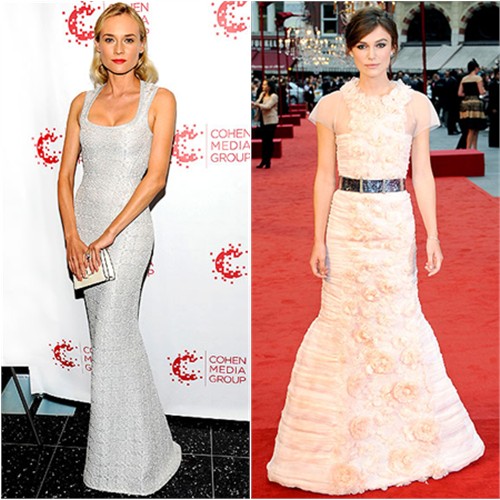 Diane: And sometimes I just pity the women who don’t understand that less is more. Of course, when you look like me, there’s almost never a reason to distract from your natural beauty with too much dress.

Keira: You are beyond obsessed with yourself, Diane. This is disappointing – I would have thought Pacey Witter would end up with a woman of substance, not some narcissistic model.

Diane: But just LOOK at me, glistening and glittering in this liquid-like metallic gown. It’s not narcissism to state the obvious fact that I am a goddess amongst mere mortals.

Keira: I have a rule about not getting into physical fights when I’m wearing Elie Saab, but I will gladly break that rule just to punch you in the face right now. 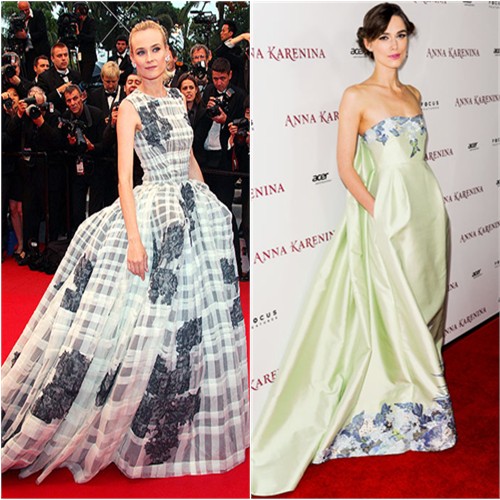 Diane: You have no idea the kind and amount of weapons I’m hiding under this gigantic skirt, Keira. I’d think twice before throwing a punch if I were you.

Keira: What do you think I’ve got in these pockets, tissues and lipstick? This battle is ON, Diane. Let’s do this. 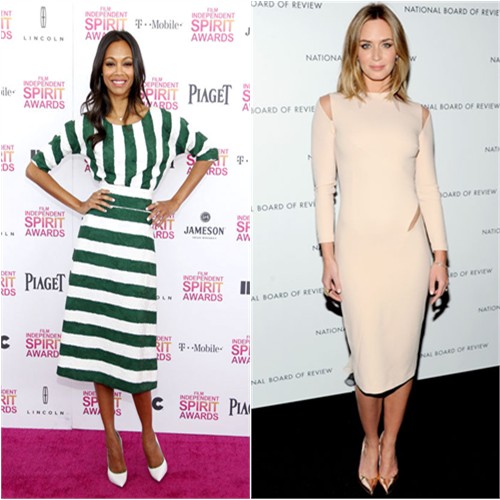 Zoe: Another day, another battle. It’s a good thing this Dolce dress is so effortless and breezy, because I’ll need freedom and mobility to kick your ass, Emily.

Emily: Well, I’m in skintight cut-outs, so I will just stand very, very still and glare at you angrily until you cower and surrender. 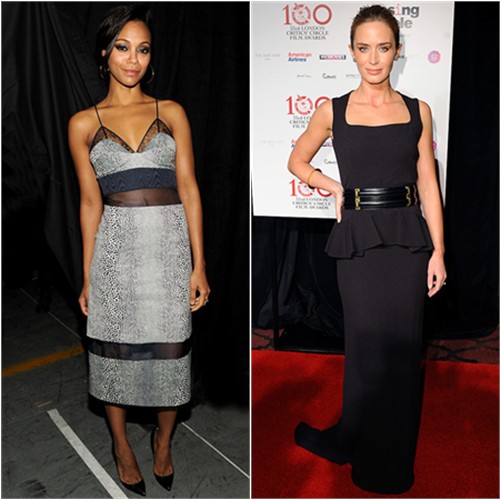 Zoe: But I don’t think you understand what’s at stake here. You’re cute and all, but I am a true fashionista. I mix prints like a fucking champion.

Emily: I don’t think we can call this a real fight until we both show up in pink gowns, do you?

Zoe: You’re right. Your Barbie pink Calvin Klein gown is lovely, but my coral Gucci is kicking its ass.

Emily: No, darling. Just look at my ass in this dress. It’s absolutely flawless. 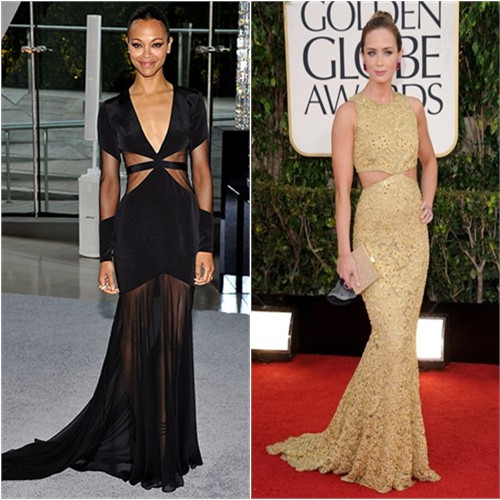 Zoe: Don’t test me, Emily. You’re not the only lady who can rock a gown with cut-outs, and I’m here to show you how the pros do it.

Emily: Oh, please. Take your illusion netting and shove it up your ass, Zoe. 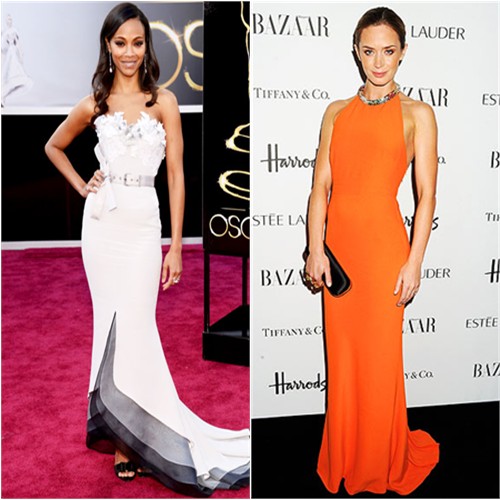 Zoe: No, because that sounds very uncomfortable. Now quick, run – I think I see Meryl Streep coming for you, and she looks pissed!

Emily: WAIT, WHAT?!?! Oh. You’re kidding. NOT a funny joke, Zoe. I still have post-traumatic stress disorder from filming The Devil Wears Prada.

Elizabeth: You’ve done very well so far, Andrew. I know it’s not easy being a man in a woman’s world, but you’ve held your own throughout this battle, so I’m sorry to see you go. 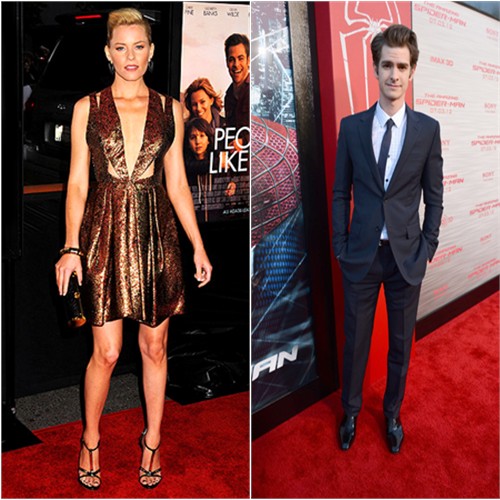 Elizabeth: Well, you don’t actually think your hip little plaid suits can compete with the rainbow of looks I wore on Effie Trinket’s Hunger Games press tour, do you?

Andrew: Well, I had the Spider-Man press tour this year too, so I think I’ve got more fabulous looks under my belt than you might be aware of.

Elizabeth: Aw, aren’t you precious.  No amount of skinny pants and skinny ties can defeat the metric ton of sparkles and glitter I cover myself in at every single public appearance I make.

Andrew: But – but – I’m fabulous too! Look at my little sweater! Everyone just swoons when I hit the red carpet!

Elizabeth: Yes, I’m sure the little girls who don’t notice the fact that you look like an overgrown schoolboy just think you’re the handsomest, best-dressed man on earth, but that doesn’t change the fact that I am going to defeat you.

Andrew: Hm? Sorry, I stopped listening. I caught a glimpse of my reflection and it looks so good in this Gucci plaid that I forgot what we were talking about. 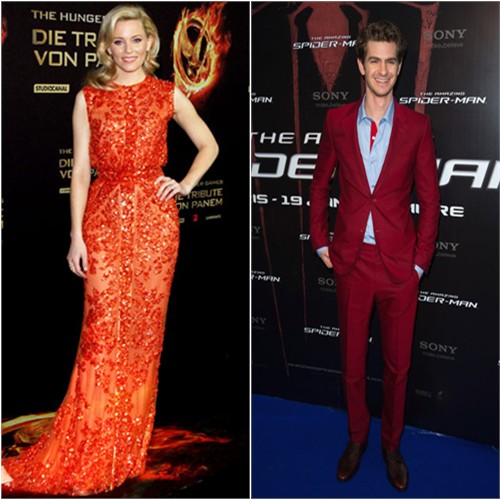 Elizabeth: Go back to the playground, little boy. In the unlikely event that I lose this competition, it’s not going to be to you.

Andrew: I doubt that, Elizabeth. There is nothing this cranberry Balenciaga suit can’t do.

Lucy: Hi, Jennifer! I know we’re fierce enemies entrenched in a fashion war, but before things get all bloody and violent, can I just say how much I totally adore your shoes?

Jennifer: Thanks, Lucy! I don’t really fancy myself a fashionista per se, but you’d be shocked how many designers want to send you free and adorable shit once you’ve been named a victor in the Hunger Games.

Lucy: Oh, I feel you, J.Law. Since I’m basically ageless, I get tossed the best shit that no other stars could dream of pulling off. Case in point: My cape dress, paired with leather boots and matching gloves? Come on. Any other bitch would look out of her mind in this, and I look amazing.

Jennifer: I do not disagree. You think I’d be wearing this sideboob-baring shit if I didn’t have a team full of people screaming at me to do ten more crunches and rewarding my efforts with Lanvin? Normal women just don’t have the same opportunities we do, and we have to remember how lucky and privileged we are.

Lucy: Absolutely. I mean, do you think my skin glowed like this before I was famous? It takes tens of thousands of dollars worth of facials and Chanel eye cream to make anyone look this beautiful.

Lucy: Even this braid took twelve hours and four assistants to make happen.

Jennifer: Well, that was an immense waste of time an effort, since that braid is atrocious. 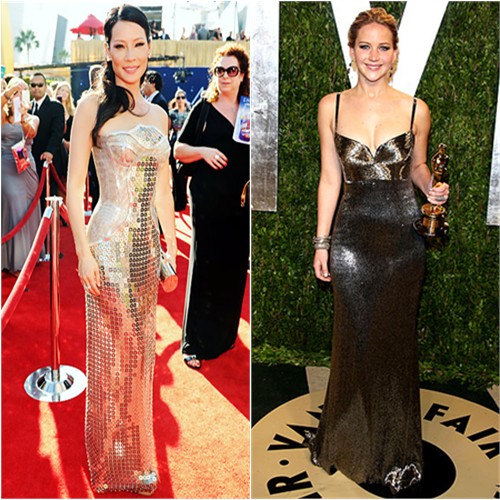 Lucy: We were getting along so well, and then you had to go and sass my braid? How dare you!

Jennifer: Look, honey, Katniss Everdeen knows a thing or two about braided hairstyles. That shit was just a straight-up mess.