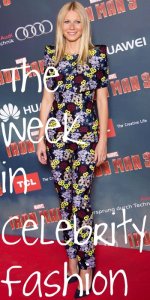 GWYNETH PALTROW in Paris
top and pants by Erdem, shoes by Jimmy Choo

I’ll admit it, I never anticipated the day that Gwyneth Paltrow would snag the coveted top spot of my weekly fashion recaps, but here she is, in all her floral glory. Though I’m more than exhausted with her decade-old center-parted stick-straight hairdo, I have no complains about this fabulous Erdem look. The accentuated shoulders, the length of the sleeve, and the fit are all perfect. And the simple navy pumps were a stroke of genius.

A perfect colorblocked dress that belongs in all of our closets. It’s just adorable.

Well, three great looks from Gwyn would have been a lot to ask in a year, let alone a week, so we can’t be surprised that this is a bit of a disappointment. It’s not terrible, it’s just sort of awkward and vaguely matronly. But the shoes are adorable.

She could have had a little more fun with her shoe choice, but otherwise, this is absolutely divine. The Dita is back.

I loved this Peter Pilotto top on Cate Blanchett last year, and I love it on Selena now. This look shows basically no skin and is still totally sexy (leather pants tend to help), but I would have loved to see a shoe with a little more personality than those plain black pumps.

SELENA GOMEZ at The Ellen DeGeneres Show
dress by Etro, shoes by Casadei

What’s worse – this patchwork Project Runway reject of a dress or that truly awful smeared-on makeup? Oh, and a general note: if you wear white pumps that are too big on you, there is virtually no way to avoid looking like you’re playing dress-up in your grandmother’s closet.

Hate the shoes, but I can’t help but love everything else. It’s Katy at Coachella – if she weren’t wearing something like this, wouldn’t we all be kind of disappointed?

The purse is too big and the belt doesn’t work at all with the side cut-outs, but it’s an enjoyable, less acid-trippy side of Katy’s style.

Your skirt is silly, and your earrings make it look as if your head is exploding.

SIENNA MILLER at the Tribeca Film Festival
dress by Topshop, purse by Delvaux

MARION COTILLARD in Paris
jacket by Chloé, top and pants by Christian Dior

Are your pants – dare I say it – TUCKED INTO YOUR PEEP-TOE BOOTIES? Because that might be the worst thing to happen to fashion since the birth of the Kardashians.

I like the dress itself, but I don’t think the proportions of it work well on her at all, and the shoes are about as expected as can be.

That coat is a thousand sizes too big on her, and the cross-body bag is one too many matchy-matchy items, but I do like all the separate pieces of this look. I just don’t love them all together.

Rashida, you are CRAZY BEAUTIFUL. Can you fucking stop it with the ombre hair and terrible lipstick already? Also, the length of that dress is totally awkward.

Slicked-back hair is not your friend, Kate Mara. And the dress is okay, but why are you wearing a bracelet on top of your sleeve? Also, your nails look like fungus and your shoes just don’t go with this outfit at all.

Did all the stylists with an eye for proportions take the week off? What is going on with these starlets lately? I can’t imagine a more unflattering pair of pants than this one, and that makeup seems designed to make Amanda look as unattractive as possible. And, you know, that’s kind of the opposite of what makeup is supposed to do.

I don’t actually like any of these pieces, and once again, we’ve got a proportion nightmare happening.

You’ve got to be fucking kidding me. I mean, someone told her there would be cameras at this event, right?

So aggressively hideous, I don’t even know how she’s able to keep even that fake grimace of a smile on her face.

Congratulations, Olivia – I am 100% sure that I have never seen, and will never again see, an uglier pair of shoes in my entire life. Those are not only an affront to fashion – they are an assault on the eyeballs so severe, it should be criminalized.

Respond to The Week in Celebrity Fashion, Part 2