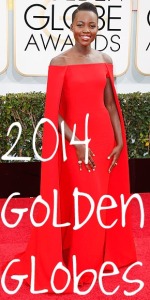 Get ready for an unreasonably long walk to the stage, because it’s time to hit the Golden Globes!

ALL HAIL QUEEN LUPITA. I pretty much wet myself when Ms. Nyong’o hit the red carpet in this jaw-dropping gown (my Spring 2014 prediction for Zhang Ziyi). Everything from the Grace Jones-esque side-parted hair to the stunning diamonds on her fingers was flawless, in the truest, most Beyoncé definition of the word. Lupita had a glow about her that was impossible to look away from – she might not have taken home a trophy, but she was the clear winner of the night.

A perfect gown for a winter red carpet event. (Julianna cannot wear black with gold branches during the summertime, like some commoner.) The earrings were a truly phenomenal styling choice, bringing a little more drama to the classic silhouette.

I’ve loved this gown since the moment Karlie Kloss hit the runway in it, and I predicted we’d see it on Lea Michele. But Michelle Dockery has been a fashion force to be reckoned with this year, and I loved seeing her go full-on princess in this stunning gown. It’s the rare mullet skirt done right – that hemline hitting at the mid-to-lower calf is supremely hot right now – and her fabulous bob has never looked better.

Sorry, Mellie from Scandal, but House of Cards’s Claire Underwood is the best Lady Macbeth on television. Robin Wright looked positively regal in this shimmering column gown, but the neckline and seaming in the bodice are my favorite details. Almost obscenely glam.

I think I might love Khaleesi’s gown more than she loves her baby dragons. And that is saying something. This print is amazing, and she even makes the very tired peplum trend look marginally fresh and interesting. I don’t love how distracting the giant cuff bracelets are, but everything else is some of Emilia Clarke’s best red carpet work yet.

I’m so glad that American Hustle brought a new best friend into Amy Adams’s life – double-sided tape! It’s a union that’s working shockingly well so far, as Amy continues to keep us on the edges of our seats with whether or not she’s about to slip a nip. Anyway, the styling of this was a little underwhelming, and I would have loved a slightly more interesting skirt, but the red/burgundy combination is pretty on trend right now.

Fun fact: Leonardo DiCaprio almost drowned in a vat of self-tanner on the way to this event.

GO AND GET IT, GIRL. Best she’s ever looked, hands down.

Helen Mirren: continuing to look better as she approaches seventy fucking years old than any of us will ever look in our LIVES. I don’t think anyone else in Hollywood could make this much green happen, but Helen can.

Love the neckline. Hate the turquoise jewelry. I just think it’s been done so many times before. If you’re going to do it for a major red carpet event, it better be something new and interesting and not just loud and distracting.

Look at this adorable bitch. Ugh, I love Aaron Paul. He instagrammed a picture of him holding an adorably fat baby the other day, and my ovaries nearly exploded.

Lady Edith’s getting all modern on us! I absolutely hate the horizontal seam in the bodice – I can’t seem to look anywhere else – but this has a mod, architectural vibe to it that I enjoy. The styling is a little bit all over the place, though – a little art deco, a little old Hollywood, but a little too disjointed.

Listen, dear readers, I’m a Jewish girl from New Jersey. I fully subscribe to the maxim, “The higher the hair, the closer to God.” But even I draw the line at this.

I don’t think the beachy California girl hairstyle works particularly well with this vampire bride gown. All I know for sure is that I want to rip that giant tassel right off her necklace. It’s practically a crime against humanity.

Weirdly stuffy and depressing, no? I just couldn’t get excited about this one.

Piper’s been in prison too long to tell the difference between a nightie and a red carpet gown, poor thing.

Oh, good lord. Did a middle school Valentine’s Day throw up all over Julie Bowen?

At a different event, I’d say Rashida Jones might be hipster-chic enough to pull this off, but these stupid fucking palm trees seem insanely casual for a black tie affair. It’s the combination of the soft white fabric of the dress and the wrap skirt – it makes her look like she’s wearing a sarong.

Aw, Mila Kunis is just the saddest little Christmas present in the world.

No. I totally get what you were going for, and I even respect the effort at some drama, but NO. Absolutely not.

There’s so much more to come in Parts 2 and 3 of the Golden Globes, dear readers. Until then, leave all your most judgmental feelings in the comments!