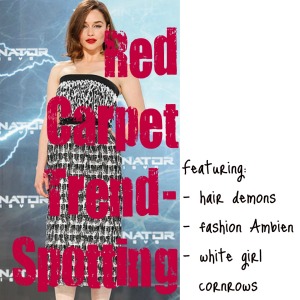 This week, bitches got shit DONE in black and white.

Yaaaaaas, Khaleesi! I had no idea she was such a fan of the House of Black and White, but her wardrobe proves she’s their most fashionable acolyte.

Emmy Rossum is cute as a puppy-shaped button. Also, I’ve never been entirely convinced that she and Lily Collins (below) aren’t the same person.

LILY COLLINS at the London premiere of Bend it Like Beckham: The Musical
dress by Maje

Right? I mean, that’s just Emmy Rossum with a slightly more on-fleek brow. All these baby Audrey Hepburn wannabees look the same to me. But I will say, the black-on-black stripes are gorgeous and very on-trend. And by that I mean, I recently purchased a set of three-dollar nail decals with black-on-black stripes, so OBVIOUSLY that makes them a trend.

KIERNAN SHIPKA at the Coach party in New York
dress, bandana, purse, and shoes by Coach

I will never be able to love flatforms, but I do appreciate the fact that as someone who was born in the 80s, I am old as fuck compared to Young Hollywood. And those tween-to-teen stars ADORE their fucking flatforms. So I won’t hold these against Kiernan Shipka, partly because I love everything else that’s happening here, but mostly because Sally Draper can do no wrong.

Perfectly chic street style befitting the It-iest of current It Girls. Also, i want those shoes.

It’s not life-changing, but the military-inspired blazer is a lot of fun.

The outfit ages her by about a decade, but it’s got an effortless chicness that I’m enjoying.

ROSAMUND PIKE at the Shanghai Film Festival
dress by Erdem

Cool dress, but that asymmetrical haircut better be for a role. Unless you’re 19 and artsy, you really can’t pull off a hairstyle like this one.

ROSAMUND PIKE at the Shanghai Film Festival
dress by Givenchy

The dress is fussy and the hair has gone from a slight distraction to something I just cannot overlook. YOU LOOK LIKE A CHILD WHO CUT HER OWN HAIR. STOP IT.

I hate the shoes with a fiery passion, but I love watching Hailee take some more grown-up risks with her wardrobe. She’s 18 now, but I’ve been following her fashion since she was a little wisp of a 14-year-old, and watching her red carpet game mature over the years has been a joy. She’s not perfect, but she always looks like she’s having fun with herself, and that’s more important to me than anything else.

The outfit isn’t exactly mind-blowing, but I could just stare at the awesomeness that is Brienne of Tarth all day, every day.

White girl cornrows were a CHOICE, and probably not a good one.

MILA KUNIS at the Faberge party in London
dress by Roland Mouret, jewelry by Gemfields

MILA KUNIS at a Gemfields event in London
dress by Antonio Berardi, jewelry by Gemfields, shoes by Jimmy Choo

It was mighty enterprising of Mila to repurpose a chef’s jacket into something kind of resembling a dress. But I can’t say I see a need for this. Are celebrity chefs so busy that they now need to go straight from the kitchen to the red carpet without so much as a wardrobe change?

Bulbous and weird, but I love the shoes.

This is the fashion equivalent of Ambien.

SUKI WATERHOUSE at the Coach party in New York
dress, belt, purse, and shoes by Coach

Oh, sweetie. I know you think this is just the height of fashion, but you look like a little girl who got lost in her parents’ closet. Try for some accessories that don’t fight with each other, and I might be able to take you seriously.

I could go on for hours about how we need to let the cut-out trend die at least a little bit, but OH MY GOD WHAT IS HAPPENING ON TOP OF HER HEAD AND IS SHE OKAY OR IS A HAIR DEMON ABOUT TO MURDER HER.