A quick break from the Spring 2011 collections to pop in on our favorite celebs and see who wore what this week. 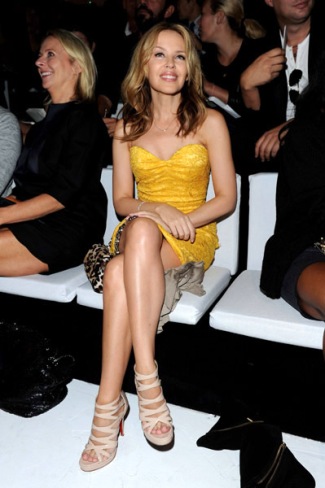 Kylie Minogue at the Dolce & Gabbana Spring 2011 show in Milan

You don’t even need to see the full dress to know how fucking good Ms. Minogue looks. The color and texture of that dress are astounding. The Louboutin shoes are killer, her legs look beautiful, and she’s basically glowing. Women half her age could only pray to look so good.

Cat Deeley at the Burberry Prorsum Spring 2011 show in London

Taylor Swift at the Roberto Cavalli Spring 2011 show in Milan

My jaw dropped when I saw this photo. I could never imagine that T-Swift could look so fashionable. Don’t get me wrong, she always looks cute enough, but she’s all about the boring, red carpet-friendly white Grecian gowns, flashy red frocks, and glittery cocktail dresses. She usually dresses the way you’d expect a country-pop tween star to dress. But this is so many things I’ve never seen Taylor be before: urban, fashion-forward, and mature. The blouse and skirt as individual items are only okay, but paired together with that styling, they look totally hip. The textured stockings are beyond gorgeous, and I’d skin a puppy for those boots. The eyeliner is encroaching on Taylor Momsen territory, but the hair is gorgeous. Swifty, your new stylist deserves a bonus!

Rachel Bilson at the Roberto Cavalli Spring 2011 show in Milan

Well, there you go. From head to toe, that’s exactly what I’d like to wear for the rest of my life.

Lea Michele in Jose Duran at the PETA Gala

Well, you can’t win them all. Those triangle boob-toppers are downright awful, as is the puckering on every single seam on this dress. The hem is a disaster, and the stiff fabric looks like it sort of just collapsed on the floor. The cut is unflattering, the dress itself is boring, and LEA! HAVE YOU LEARNED NOTHING FROM READING MY BLOG? Don’t you know by now NOT TO WEAR DARK TOE NAIL POLISH ON THE RED CARPET?!

Christina Aguilera in Versace at the LACMA Awards

Odette Yustman in J. Mendel at the You Again premiere

This biddie is starring in You Again, which in spite of having Betty White, Kristin Chenoweth and Cloris Leachman in it looks like it may be the worst move of all time. But HELLO, GORGEOUS! Even though it’s basically a carbon copy of the Jason Wu gown Diane Kruger wore to the SAG Awards, it’s still a refreshing look, particularly for a Hollywood noob.

Worst Dressed of the Week

I have so many questions. Are the pants dirty, or are they supposed to have smudges of white dust all over them? Who wears above-the-ankle strappy shoes with pants that almost reach them? Why are there so many buckles on those pants? What purpose could that possibly serve? Is she wearing a blazer with no shirt underneath? What unfortunate color are her toenails painted? Why do her feet look misshapen, pink, and angry? And why does she seem to have aged fifteen years in the last six months?