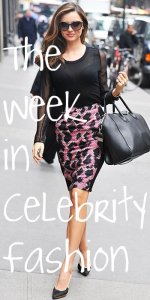 Are you ready to judge another score of celebrities?

Miranda Kerr is my undisputed queen of street style. She never looks anything less than 100% polished, but she’s so effortless, unlike so many others. The sunglasses, skirt, and purse are all deliciously enviable, but I’m truly in love with her Lanvin pumps.

JENNIFER LAWRENCE on The Tonight Show with Jay Leno
dress by T by Alexander Wang, shoes by Alexandre Birman, bracelet by Pomellato

Skintight, but if you’ve got it, flaunt it, and Katniss fucking has it. Her body looks incredible. And every other starlet on earth would have unzipped that little zipper to flash us way too much thigh, but Jennifer Lawrence is too awesome for that. Also, the fabulously wild shoes are terrific, particularly with the simplicity of the gray dress.

I don’t much anything about Felicity Jones other than the fact that she’s an English actress and she looks delightful in this Burberry gown. I like the all black accessories – their shininess against the texture of the dress sharpens the look – but this look cries out for some jewelry.

This is what you wear to meet the Queen, bitches – your sharpest McQueen suit and an incredibly fabulous but event-appropriately conservative fascinator. You go and get that Order of the British Empire, girl!

It’s a cute dress that belongs in my closet immediately, and there’s nothing wrong with this outfit, but I find myself expecting something a little more interesting from Ms. Saldana.

I love the dress, though not quite as much as I loved the romper Kristen Stewart wore last month from the same Louis Vuitton collection. It would be a much better outfit without the random red shoes, though; they’re just incredibly distracting.

Beautiful, but if I see her in any more dark Dior dresses and coats I’m going to lose my mind. Girlfriend needs to step out of her tiny little French box once in awhile.

I would love the shit out of this outfit if it weren’t for the hair, which is like the 1930s landed on top of her head but forgot to tell the rest of her hair to act accordingly. It’s ruining what I otherwise think is a fabulous look.

DIANE KRUGER in Paris
dress and belt by Lanvin, shoes by Brian Atwood

Seriously, Diane? You’re one of the most beautiful and fashionable women on earth; what the hell is up with the revolving door of terrible, dated hairstyles? I am angrier than your lion-belt right now.

Beautiful, but dull. Man, they’re really not giving me a lot to work with these week. I think gold jewelry in general was too matchy-matchy, but she certainly doesn’t need a giant gold cuff and two gold bracelets on the other hand. Certainly not with the gold-strapped purse.

I think I’d be able to like this a lot more if I hadn’t seen Rosie Huntington-Whiteley in an infinitely more beautiful green version just a few weeks ago. The dress loses a lot of its impact when it’s in black, it’s too long, and was there a bad hair epidemic on the red carpet this week?

She kept the fun Fendi clutch for the after-party, where it looks a little more at home with her LWD. I’d like the dress better if it weren’t quite so stiff and sharp and boxy, though – it doesn’t quite suit her.

The dress is two sizes too big, the draping is terrible, and the sky-blue pumps are an actual eyesore. Also, nude lipstick is great sometimes, but I’m sick of not being able to see anyone’s mouth in any pictures because of this trend. Particularly for a TV performance (I believe she’s outside the Letterman studio), a pop of color on the lip wouldn’t kill her.

I love her glasses more than life itself, but I think the suit/shoes combo is a little too much for me. The jacket is great, but the tailoring of the pants is too loose in the crotch. I get that it’s a baggy menswear thing, but she shouldn’t be able to fit that many penises in there.

Snooze. Wake me up when she’s back on prints.

The dress looks far too much like a old-fashioned nightgown, and I could not hate the shoes she paired with it more if I tried. So incredibly distracting, and they completely ruin whatever romantic potential the gown might have offered.

THE HAIR, LADIES. Get it under control! It’s a shame, because the dress is pretty great, but the boring shoes are utterly disappointing.

Amy needs to be cut off from LBDs, particularly when worn with matching pumps. It’s the red carpet, honey; you have to give us a little more effort than this.

Oof. Emily, you are so much more beautiful and chic than this look would otherwise have people believe. Your hair and makeup are atrocious, and that dress does nothing for you. It flattens your bust, it cuts out in weird places, and the length is incredibly unflattering. Get rid of it immediately, and lose the shoes while you’re at it.

By now, I’m sure you’ve read my deliciously catty Liz & Dick Recap, a snarky summary of one of the worst television-watching experiences of my life. But as bad as that movie was, this red carpet look is even worse. I’ve been begging Lindsay to return to her red hair for years, but I didn’t mean Princess Ariel red. This cartoon-hair color looks absolutely ridiculous on her. And that gown is a crime against Lindsay, fashion, and all of humanity. She has way too much going on up top to go braless in a clingy satin gown with spaghetti straps and no cups, and those cut-outs and bellydancing beads down her tummy look like a terribly executed Project Runway entry. The rest of the wrinkled, puckering, poorly hemmed gown is just as bad, and it’s a foot too long on her. But I suppose this gown is the least of her problems at the moment.

8 responses to The Week in Celebrity Fashion, Part 2