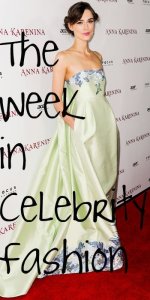 Welcome back to your regularly scheduled fashion recap, dear readers!

Wow. This is a difficult look to pull off, but Keira is working the shit out of it. The positively perfect fit in the bodice is what seals the deal – it’s those sharp lines separating her body from the draping in the back that give her a figure and make sure this skinny lil’ thing doesn’t get lost in all that fabric. The blue and white florals at the top and bottom are divine, particularly against that extraordinary mint green color. It’s too much look for a mere mortal, but on Keira, it’s a hit.

Fab color, love the cut-outs, obsessed with the eyeliner, and the shoes are lovely. I’ll forgive the wrinkles, since she’s midway through the after-party for her movie premiere and should be at least marginally wrinkled if she had any fun at all that night.

Beautiful dress in an even better color, but I think the shoes throw off the proportions a bit. Something without an ankle strap probably would have served this look better.

Helen Mirren: 67 years old and still the sexiest woman on the red carpet. I’d like the purse better if it were a clutch, and I’d like the shoes better if they didn’t have a peep-toe (at least when paired with the stockings). But holy hell, does this woman know how to make a statement: that these flash-in-the-pan starlets young enough to be her granddaughters ain’t got nothin’ on Dame Helen Mirren, the baddest bitch in Hollywood.

I would kill to own literally every single thing Miranda is wearing. This woman positively redefines street style with her incredible chicness. Now hand over the Prada purse and the Lanvin pumps, and no one gets hurt.

It’s too long and I’m still begging Taylor to introduce more color into her life, but it’s a step in the right direction for Ms. Swift. The shoulders are gorgeous, the neckline is downright sexy (something Taylor never dares to try), and the art deco-looking cut-outs and designs on the bodice are gorgeous. More importantly, they’re interesting to look at, unlike so many of the glittering princess dresses she wears. I wish there wasn’t a weird rectangular stripe coming out of her hoo-ha, but what can you do?

I’d love it a hundred times more in a color, but Florence is looking incredibly fierce. Love the stripes, love the nails, love the hair, but a touch of lipstick would have gone a long way.

Not the most unique dress on the planet, but she looks positively flawless. She was born to wear that cranberry color.

Is the sheath underneath belted? I don’t like that, and I don’t like the way the fabric seems to hang from behind, either. When you don’t wear anything but Dior, I’m going to get picky. The proportions of underlay, skirt, and shoes are all off; it’s nice overall, but still needs improvement.

MARION COTILLARD in Paris
coat and shoes by Christian Dior

You might remember Leelee Sobieski working this coat in red at a Dior fashion show; that was a look that packed a punch, while this leaves a bit more to be desired. The coat is obviously perfection, but a black coat and black belt with plain black pumps? That’s just plain boring. But Marion wasn’t alone in donning a black Dior coat this week…

Katniss, you can do better. First of all, talk to whoever is doing your eyebrows, because they’re too thin and fake-looking. You’re a powerful woman; you deserve a strong brow. Second, the hair: it’s useless. Do something with it. Third, the coat: it’s so much more flattering in a longer length. In the mini version, you just look like you’re about to flash us. Don’t get me wrong, I’d be down for that, it just seems a tad inappropriate on the red carpet. Also, the shoes: better in theory than in practice, I think.

A pretty dress ruined by a belt that’s far too busy. But at least her hair isn’t an increasingly hideous shade of awful anymore.

This was my Spring 2013 red carpet prediction for Elizabeth Banks, and I want to like it on Solange, but it’s just not happening. It’s a little too long and the accessories are distracting, which is a particularly big problem when the dress is this busy. Love the hair, but the coral lipstick is kind of a nightmare.

About as expected as can get from Selena Gomez. I feel like I’ve seen her in every LWD imaginable, and those shoes are particularly uninspired.

JENNIFER ANISTON in Los Angeles
gown and purse by Valentino

Speaking of expected, has Jennifer looked any different from this on any red carpet for the last ten fucking years? I honestly could not be more bored of this woman.

NAOMI WATTS in London
dress and shoes by Tom Ford

The dress is a little ridiculous, and the back cut-outs and high neckline and wings make her boobs look a little wonky. The shoes are terrific, but lord almighty, I cannot support that soap opera star hair. Let’s get the rear view:

The back is totally sexy, but that makes the wings on her arms look even more strange, I think. The gold tip of the stiletto is a fantastic touch, though.

She’s actually wearing this dress backwards. I can only hope it looked even more like a wrinkled party favor worn normally, and that’s why she flipped it.

If you’re going to be a label whore, at least be subtle about it. And those shoes are the ugliest effing things I’ve ever seen.

No. No to your lipstick, no to your Rainforest Cafe employee dress, no to your schizophrenic, half-Wellies, half-sandals. NO.

My late, great Bubbie dressed more youthfully than this when she was 87 years old; she’d have taken one glance at this photo and called Jessica an altacocker. What in the actual fuck are you doing, Jessica? They’re not making a Golden Girls remake, and if they were, they sure as hell wouldn’t cast you. Marriage does not magically transform you into a nonagenarian; and for the love of god, LOSE THE CLIP-ON BANGS.

10 responses to The Week in Celebrity Fashion, Part 1