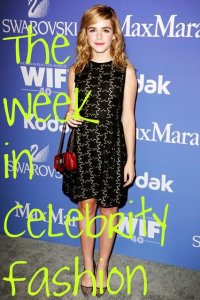 The bitchfest continues with another score of starlets to judge.

Enough about what an incredible actress little Sally Draper is – let’s talk about her unstoppable style. At thirteen years old, she’s one of my favorite starlets, and looks like this prove why. Age-appropriate but totally chic dress, funky and playful accessories, perfect eyebrows, and barely-there makeup – we can all only pray to look this good.

One of my favorite things about Kiernan is that she rarely wears jewelry on the red carpet, which is part of why she always looks so clean and youthful and not as overdressed as a lot of teen stars. I love that graphic top with the adorable green skirt, and the shoes are just terrific.

Let’s hear it for the teens, keeping the red carpet modern and utterly fabulous and making grown women weep with jealousy. I’d kill for this dress, and I love it Hailee – it’s so wearable, but it’s got a unique chicness to it. And those strappy sandals are just fun as hell, even if the purse is a little too big.

I hate the matching blue accessories, and I don’t think I’d like those shoes in any context, but the dress, hair, and makeup are flawless.

Killing it. It’s a touch too long, but this woman out-dressed basically everybody at the Tony Awards.

I wish it were in a color, but I do love those very dangerous-looking cut-outs. And the bracelet is lovely.

Emmy, this gown is a dream on you, but that spray tan is a PROBLEM. You look positively tangerine.

Something about this bright-eyed makeup makes Jessica look almost unrecognizable, and this dress is a lot sexier and more attention-grabbing than most of what she wears. I, for one, am always in favor of stars taking chances, but I wish that riskiness had also been applied to her shoes, which are just too boring for the rest of the look.

SCARLETT JOHANSSON at the Tony Awards
blazer, dress, and shoes by Saint Laurent

I don’t think this is even remotely formal enough to wear to the Tonys, but I would love it so much at a movie premiere. That tuxedo jacket is gorgeous, the top is lovely, and Scarlett’s makeup is delicious.

It’s not life-changing, but it’s free of the desperation that usually emanates from Heidi’s ensembles. So that’s something.

The print on this dress is all kinds of gorgeous, but I’m definitely not sold on the length. And I think this look called for sleek and modern hair and makeup, not full-on Betty Draper drag.

It’s almost too effortless, but her general hipster chicness manages to make this dress look fabulous when it easily could have gone “I didn’t have time to change after my tennis match.”

The dress is kind of underwhelming, but I think the naked shoes are cool.

Why can’t Amy dress more like this on the red carpet? If the girl can mix prints this well walking down the street or arriving at an interview, why doesn’t she dress in more interesting gowns when it counts?

See what I mean? It’s not terrible, but it’s pretty instantly forgettable.

Love the skirt and the shoes; hate the top and the purse.

Emma’s usually wearing something with prints or patterns or interesting cut-outs or peplums, so to see her of all people in an ill-fitting LBD is a pretty big disappointment. The shoes and purse are lovely, but they’re not enough to make this a memorable look.

Smile, Duchess! That print looks great on you, even if that fascinator isn’t working particularly well.

I’m sick to death of Stella McCartney jumpsuits, and I think those shoes are just hideous.

Diane, WHAT IS HAPPENING WITH THAT BUSTLINE? The uneven, too-high sweetheart line would be bad enough, but the matte fabric poking into that lace looks just as terrible. It’s unflattering, the length is weird, the shoes are old-fashioned – she looks like she hasn’t seen a red carpet in decades. It’s just too bizarre.

Respond to The Week in Celebrity Fashion, Part 2