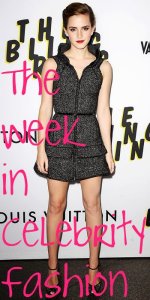 It’s time for a trip down the red carpet, dear readers.

Thank God for another Emma Watson-filled press tour! She’s never better than when she’s in promo mode, as she proves with this adorable tweed Chanel shift, fabulous shoes, and vampy makeup that completes the look perfectly. Never change, Emma, darling.

First of all, the hair is adorable. Second, this dress is my new favorite thing on earth. I usually don’t like things that look like they’ve been recently clawed by a bear, but I think that tear down the bodice is all kinds of awesome. The white pumps are perfect, too.

I don’t love the length of that pant, at least with that shoe, but I love this weird little top so much, I hardly care. The faux bob is incredibly chic. The earrings are lovely, but I think she could have used a bracelet too.

When she puts in a modicum of effort, she can absolutely destroy it on the red carpet. That’s why I get so frustrated when I see her in one flowy neutral-colored gown after another – because when she wears something with a little shape and interest, she kills it.

I love this slightly grandmother-looking dress, at least on Florence. The shoes are fab, particularly with the black nails and toenails, and that clutch is pretty fucking awesome.

ZACHARY QUINTO at the Tony Awards
tuxedo by Christian Dior

A pop of color in her jewelry or the purse would have been nice, but this little white dress is stunning on her and the white pumps are absolutely fabulous.

What better way to say “I ain’t pregnant” than looking this amazing in a crop top and tight horizontal stripes?

I think this is that exact right amount of effortlessly cool and super-fashionable that many starlets aim for and few achieve.

I like everything she’s wearing, I’m just not really sure that top and that skirt belong together.

The gold bar hanging off her neck is a little too distracting for me, but I love the sort of futuristic feel to this, and the color is great on Milla.

A little boring, and the hair is kind of a disaster, but the shoes are cool as hell.

Dull but pretty. Is there any other way to describe any of Amy Adams’s looks?

The skirt and the jacket are adorable, but that top is shaped too weirdly for me.

Jesus. Could this dress scream “VIRGIN” any louder?

It’s not often there’s an Elie Saab dress that I truly dislike, but this fits the bill. And those shoes are even worse.

She’s worn something nearly identical to this at least four hundred thousand times before.

Neither of those colors work particularly well on her. And the shininess combined with the shortness of the dress makes it look really tacky.

This was my Pre-Fall 2012 red carpet prediction for Eva Mendes, but I’m really not sold on it on Amanda. She’s positively drowning in it, and the red under-eyeliner is maybe the worst thing in the entire universe.

CARRIE UNDERWOOD at the CMT Music Awards
jacket and shorts by Edition by Georges Chakra, jewelry by David Yurman, purse by Swarovski, shoes by Jimmy Choo