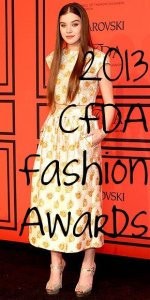 Dear readers, it’s time to judge all the fashion industry types who partied at the Council of Fashion Designers of America’s annual Fashion Awards.

Hailee Steinfeld is sixteen years old, about to play Juliet in a highly anticipated Romeo and Juliet, and more quirkily fabulous than most of us could ever hope to be. Basically, girlfriend’s got it ALL – youth, talent, and style. I am simply obsessed with her little crop top and matching skirt, the length of which is so wrong it’s right. And I love the gold platforms (I’m a sucker for anything with an ankle strap). Darling hasn’t changed her hair in the two years she’s been in the limelight, though, and while her long locks are lovely, I hope she gets her rebellious teen haircut soon.

I don’t think I would like this on anyone but Kerry – the color looks like it was made for her, but it wouldn’t work on a lot of other starlets. And the boxiness of the bodice is a little off-putting to me, but again, it looks better on Kerry than it would on almost anyone else. Let’s get another view:

I think the twisted straps are lovely, but the crinkled fabric  below it makes it look like she’s got an elastic waistband, which is about as far from fabulous as it gets. The back peplum thing is a nice touch, though.

I am a little bit obsessed with Gay Spock. This boy can dress.

First things first – stop wearing those shoes to every single event and thinking no one will notice, Rooney. No detail gets past the Democracy Diva. But even though I’ve seen her in a lot of black gowns, this one is particularly lovely. The textured print alone makes it much more interesting than most of her preferred minimalist looks. And the makeup is almost breathtakingly beautiful, though a little more in the way of jewelry wouldn’t have hurt.

I don’t love the illusion netting, but it’s simple, glam, and sexy as hell.

I usually hate when stars wearing too many different shades of the same color, but the yellow-gold shoes with the more taupe-gold gown look sort of badass. Probably because they look intentional, whereas usually the almost-but-not-quite matching colors look like mistakes. I’d still love to see her in a gown that actually fits, but I’ll take what I can get.

The dress might be just a touch too precious on her, but that neckline is truly gorgeous. Absolutely stunning. And the color is flawless on her. The shoes are terrific, but they threaten to push this look into bridesmaid territory.

It’s tough to make Karlie look bad, for obvious reasons, but I think she could have gone with something a little less predictable than this.

I think the proportions of the top to the shorts are completely stupid, but I love the idea of this look.

Boring Hamptons bride. But the necklace is fun.

Who on earth made you up to look like this, Miranda? You should probably have them killed, is all I’m saying. I like the shoes, but not much else about this really works for me. As usual, I find Miranda lacking on the red carpet in spite of her incomparably cool street style.

This dress is just plain overdesigned, and the severity of the styling isn’t really helping. The lips and eyebrows and earrings and bracelet are all too much; the result is a bit overwhelming.

Ugh. Wake me up when she wears a color.

Elizabeth, unlike her sisters, can usually be counted on to wear something that does not resemble a tent. Unfortunately, when she’s under the influence of Mary-Kate, all rules go out the fucking window, apparently. Also, is she wearing slippers? What is happening? And is it just me, or does Mary-Kate look like Zsa Zsa Gabor?

Jesus. Miranda Kerr’s terrible makeup artist seems to have gotten to Ellie Kemper, too! I already mentioned my general distaste for mismatched shades of gold, and unlike Nicole Richie’s styling choices, these just look like a mess.

DO YOU EVEN OWN ANY OTHER GOWNS?!

Those shoes are nausea-inducing. I think this dress is a bit of an overworked mess to begin with, but in true Olivia fashion, she tacked on a hundred thousand different supremely distracting accessories. And thus destroyed any chance she had of looking good.

Your dress is boring and overdone, and none of your accessories make sense. Go home and try again.

Honey, this is not a bonfire in Venice Beach. This is a fashion awards show, for crying out loud. I’m not saying a ball gown was in order, I’m just saying whatever the hell this is, it’s all wrong.

Congratulations, Rose. You own the world’s fanciest apron.