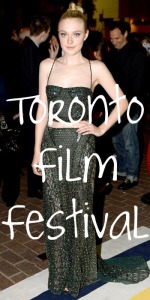 Let’s give  grown-up Dakota Fanning a very warm welcome to the red carpet, because I’ve never seen the 19-year-old starlet look like this before. The dark emerald green color is so unusual and incredibly cool, and the couture handiwork is exquisite. The stripped-down styling lets the embellishments do all the work, and stops her from looking like she’s wearing her mother’s clothes. Top it off with a chic topknot (a refreshing change from her usual stick-straight locks), a dash of eyeliner, and she’s the queen of the red carpet.

What’s not to love? The suit is awesome – I’ve seen lace cut-outs before, and I like them as a trend, but I’ve never seen these sort of puzzle-piece cut-outs before. They’re funky as hell, and though I like Nicole Kidman’s style, “funky” isn’t the first word I normally associate with her. And the bow-topped pumps are simple but chic.

The French actress kills it, bringing Parisian fierceness and old Hollywood glamour to the Toronto red carpet. I love the sleeves on her embellished LBD, and the hair is a work of art.

The shoes aren’t my favorite, and the rest of the styling could definitely use a modern reboot, but this girl is made for these nature-scene hipster-chic Mary Katrantzou dresses.

The geometric print doing that ombre fade into the skirt is some serious new-wave fabulosity. But this look is becoming a bit of a uniform for her:

Don’t get me wrong; if I had those ridiculous baby-blue bedroom eyes, I’d be showing them off with every shade of blue imaginable, too. I just feel like this is becoming a little rote for her.

The neckline isn’t my favorite, and now that I consider it, the length isn’t great either – the proportions in general are kind of a problem. But the lady looks great in white, and the snakeskin shoes were a stylish choice.

Like, is she even real? Or is she actually a Disney character? Because I can’t even believe someone could look this perfectly princessy.

This is way more twee and yet way less adorable. The color and shininess of the fabric are very little-girly, and the silhouette doesn’t help.

My new obsession Lupita Nyong’o works the hell out of her head-to-toe Prada look. The length of the gown is killing me, as she’d look positively perfect if the hemline were just a little bit shorter. As is, the dress shortens her a bit. But I’m still looking forward to following her every fabulous move on the red carpet.

Apparently, Julia Roberts is still doing things? She must have been out of the limelight awhile, since I’m pretty sure this Dolce & Gabbana dress has been worn by eight hundred billion different starlets since the last time I blogged about her. The shoes are gorgeous, but not with this dress.

I think she’s worn this dress about a hundred times before, but she gets to use the pregnancy excuse for wearing something simple and comfortable, and for her roots being half a rainbow away from the color of her the rest of hair. Regardless, she’s glowing so hard, I need sunglasses just to look at her fucking radiance.

To the Felicity Joneses and Alexa Chungs and Mia Wasikowskas of the world: unstyled hipster hair does not enhance your looks. It actually makes your incredibly expensive, beautiful wardrobes look stupid as hell. So just run a brush through your goddamn hair already, will you?

This was my Pre-Fall 2013 red carpet prediction for Diane Kruger, but I can’t say I like it much on Hilary. First of all, the fit is a mess, making the shoulders and sleeves look kind of wonky and strange. And I don’t think the length of that skirt works with the relatively low heel of her shoe – there’s just a proportions issue there that makes it hard to focus on the beauty of the dress and the woman.

Oh, what the fuck else is new.

HAIR. BRUSH IT. I WILL NOT SAY IT AGAIN.

Naomie Harris, you and your studded Louboutins are way too good for this poofy cupcake disaster of a Marchesa dress. Go, now, Naomie, take your Loubs and run while you still can! Before the dress actually eats you!

Marion Cotillard: living proof that you can be beautiful and French and perfect and STILL look like a complete fucking asshole when you wear a sheer, ripped-in-half slip over a bra and granny panties with shoes pointy enough to kill someone if you trip down the red carpet.

Jennifer, please stay very calm, because I don’t want to alarm you, but I think whatever is on top of your head is still alive and is about to take vengeance against you on behalf of the tacky animal that died for your shoes.