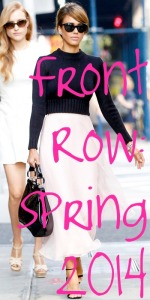 New York Fashion Week stops for no one, dear readers. (I mean, technically it’s already ended, but as I always say, it ain’t over until the diva judges everyone as unworthy of getting to sit front row at a fashion show.)

Parisian-meets-New-York chic. Is there anything better? This is such a simple look, yet it’s endlessly glamorous. Those are the looks that Jessica Alba wears the best – classic pieces with a little modern oomph.

Jessica Alba also tends to kill it when it comes to monochromatic looks. I think all of my favorite looks of hers have been black-and-white Narciso Rodriguez ensembles. I wish this were just an inch or two shorter, because the proportions as-is tend to shorten her a little bit. But at least she is refusing to let the Summer of the White Pump die.

Gorgeous. The problem with dressing for Calvin Klein’s events is that so many of the label’s designs are so painfully boring. CK shows and parties tend to feature a thousand starlets in black or white dresses; no matter how nice that simple little black/white dress is, it gets incredibly dull when you’re looking at a whole front row of them. So respect to Naomie for finding a Calvin Klein look that’s a little more outside the box. This sort of smoky blue is such a beautiful shade on her (on anyone, I think), the proportion of crop top to skirt is flawless, and the powder blue strappy sandals were a lovely choice.

Marginally less interesting than her previous CK crop top/skirt combo, but still sharp and chic. She’s tall enough to pull off the interesting length of that skirt, the lucky bitch.

JULIANNE MOORE at the Hollywood Reporter party
dress by Balenciaga

Shit, you guys. I know I’ve railed so hard against black stockings with black shoes in the past, primarily in reference to the eternally stockinged Zooey Deschanel, but it works so brilliantly with this phenomenal Balenciaga LBD that I can’t even complain. Julianne Moore looks phenomenal here. A toast to the Hunger Games casting team, who keep adding terrific actresses with killer wardrobes to their casts. The first movie’s press tour had some of the most memorable fashion in recent red carpet history, thanks to Jennifer Lawrence and Elizabeth Banks (and their stylists, of course). Adding Jena Malone (who I’ll get to in a few minutes) for the second film and Julianne Moore for the third and fourth? It’s going to be red carpet GOLD.

You see what I mean about the endless stream of Calvin Klein dresses, right? At least Nicole keeps hers mega-chic with the addition of some truly fucking amazing shoes. Seriously, I want to rip those things right off her feet and wear them every minute of my life.

I think the jewelry is a bit much, and doesn’t really go with the vibe of the dress or the shoes. The dress definitely needed some accessorizing to make it more interesting, but I don’t think that chunky gold style was the way to go.

I wish the shoes didn’t have those giant black things over the ankles, but I actually love everything else about this ridiculous toga-dress. The cut-outs are just enough, and the draping is pretty damn flawless.

EMMY ROSSUM at the DKNY party
dress by DKNY, shoes by Christian Louboutin

I love the black straps with the gold textured fabric, though I think there’s something a little funny about the way that bodice lays. Regardless, she looks incredibly beautiful here. The cuff and earrings are fantastic pieces, though that straight side-parted hair isn’t the most flattering look on her.

KARLIE KLOSS at the DKNY party
dress by DKNY

The shoes are beyond stupid, but at least she’s clearly having a blast, which is what Fashion Week should really be about.

I’ll admit, I giggled out loud when I saw this for the first time. And since that was definitely Gaga’s intended reaction, that makes me kind of love this.

RITA ORA at the DKNY party
shoes by Christian Louboutin

I love a blazer more than anything in the world, but this outfit would be a hell of a lot better without this glaringly white jacket.

I think Lady Mary pulls this off surprisingly well, considering how matronly that blouse is. I think it’s the perfect  fit of that skirt that helps modernize this look a little bit, though the silver pumps are a bit too plain. She could have brought this look into the 21st century with a killer pair of shoes.

Catching Fire‘s Johanna, better known as Jena Malone, hit the Monique Lhuillier show in one of the best little black dresses I’ve seen this week. The shoes are far too boring – there’s almost no shoe you can’t wear with a little black dress, so why not take a risk? But I am obsessed with her new blonde bob.

Can everyone on the red carpet agree to stop wearing bracelets over their sleeves? I think it’s just one of the stupider trends I’ve seen in recent memory. I don’t think this sheet-dress does anything for Jessica – the cut and color both seem all wrong for her – and pairing a white purse with an ivory dress makes very little sense to me.

Nope. Not even going to pretend I can handle that buttoned-only-at-the-top cardigan. She usually does a great balance of age-appropriate and fashionable, but this feels somehow little girly and old lady at the same time. The dress just isn’t very nice, and the shoes aren’t right for this look.

ROONEY MARA IS SMILING. I REPEAT – ROONEY MARA IS SMILING. I have virtually never seen this happen in the years that I’ve been analyzing her style. I’m not sure what she’s smiling about, since this dress makes her look like she was recently mauled by an injured animal, and those shoes are a crime against humanity. But it’s good to know that it’s even possible for her to smile.

Ah, this is the stoic and terrifying Rooney that I’m familiar with. Though with that coat, I’m kind of scared she’s about to flash us.

What IS this? A split-open vest over a sheer slip over a miniskirt? I don’t even understand what I’m looking at right now. This is just upsetting.

SOLANGE KNOWLES at the Noon by Noor show
jacket, top, and shorts by Noon by Noor, shoes by Sophia Webster

Solange, I support you in almost everything you do. But if you keep wearing shorts that could fit six of your legs in them, and wearing SOCKS, for fuck’s sake, with your designer heels, I will be unable to remain on your side.