Because a music industry event without nudity is like a week without a weekend.

Glam as all hell, stupendously sexy, and serving up a 21st-century gothic twist on 1920s red carpet realness. I AM HERE FOR DEMI LOVATO, AND NO ONE ELSE. 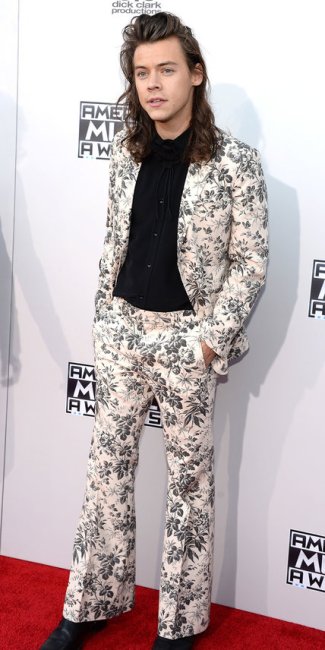 This would have ranked as Best Dressed if those pants were straight-legged instead of flared. I’m just not ready for the return of the bellbottom. But infinite points to Harry Styles for werqing the ever-loving shit out of this floral ensemble, without looking like he’s wearing a woman’s pantsuit.

It’s amazing how much more I like her without that fucking high ponytail that always made her look like an especially uppity middle-schooler. This dress is sweet and not boring, the shoes are funky and event-appropriate, and she doesn’t seem desperate to show off as much skin as humanly/legally possible, so I guess I’m on board. (The standards are low at this event, dear readers. We’re just a couple looks away from sliding into some serious shenanigans.)

She needed a crazy metallic shoe or maybe an extra-long necklace to sell this as an AMAs look – the suit is exceptionally divine, but Ashley needed to add something funky or whimsical to make it feel event-appropriate. In any case, I would punch a kitten in the face if it meant I’d get to wear this suit (and look this good in it, natch).

I know he’s wearing some sort of cashmere turtleneck, but somehow, against all odds, he is actually pulling it off. How is it that the men at this event managed to have more fun with their wardrobes than most of the women?

I have absolutely no idea who this is, but she looks extremely lovely. Sure, there’s a weird bulge of fabric above her waist, and yes, this seems more appropriate for a – what’s the right way to say this? – less batshit-fucking-nutso event than the AMAs, but sometimes I need something normal and pretty to focus on. Hannah is that something.

The wideness of the neckline and the cut of the shorts are all wrong for Hailee. And the accessories don’t work with this romper at all. I’m happy Hailee’s transition into pop music doesn’t mean she’s showing up fully nude on the red carpet, but this isn’t much of an improvement.

If the top half of you looks like a fussy old lady at the blackjack table with the highest buy-in in Atlantic City, it doesn’t matter how many high slits you put in your skirt. You will still look like you’re in costume as one of the actual stars’ grandmas.

Did someone lose a Barbie doll? Something tells me I may have found one.

Don’t you wish we could pick and choose the parts of the 90s that we want to come back in style? Like, let’s just have a pre-9/11 world, and another season of My So-Called Life, and let the 90s keep the chokers and hair barrettes in the past, where they belong.

This looks like it was conceived at Forever 21, then embellished by way of King’s Landing in Westeros, and finally sewn for someone whose body type in no way resembles Nicki’s.

The center-parted hair is not great, and what is that on the sides of the dress? Rubber tubing? I can’t begin to understand this, so let’s get another view:

That is ferociously ugly. It falls in an insane place on her body – doesn’t it look low enough for a solid two inches of ass crack to be showing, and yet there is no crack to be found? And if you’re in Hollywood, over the age of 16, and still think it’s cute to grow your hair down to your invisible ass-crack, well, then I have nothing left to say to you.

Weak. She wore a nearly-identical sleeveless version of this dress to the same event two years ago. And she shouldn’t need the Democracy Diva to tell her that – what else are you paying stylists for, if not to pay attention to things like this? (I await your payment for my wisdom, Ciara. Make the check out to CASH.) Not to mention the countless women, including Ciara, Beyoncé, J.Lo, Rihanna, and Nicki Minaj, who have spent the better part of the last three years in gowns that are basically indistinguishable from this one. I never thought I’d hear myself describing a sheer, cut-out, studded, feathered, embellished-to-death gown as “boring,” but here we are. This is what the current red carpet climate has wrought.

So boring, she may actually have her music industry pass revoked. Sorry, Meghan, but you are no longer allowed to EXIST in this universe; that is how boring your wardrobe is. 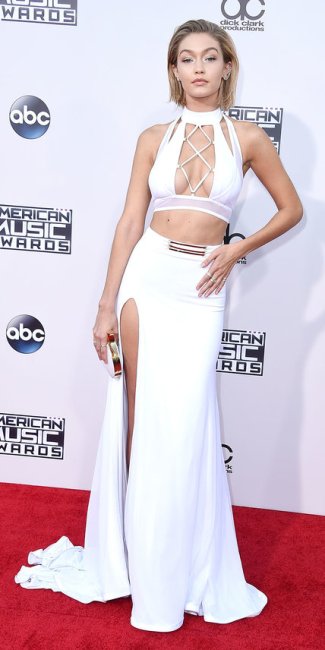 Apparently, we were supposed to love this? Maybe I’ve gotten old, but I’m not sure why I’m expected to lose my shit (in a positive way) over the world’s ugliest sports bra and a skirt that doesn’t fit. 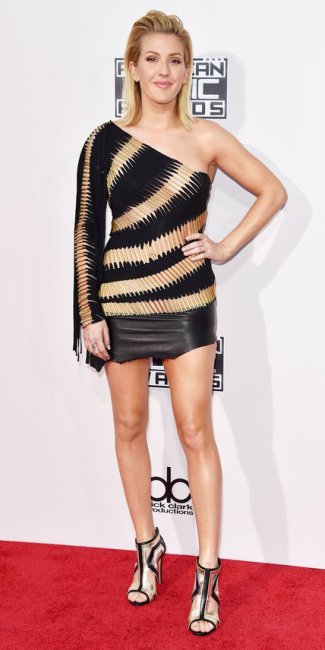 Who? Or better yet, why? And more importantly, will we never learn There’s Something About Mary‘s most important lesson?

Over/under on how many times Carrie tripped on her goddamn sleeve-trains? I don’t wish pain upon her, but maybe this is why you shouldn’t wear GODDAMN SLEEVE-TRAINS. I know country stars have their own definitions of what is fashionable – definitions that I will never truly understand – but this like it should be a hard pass in every context.

And now, 10 (yes – TEN) J.Lo ensembles in a row. First up: an Elie Saab knock-off and a topknot that makes me cringe. 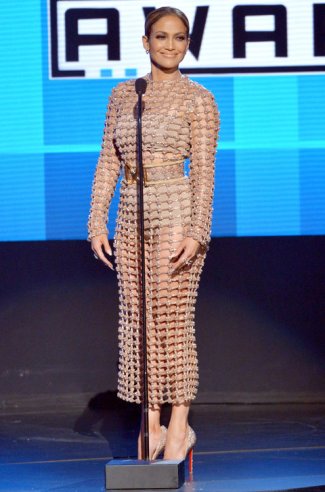 Hey, look! I found one I don’t hate! I’m not a fucking puritan – I’m not offended by the sight of skin or even by an overwhelming amount of cut-outs. I just think they need to be deployed in strategic ways, and I think they get old FAST when every damn woman on the red carpet is wearing them. But this doesn’t look like every other cut-out dress I’ve ever seen. This has texture and a bit of toughness, and I like that. 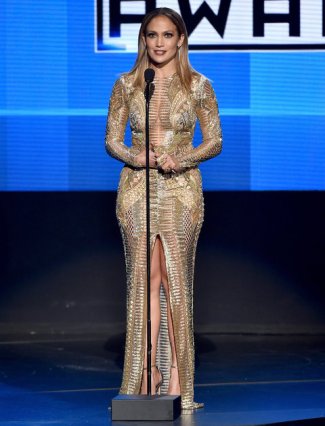 Well, sure. I mean, who doesn’t want to look like they’re a robot undergoing quadruple-bypass surgery, right? 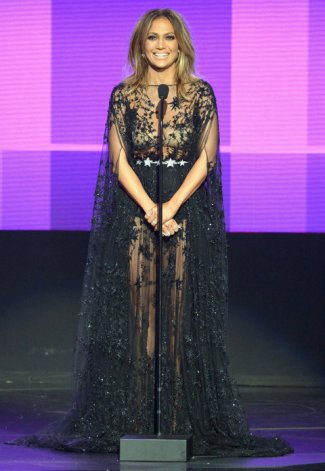 It’s not blowing my mind, but it’s not offending me to my core, either. For J.Lo, let’s call that a win. 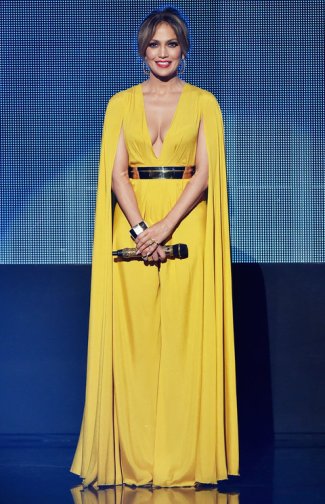 Surprisingly tame and stylish for a woman who has never seen a collection of tiny strings without saying, “oh, my new dress is here!”

That neckline is a crime against humanity, but I actually don’t hate this – for a performance look, that is. Trying to be an actual human while wearing this seems like it would be very difficult, but it seems tailor-made for flinging yourself around a stage while lip-syncing to your own songs. 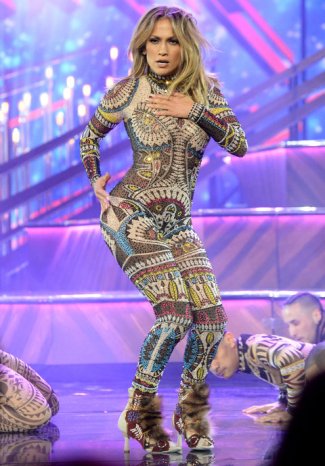 Again: wear this off the stage, and I would probably never let you live it down, even if you live to be a thousand years old and cure cancer. But for stagewear, for J.Lo – I mean, look at how she’s posing in it, and tell me that’s not perfectly on-brand.

One of the most aggressively ugly dresses the world has ever seen. I am not sure I even knew how much I could hate a piece of clothing as much as I detest this gown. I may need to go on some sort of Eat Pray Love journey just to find my soul again, after this gown came along and sucked all the life out of me.