END_OF_DOCUMENT_TOKEN_TO_BE_REPLACED

Who cares about the runway when everybody important is in the front row? Here’s what the celebs you love to hate most rocked at New York Fashion Week.

END_OF_DOCUMENT_TOKEN_TO_BE_REPLACED

Get ready, dear readers, because it’s time to play stylist to the stars! I’m taking the most glitzy-glamorous, red carpet-worthy gowns from ALL the Spring 2011 runway collections – NEW YORK to LONDON to MILAN to PARIS – and I’ll be deciding which of your favorite celebs will be wearing them out on the town. Let’s have some fun! 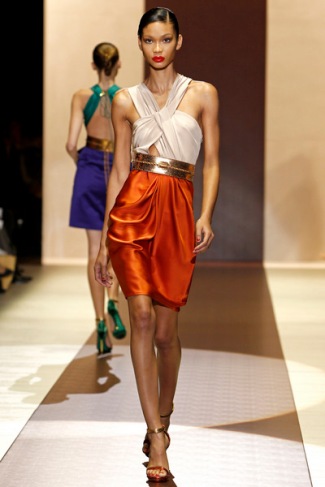 and GAGA will wear…

and of course, GAGA will wear… 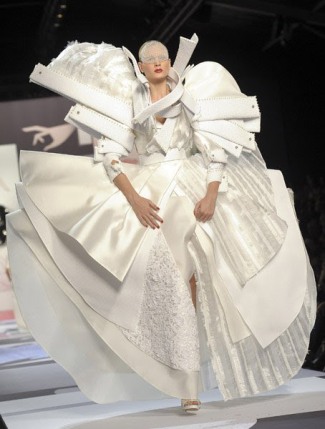 And with that, your Spring 2011 posts are complete!

Will’s wife is, on a normal day, an incredibly beautiful woman. She’s barely five feet tall, which makes her difficult to dress when designer gowns are made for women who are nearly a foot larger than her. That’s the problem here, with this Marchesa cocktail dress. On a woman with neverending legs, this short, squat dress might have worked. But instead it just packs on bulk to Jada’s itsy-bitsy figure, making her look stumpy instead of slim. Also, did she dip her legs in a vat of olive oil in the limo? She’s awfully shiny.

The hair is limp, she’s not wearing enough makeup, and that dress is just so boring. Mrs. Cruise looks uncomfortable and sad, and those looks don’t work on anybody.

Mrs. Michael Douglas reminded the world of how awkward her May-December romance is at the Tonys this year, by discussing their sex life while accepting her (completely undeserved) award. Let’s talk about the face – just what is going on up there? She looks like she’s had some bad Botox or a botched face lift. And that dress is better suited for a little girl at her first big party than a woman bragging about sleeping with an AARP member. Iced periwinkle can’t be worn by girls over the age of 17. It should be a law.

This actually was not one of my favorite looks of the night, but I still enjoyed it. It seemed more appropriate for the Country Music Awards than the Tonys, and although Cheno is tiny, I think that hemline is a bit short even for her. But she still looks every bit the adorable little woman she is, and if the dress were three inches longer, I’d love it.

Idina looked simply glorious, and younger than she’s looked in years. Her skin looks flawless, her dress is intriguing but simple; mature but not matronly; youthful but not silly. I think she should’ve done a diamond necklace as well, just to glitz it up, but Idina looks as divalicious as ever.

What an astoundingly beautiful color. This is a perfect red carpet look – simple in design, but the color ensures that every eye on the Tonys red carpet will be on Miss Lea. Once again, I’d like to see a blingy necklace, but I don’t think Lea could have picked a more flattering, fun, or stylish gown. Kudos to her!