Who cares about the runway when everybody important is in the front row? Here’s what the celebs you love to hate most rocked at New York Fashion Week.

She’s not even human. 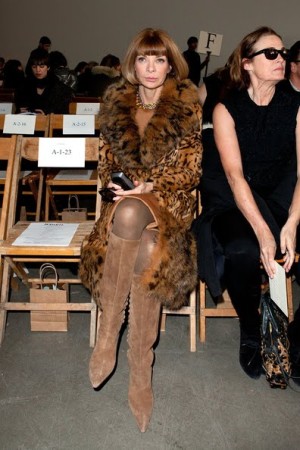 The notorious Vogue editor fixes her impossible-to-please eye upon the runway. She’s more intimidating in that fur than an actually cheetah. I’m no fur fan, but even a vegan would punch a calf in the face for a chance to wear that coat. 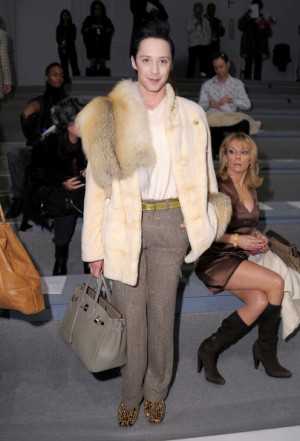 Johnny Weir in gold shoes, women’s pants, a fur coat and a Birkin bag? This, my dear readers, is the definition of queer. He looks fabulous, though I think the expression of the woman sitting just behind him says it all. 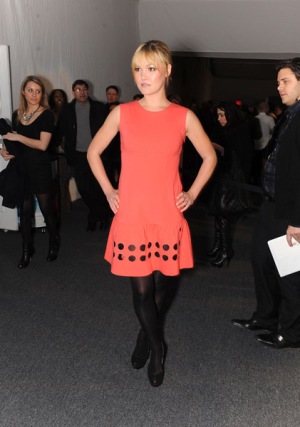 This was a big color this week. I’m obsessed. This is a perfect dress for a fashion show – something simple that you can accessorize the hell out of – but I wish Julia had done a little more with it.

Again, starlets love their minimalist fashion at the runway shows. But who is still doing a center part, stick-straight hairdo besides this girl and Sammi Sweetheart?

Great color, and it was huge on the runways this week too. She looks flawless. 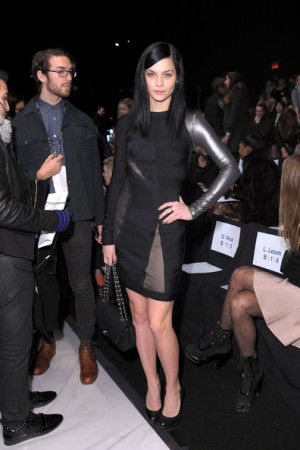 This bitch always looks so miserable. Like the poor man’s Kristen Stewart, except she has even less reason to be famous. (She’s a DJ/model/someone who started showing up at enough places that eventually people just started treating her like a celebrity.) I know those Herve Leger dresses are tight, but smile through the pain. 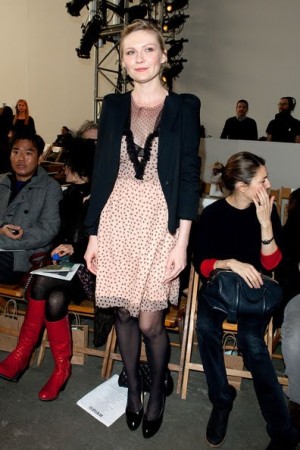 Fabulous. That’s probably what I would’ve chosen to wear, with a pop of color.

The basic Marchesa dress that seemingly every starlet has worn this year. I mean, this is basically the mandatory wardrobe for front row at Marchesa. She looks decent in it, but the hair is frizzy and the makeup is too heavy.

Wow. This is the kind of downward spiral that comes with breaking up with your super-hot but super-gay boyfriend. This is a disco-hippie nightmare. 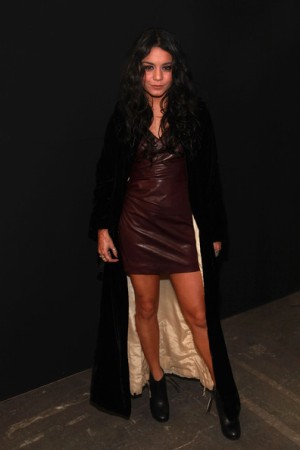 I know there are people who enjoy strutting around in a garbage bags and witch’s robes, but most of them are meth addicts, not Hollywood starlets. Luckily, Vanessa Hudgens is both!

I’ve never really gotten the appeal of this girl – literally everything she wears just looks a little bit off – but I can’t find something bad to say about this, except that she needs her roots touched up in a bad way. I just can’t imagine a point in my life where I know I’m going to one of the biggest shows in all of New York Fashion Week, and I DON’T MAKE SURE MY HAIR LOOKS GOOD. Don’t get complacent, bitches.

That bag is tacky for sure, but Cheno can do no wrong.

Just because it’s by Marc Jacobs doesn’t mean it’s appropriate for his runway show, Leighton. This dress should remain in the depths of the Spring 2011 collection from which it came, when Marc was clearly doing a lot of blow under the pretense of being inspired by the 1970s. It does make your waist look uber-tiny, but those shoes are a problem, and STYLE YOUR HAIR.

Those shoes are a little twee for a grown woman, but the dress is cute enough, I guess. Isn’t Joanie starting to look a little old, though? Beauty sleep is your most important accessory, dear.

Very chic, albeit expected. I love the peek of the black bra strap, because it looks great with the black strappy shoes – I even like the black toenail polish, which I usually loathe on the red carpet. The orangey-red is a great color on her, and I love a little blonde chic who actually embraces her light skin instead of fake-and-baking to death. Great makeup, and though I’d have gone with more volume in the hair, the slicked-back look keeps it chic and modern. 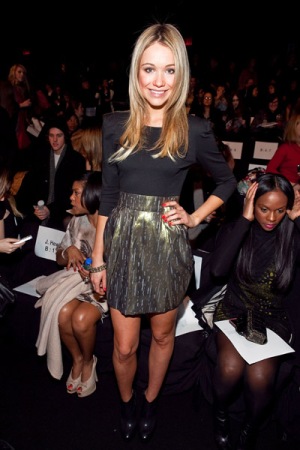 Love this print, but I’m over that ruffled neck trend. I remember this dress from Christian Siriano’s Spring 2011 collection; I wasn’t crazy about the silhouette then, and I’m still not now. But I hope Christian does some accessories or smaller pieces in that print – I think it’s definitely a less-is-more sort of look.

Awful. Hair, makeup, dress, accessories – none of it is working for me.

Dear beautiful, statuesque, stylish women: Why do you insist on donning haircuts that seem intentionally designed to make you look uglier than you actually are? This cut screams “I’m a recovering alcoholic who chopped off my ponytail during my last stint in rehab” rather than “fashionable British starlet and TV personality.” But those shoes are AMAZING.

The hair is better, but still well within mental-patient territory. And I’m over those giant round-toed pumps. And this dress makes her proportions look awfully strange.

Well, now I know she’s doing this specifically to torment me. That jumpsuit, which may or may not have pictures of ANIMALS all over it, with black socks and those red shoes? I’m having a fashion embolism.

Check back later tonight for more of what your favorite celebs wore to the Grammys and other red carpet events!