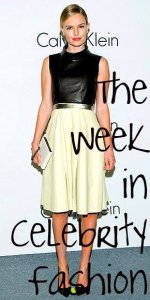 Welcome back to your regularly scheduled programming, dear readers.

KATE BOSWORTH in Seoul // dress and purse by Calvin Klein

Attention, universe: This is how you do minimalism right. It’s all in the pitch-perfect details. I’m no Calvin Klein fan, and I don’t think anyone really looks good in the leather dresses that have been so trendy lately. But this is an exception; in fact, it’s exceptional. Love the collar, obsessed with the gold waistband, and the whole dress is just so perfectly fit. The boxy white clutch was a great choice, and the simple black pumps are so sharp and chic that they don’t bore me. The pop of pink lipstick and slick side-part hair style this look perfectly. I never used to be a fan of Kate, but she’s given us some delicious fashion lately. I’m starting to come around.

CHLOË MORETZ in Seoul // dress and shoes by Calvin Klein

Similarly chic in her minimalist style was the adorable Ms. Moretz. The dress looks like it was made with her in mind, so simple and youthful yet stylish, and that orange-red color is a dream on her. I’ve seen those T-strap off-white platforms too many times, and I think they’re a bit much for such a young girl. But like Kate Bosworth, she made good use of a boxy Calvin Klein clutch.

I am positively drooling over this dress. I want it in my closet so bad, I can hardly stand it. The girly silhouette and stunning forest green color are amazing on Lily, the little porcelain doll that she is. She doesn’t need quite so much makeup, but it does make her look so much like Snow White, so I suppose it’s just good promotion. Her gorgeous wavy hair is perfect, but the styling is underwhelming. The shoes are too boring for words, as is the purse. Her cocktail ring is adorable, but she absolutely needed earrings or a bracelet too.

If you ignore the Elvis-smelling-something-weird look on her face, you can see the elements of a pretty stylish look here. We all know I can’t stand a buttoned-up blouse, but the double-breasted blazer is chic and the skirt is absolutely adorable. Even the shoes are funky and stylish! The hair is still bizarre, but it at least looks like she made some attempt at styling it, even if it wasn’t a successful one. And that smoky copper eye makeup looks dramatic and beautiful on her.

I don’t know that there’s a reason to show sternum and sideboob simultaneously, especially when you’re wearing granny panties under a sheer skirt. But she’s still working the hell out of it – the shimmering, sheer draped fabric suits her and softens her, but she still looks strong and chic. Love the wavy hair and the white talon-like nails!

It’s refreshing to see Vanessa looking so much, you know, not like a dirty unwashed hipster! I love that she’s trying old Hollywood glamour on for size without ironically combining it with, like, a fedora and green shoes. The gown isn’t groundbreaking, but it’s glamorous and fits her well. The hair is a little sloppy, but inoffensive, and the cat-eye makeup looks great on her.

Is this the only outfit she owns? I swear to God, every time she’s not in a ball gown, she’s in this exact outfit. A skintight Victoria Beckham dress, usually with Atwood platfoms (this month in NYC, November in LA, last June in DC, and more) – we get it, Eva, Posh is your BFF. Does that mean you’re contractually obliged to wear her label to every non-black tie event from now until eternity?

She’s wearing a leotard under Cleopatra’s bathrobe. How the fuck am I supposed to react to that?

Tsk, tsk, Kylie. The fit and proportions on this thing are all wrong. That train is way too long, the cowl neck is a mess, the bodice doesn’t remotely fit, and it’s altogether just a jumble of shininess.

I can’t say I approve of Anna in yet another gauzy little nude dress, but at least she always fucking kills it when it comes to the accessories. The trendy nude pumps with the gold cap-toe and gold round clutch are terrific and bring a little metallic hardness to the girly, wispy dress. But she’s got to give up on these neutral tones – they always wash her out terribly.

Welcome to puberty, middle child from Modern Family! It’s not a gown for anyone but a thirteen-year-old, but she’s so lovely and adorable in it, you almost forget that it looks like shredded toilet paper.

I love the dress, the dramatic makeup, the slicked-back hair, and the earrings. But why, dear readers, why do these starlets insist on killing me with their dreadful shoe choices? What are those horrible things, and how can I make my eyes un-see them?

She gets points for wearing something interesting, but there are some significant problems here. The sequined straps and side cut-outs, the Victorian tablecloth-looking fabric, the stiff skirt, the platforms, that unreasonably large and shiny purse – she can pull off some of these strange elements, but all together it’s a bit of a mess.

But if that was a bit of a mess, this is a hot disaster. Or, rather, a lukewarm disaster. That wrinkled taupe dress is simply miserable, from the the shapeless silhouette to the crap hanging off her shoulder. To make matters worse, she added a mauve purse and nude sandals, all in increasing shades of disgusting. Top it all off with no makeup, no jewelry, and bedhead, and that’s supposed to be an outfit? I don’t fucking think so, Naomi.

Hasn’t this horrid jumpsuit trend died yet? The bodice actually looks great, as do the earrings, but the length of these pants is downright stupid and the platforms don’t quite work.

I don’t care if you’re J.Lo – you don’t get to dip Dorothy’s ruby slippers in gold, fashion a purse out of gold, and adorn your beyond skintight dress in a gold-lead pattern. Not when all of those golds clash with each other and the dress barely covers your ass.

I saw bloggers raving about this, but I can’t see anything besides lingerie when I look at this gown. Lingerie, a mismatched clutch, and hair and makeup like she came from running errands. Not remotely impressive.

Jesus, woman, it’s the Glamour awards, not the freaking Tonys. Was a dramatic royal blue Zac Posen gown really necessary? And can you please explain whatever the fuck is hanging from your earlobes? Seriously, Lea. Those things are hideous.

Sweetie, I think I speak for all of us when I say, PUT ‘EM AWAY. And throw out those shiny nude peep-toe platforms before I have a fucking conniption.

11 responses to The Week in Celebrity Fashion, Part 1