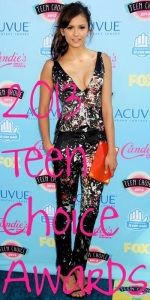 Let’s roll out the red carpet for our favorite teenaged starlets and see who falls flat on their face, dear readers!

I am fully obsessed with this splatter-paint print that was a staple of J. Mendel’s Pre-Fall 2013 collection. Ms. Dobrev made her fellow red carpet dwellers bow down to her fantastic top and matching ladypants. The best dressed women at events like the Teen Choice Awards are always the ones who don’t take themselves too seriously. This is no exception – Nina’s having a blast, and it’s hard not to love that.

I don’t love the length, and the matching navy purse and red shoes are a little too twee, even on someone as young as Hailee. But I love how fun and youthful this dress is, and the curly hair and dramatically smoky eyes are just gorgoeus.

This was my Resort 2014 red carpet prediction for Emma Watson. I don’t dislike it on Sandra Bullock, but it is a little disappointing when I think of how much harder Emma would have rocked it.

The colored stripes on this little black dress is just terrific – a very similar Christopher Kane dress was one of my Resort 2014 red carpet predictions for Hailee Steinfeld. The neckline and shoulders are particularly lovely, but the styling is a little bit too plain.

She pulls it off, because she’s Kerry fucking Washington and there’s very little she can’t make look good, especially with those shoes. But are there lollipops attached to this dress? Because I just can’t stand for that.

By far my favorite thing Lea has worn in quite awhile. She skipped the red carpet (appropriate, and probably necessary to avoid constant paparazzi questions about Cory) and gave a heartfelt acceptance speech about Cory that made me weep my fucking face off. AND we can’t see her sternum. So this is definitely a win.

I want to like this, but those puffy sleeves are just killing me, and the shoes are just sad. And for some reason, she was not the only starlet to don Fausto Puglisi’s palm tree print at the event:

At first I was pretty convinced this was a great look, and then I saw the little balls on her shoulders.  What the fuck ARE those things? And who allowed her to be photographed wearing them?

Lucy could have put a little more effort in and had a little more fun with her outfit. But Darren’s olive green suit is delicious, and his man-Louboutins are to die for.

I had to google Shay to discover she’s only 26, and thus there is no reason for her to be dressed like a 50-year-old trying to reclaim her glory days. Oh, and those shoes just look kind of tacky.

Another twenty-something whose jumpsuit and drag queen makeup age her at least thirty years. Do all these women’s stylists hate them, or are they just not famous enough to have good stylists yet?

Way too much makeup, and even a kindergartener would look at that dress and go, “It’s a little youthful, no?”

I don’t hate the skirt, but this is so boring and expected and all-around unremarkable.

The dress is tacky and unimpressive, and the ivory purse with the white shoes is actually destroying my will to live.

Amber, your hair is awesome, your necklace is fabulous, and I don’t dislike your dress. But the stripper heels have got to GO.

Oof. Honey. I don’t know who told you this was your color, but they were sorely mistaken.

Listen, Naya, if I had your abs, I’d be loathe to hide them as well. But if you’re going to wear nothing but a bra and pants, please make sure they’re not made out of Hefty bags.

I think the double slits are the worst thing to happen to fashion since Kim Kardashian, and the turquoise jewelry doesn’t work at all.

It’s not Anna’s fault – she thought this was the exotic ice dancing convention, not the Teen Choice Awards.

Nope. Miley knows I’ve been supporting her in many of her wild fashion ventures, but there’s nothing about this I like. Just go home and think about what you’ve done, child.