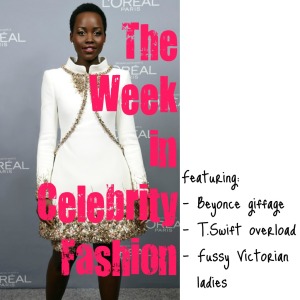 LUPITA NYONG‘O at the Glamour Women of the Year Awards
dress and shorts by Chanel, shoes by Kurt Geiger

Some things are too amazing to be described by the English language, so I will resort to my secondary language, which is Beyoncé gifs.

MINDY KALING at the Glamour Women of the Year Awards
dress by Salvador Perez, purse by Jimmy Choo

FUCK YES, MINDY. Welcome to the level of style you heartily deserve to be at. If Dr. Mindy Lahiri can always be in fabulous prints on The Mindy Project, real-life Mindy certainly should be dressing like the superstar she is. I love everything about this ensemble, from the color to the silhouette to the beading and embellishments. The metallic accessories tie things together nicely, and the bluish-metallic eye makeup is just the cherry on top of an absolutely delectable sundae.

Digging the shorter hair, which is still long-ish but so much more stylish and mature than the little-girly down-to-the-butt hair she’d been rocking for too many years. And j’-freakin’-adore this dress on her, which has everything I look for in a dress – gorgeous colors, a fun print, and POCKETS. The shoes are funky enough to counterbalance the girliness of the dress. It’s an all-around success.

First of all, if another episode of Scandal gets spoiled for me JUST VIA TRENDING TOPICS ON TWITTER, I am going to lose my goddamn mind. Not that that is Kerry Washington’s fault, I’m just mad about it and needed to vent. Also, this is beautiful and elegant and all things Kerry. The PVC shoes are excellent. Giant black-and-white florals aren’t my favorite print, but she definitely makes it work.

I’m usually opposed to white pumps this late in the season, but I actually don’t mind them with an otherwise-all white outfit. I just wish they were a little more “winter white” than “Wite-Out white.” Anyway, aside from the mismatched whites, I do love this outfit. But whatever bra or undergarment Nicole is wearing doesn’t work with the fabric of this dress.

The perfect dress for her. If she had worn literally any other shoe on earth, this would have shot to the top of my list (well, it might not have beaten Lupita’s outfit, but still). But those beige pumps just make me want to cry, they’re so depressing. I also kind of wish she had kept the bedazzled bike shorts that were shown on the runway, like Lupita did. I know at the time, everyone was all, “WHO THE FUCK IS WEARING CHANEL BIKE SHORTS,” but my answer was, and still is, “A-LISTERS.”

I think this is cute as hell, and I hate approximately 90% of what Tory Burch designs. But I would wear that sweater every goddamn day. And I like that she’s wearing the same Louboutins as Kerry Washington! And speaking of “co-ords” (that’s what the British fashion blogs are calling those matching top-and-skirt sets, and I think it’s cute, so go with it)…

Taylor Swift has basically LIVED in printed co-ords for the last six months. (See: Exhibit A; Exhibit B; Exhibit C.) This isn’t the cutest set I’ve seen her in, but it’s hard to go wrong in a matching crop top and skirt when you’re built like a flagpole. (I swear, there’s a compliment in there somewhere. Maybe. I don’t know, you guys, I think I’ve just reached peak Taylor Swift media overload and just can’t handle much more of her.)

It’s easily been years since the last time I saw Ms. Sevigny in anything that could be considered “normal.” So while this is less than amazing, congrats to Chloë on doing the most shocking thing imaginable – dressing like an average* fucking person.

*And by average, I of course mean tall, thin, beautiful, famous, and obscenely wealthy.

FREIDA PINTO at the Glamour Women of the Year Awards
dress by Jason Wu, purse by Salvatore Ferragamo

This Jason Wu number was one of my favorite looks from the Spring 2015 collections (it was actually my red carpet prediction for Kerry Washington). The color absolutely sings on Freida, but I can’t say the accessories work well with it. Actually, they don’t work with it at all. They’re under some sort of long-term unemployment situation.

In the post-Hathaway-backlash world we live in, I still find it difficult to give a shit about Anne’s fashion choices. I think I’d love this dress more if there were less of it – a lower neckline, a higher hemline, something to differentiate her from a fussy Victorian lady whose sleeves were ripped off of her gown.

Great color, gorgeous shape. Not totally sold on those boob coverings or the hair, but this royal blue velvet is a delight on Laverne.

Selena Gomez knows she’s not Cher, right? Or, like, Goldie Hawn? I’d be psyched to see a post-menopausal star in this suit, but I think even Selena’s grandmother isn’t old enough to pull this off.

It must be nice to have your job title be “professional poofy-dress wearer.” I highly doubt Jessica Alba has business cards, but if she did, they’d say “I look pretty for a living. But not like a model, because I don’t do that, or an actress, because I’ve barely been in a movie  in the last decade. I’m just, like… a professional pretty person.”

Trees? Are those trees on her dress? The one time she’s not in Dior, and she’s wearing TREES? I can’t. It’s not an unattractive look, per se – it’s just fucking dumb.

Gorgeous color, stunning cut-outs, but a column gown in particular should never be too long. And this is several FEET too long.

This would have been higher on the list if she hadn’t worn this gown constantly around a year or so ago. I understand that she’s probably excited to have that perfect post-baby body that only celebrities get, that enables her to wear the same tummy cut-outs she did before she had children, but still. Surprise me just a little bit more, Olivia.

ARIANA GRANDE at the MTV EMAs
gown by Cristiano Burani

And now, for a cheap knock-off of Olivia’s gown! Well, at least Ariana finally – FINALLY – lost that goddamn high ponytail. I’m thankful for that, if nothing else.

Well, she’s looked virtually flawless for basically the last two years, nonstop. It had to end sometime, right? It’s almost comforting to know that even someone as perfect as Kiernan has an off day once in a blue moon. It makes me sad to say anything less than “OHMIGOD I WANT EVERYTHING SHE’S WEARING RIGHT FUCKING NOW,” but… this is a big ol’ mess.

ASHLEY BENSON at the Baby2Baby Gala
gown by Emilio Pucci

Ashley’s clearly been on a month-long better and simply thought she was at a fancy Halloween party. There is no other plausible explanation for this dress.