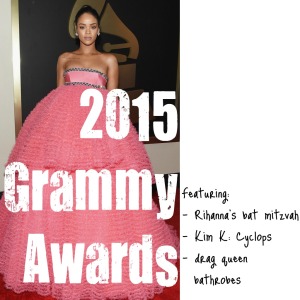 Good LORD, do we have some judging to do.
Best Dressed: RIHANNA
gown by Giambattista Valli

Love it or hate it, this was the only thing besides Kanye pulling a Kanye that anybody could talk about. Every other music star we can count on to bring the drama – Bey, Miley, Gaga, Katy – wore something sadly underwhelming. No one showed up in a statement-making look except Rihanna. And for that, I congratulate her.

Or maybe I just like it because I wore basically the same thing to my bat mitzvah.

Of all the people to WORK IT OUT on this red carpet, I can’t say I expected the HAIM ladies to blow so many more experienced starlets out of the water. These clothes are tailored FLAWLESSLY, and every outfit is the perfect combination of effort and “who gives a fuck.” I live for a good lady-pant, and there’s no better place to pull one out than the Grammys.

This has Grammys written all over it, and Rita has never looked like more of a superstar.

Obsessed with this plaid. Less in love with the buttoned-up shirt and scary cult sneakers, but the suit is so good I can’t quite bring myself to care.

More awesome lady-pants. God, that tuxedo jacket is heavenly. And her hair looks particularly Disney-princessy. Ugh, I just want to marry this girl.

I was skeptical on television, but the fact that Pharrell’s outfit was made of reflective material meant that it was gray on TV and white in photographs, and I kind of love that. And while I hated it that time he wore shorts to the Oscars, I think the Grammys are the right place to whip out those man-calves and show off those fucking fabulous shoes. As for Pharrell’s wife: I’d make fun of her, but she was clearly game to go in on matching outfits with her man, and I for one find that adorable.

Only ranked this high because, let’s face it, the fashion at this event mostly sucked balls.

From the forehead-down, this is everything I could have wanted and more. But those braids… my lord. The hair that launched a thousand memes. I just can’t even look at it without cringing.

Is he wearing fishnet slippers? I hope so.

There’s nothing wrong with this, necessarily, but it’s KATY PERRY. I know this was the World’s Most Somber Grammys, but jeez, were they not even allowed to have fun on the red carpet? This just emphasizes why I found Rihanna’s dress so mind-blowing – so few people seemed to be enjoying themselves in any way until Ri showed up.

Perfect for the Oscars, but again, she could have had a hell of a lot more fun than this if she’d gone for a print or a color.

Fire your makeup artist, Meghan. I’ll take care of hunting down the person who invented the sheer-gown-over-a-mini-dress trend.

This is painfully dull, and if there’s anything Miley Cyrus should never be, it’s dull.

Aggressively hideous, like almost everything Zendaya wears. I’ll give her points for the lipstick and the rings, though. All gorgeous.

Cyclops in a drag queen’s bathrobe.

Please excuse Madonna, as she is just stopping by the Grammys on her way to an 18th-century-Spain-themed production of The Rocky Horror Picture Show.