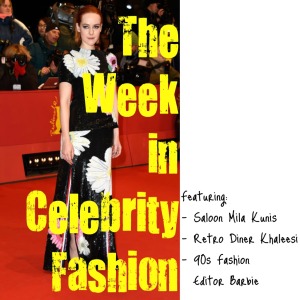 I have internet again! Let the celebrations begin!

I don’t even remember what my life was like before Jena Malone came in and blew the lid off the entire fucking universe. All other celebrities: take note. And bow down.

In case you were wondering, yes, Kiernan Shipka is still the world’s most perfect human.

Fantastic, and not just because kidnapped-prisoner-in-an-unwashed-wine-cardigan is the only Olivia Pope I’ve seen lately. Also, can we talk about those shoes? GREATEST.

This Audrey Hepburn-looking motherfucker has gone from “wait, which one is she again?” to “OMG #OBSESSED” in the blink of an eye. She usually goes for solid colors and structure, but I’m loving this take on soft, ethereal florals.

This has maybe a few too many design elements happening, and similarly, the shoes have at least one too many straps. But she’s just so cute, I want to keep her in my pocket.

Julianne Moore wore my red carpet prediction for her! The runway version had sheer sleeves, but otherwise, it’s the same dress, so I will add this to my shining list of blogging accomplishments. Now I have indisputable proof that Jennifer Lawrence, Amanda Seyfried, and Julianne Moore all take their fashion cues from the Democracy Diva.

I miss Michelle Williams on the red carpet. Sure, her hipster-twee thing got exhausting after awhile, but she at least knew how to keep things interesting. This dress is perfect for her, though I think the toe-wraps on those shoes are kind of hideous. And I really, really hate that particular shade of platinum on her. There’s a greenish tinge that’s just making me vaguely nauseous.

Yeah, you definitely have to be Jennifer Connelly to pull this off. Don’t try this at home, dear readers.

Putting my stupidly-gigantic obsession with all things Khaleesi, this isn’t particularly awesome. She’s wearing those same weird toe-grabbing sandals as Michelle Williams, and this outfit seems more like a uniform for a retro diner than anything else.

Corsets and hoop skirts? Let’s all follow Mila to the nearest old-timey saloon!

I’d be able to handle the dress under normal circumstances (though I have a strong “fringe makes me cringe” prejudice against it). BUT REALLY YOU GUYS WTF IS HAPPENING ON HER HEAD.

A big bag of meh.

The hair and makeup are dated and severe, the dress is dull, and the pant leg is the worst kind of surprise.

I’m generally quite supportive of Dianna Agron, and power-clashing, and stockings, and Mary Janes, but this is aggressively hideous.

Have two people in the history of the universe ever had LESS chemistry than these two? Forget about seeming like they like each other – they don’t even seem like they recognize each other’s species. These poor bastards. I’d feel bad for them if they weren’t the ACTUAL WORST.

2 responses to The Week in Celebrity Fashion