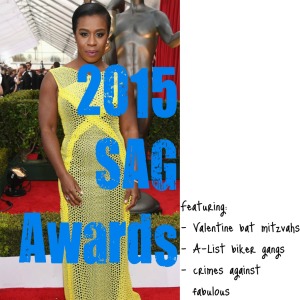 Welcome back to the SAG Awards, fellow judgmental bitches!

NO WORDS. ONLY GIFS.

Lovely on an epic scale. Those shoulders are just divine, and the earrings are probably being protected by three armed security guards but it’s worth it because they’re AWESOME.

A simple gown, but not a boring one. Not when Viola Davis brings all this fucking glamour to the table. She looks incredible. Also, How to Get Away With Murder returns tonight which means it’s shameless plug time! Join the snarky party.

That color is simply perfect on her, and the silhouette says “look how gorgeous and glowing with magical pregnant powers I am.” And that’s obviously a good thing.

Loving every bit of this. Christian Siriano dressed half the cast of Orange is the New Black, and made nearly every one of them look like an A-lister. It was an impressive showing over, and Taystee in particular tore it up.

The color of the gown is exquisite and the sparkle to it is lovely. But I can’t help but feel it’s a teensy bit predictable. The stunning necklace helps, but the center-parted hair does not.

I am all kinds of obsessed with this Oscar de la Renta dream of a gown, but I wish it were just a bit shorter. And it really calls for a better hairstyle than whatever Tatiana’s working with here.

I’ve been staring at this picture for days and I still can’t figure out if it’s straight-up ugly or strangely enchanting. Thoughts?

Ugh, whatever. Call me when you wear a color.

I think this neckline is kind of awkward, and the skirt is cheap-looking. Sorry, darling. Try again next year.

No. This is what Kiernan Shipka should be wearing to the SAG Awards, not Julie Bowen. Also, what is happening on top of her head?

Equally lovely; equally unremarkable. Ugh, come ON, funny ladies that I worship. Try just a little harder to surprise me.

This is what you wear when your bat mitzvah falls on Valentine’s Day.

Brienne of Tarth is serving up 1920s fierceness from the neck-up like nothing I’ve ever seen before. But this dress was clearly destroyed in a vicious battle moments before she took to the red carpet. Everything below her waist is just an explosion of awkward seams and wrinkles.

I love a good suit on the red carpet. However, this is not a good suit. This looks like Julia Roberts just took off her biker helmet, having stolen all those tacky turquoise jewels from a rival gang of 90s-A-listers-turned-bikers. (Their leader is Elizabeth Hurley.)

Did she put this on backwards? How is it possible that a Vivienne Westwood dress is draped this terribly? Someone needs to get fired for this.

Oh, EDITH. This is just so… EDITH.

I love Laverne Cox SO MUCH, but this is an utter disaster. The monsters who did this to Ms. Cox should be arrested for crimes against fabulous.