There is nothing about this that I do not love. Except that she failed to arrive encased in a giant egg. (Remember that? Good times.) Also, to sit in the audience, she just took off the giant skirt and wore the lace catsuit. Because she’s Gaga, and she is one of maybe five people on earth who can get away with that kind of move.

Let’s not forget about the khaleesi hair: 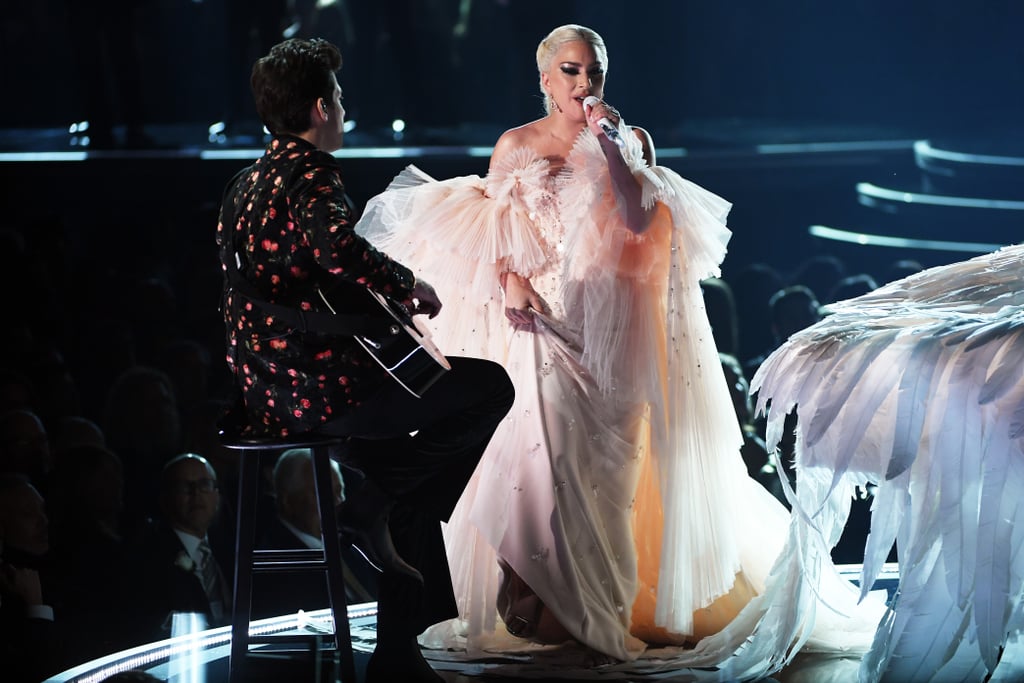 Such a killer performance. When she laid down on that piano with the angel wings behind her, I think I actually found Jesus. And I’m Jewish, so that’s a pretty big deal.

Fan-fucking-tastic. Not that I don’t like a good naked dress, but I LOVE that the Grammys have gone from all-skin, all-the-time, to “how can I wear a suit, but like, FUN?”

Don’t worry, she’s not just being extra by carrying a white rose as an accessory. Most of the attendees wore white roses as an homage to #TimesUp, and I wholeheartedly approve. Also, while I totally understand why a child star would need to go through an insane fashion phase as soon as she’s released from her Disney contract, I’m SO happy we’re onto this new, mature phase in Miley’s style journey. It’s not boring or dull or matronly – see: the cut-out and the glittery heels – but it’s a decidedly grown-up version of Ms. Cyrus. And I dig it.

This version of Miley was not THAT long ago, my friends. My jaw DROPPED when she hit the stage in this ball gown which I can only describe as presidential-inauguration-chic. (But, like, in a real presidency.)

This is the archetypal great Grammys look. Sexy, sparkly, and anything but boring. And, again, I’m so happy it’s a suit. MORE LADY PANTS ON THE RED CARPET. ALL THE TIME. ALWAYS. And men in skirts, for that matter. It’s 2018. We eat ass now, grandpa.

This is gorgeous, but those socks are a distraction. I love a good silly sock, but he should’ve let the stunning pink suit shine on its own.

The hat is phenomenal and the velvet is just luxurious. But let’s not go crazy with the praise and pretend this dress is something new and spectacular for our queen, OK?

Chrissy is HEAVEN in this damn thing. John could stand to take a fashion risk once in a super blue blood moon. #topical

She skipped the red carpet, but looked killer in this performance outfit. And I don’t think I’ve ever seen anything as joyful as Rihanna in stocking-ed feet, clearly having a goddamn BLAST backstage. I can’t look at this and not break into a huge shit-eating grin.

It looks a lot like every other Vivienne Westwood dress we’ve seen on the red carpet, and the classic red color is also a little too ordinary for a Grammys lewk. But her disco-ball purse is the cutest.

I’d like to borrow that jacket. And not just because it doesn’t really make any sense at this event. A Sundance film festival premiere? Sure. The Grammys? No, baby.

Honestly, it’s not my fave, I’m just thrilled to see her in a color. Digging her nerdy boyfriend’s suit, tho.

A pantsuit in a grandma’s-couch floral? Only Cyndi could pull this thing off.

La Perla is a fancy lingerie company that has recently semi-transitioned into making actual clothing. Not that I’m sure this qualifies as clothing, but, the intent is there. Regardless, I can’t forgive whatever’s happening on her boobs.

It’s cute that she thought she could pull off that hair.

The thing about pulling off a 90s look on the red carpet is, you have to do SOMETHING to update it. Makeup, hair, jewelry, shoes, something so that people can actually understand that you’re doing an homage to an earlier decade. This? This is just sad cheap off-brand not-quite-Daria, not-quite-My So-Called Life nonsense. Sarah’s face hasn’t aged a day in twenty years, but I wish her fashion sense had.