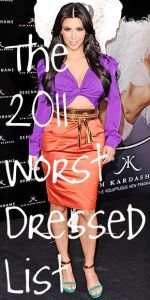 What, you thought I was just going to give you the fabulous and none of the fugly from 2011?

It was a beautiful year for red carpet fashion, but let’s talk about those whose outfits made us gag, rather than swoon. Without further ado, here is your 2011 Worst Dressed List.

A pre-pregnancy Bey wore a yellow mesh fringed long-sleeved shirt – with thumb hooks – and no pants. No matter how much you worship this woman, you can’t try and tell me that this is acceptable.

EMMA ROBERTS
Bustier and leggings by Versace for H&M

I swear, my dreams are haunted by this print and those terrible, terrible shoes. Some people have the nightmare that they’re naked in public – I have nightmares that I’m wearing THIS in public.

I’m thinking of starting some sort of fashion rehab for starlets addicted to hideous, thigh-and-cleavage-squeezing-and-baring dresses. These programs will be tailored to the individual star’s needs: Demi here will clearly require a seminar on blotting your lipstick and choosing a weave that doesn’t look like a dead animal.

At Democracy Diva’s Fashion Rehab, Lindsay will attend a class on Bra-Wearing 102: It’s Not Just for Real Breasts! She’ll also be guest lecturer for a program called Giant Sunglasses, or How to Hide Your Meth Face.

Sadly, Christina Aguilera will not be attending Fashion Rehab . . . but this drag queen impersonator of her will!

In a multidisciplinary study on Fame Whoring, Kim will teach her peers how to hire yes-men stylists who will tell you you’re fabulous even when the dress you’re wearing pinches and poofs your belly into a pudgy pillow of disaster.

Big Bird was invited to join the staff of Democracy Diva’s Fashion Rehab, but he declined when he found out Rihanna, one of our patients, stole his favorite gay clubbing outfit.

The only woman to make it on both my Best Dressed and Worst Dressed lists, Gaga proved that even the most stylish, fashion-forward stars can sometimes succumb to dressing like giant merkins at a leather/bondage convention.

Thank God she’s wearing that mask, because I really, REALLY don’t want to catch whatever the fuck Nicki Minaj has.