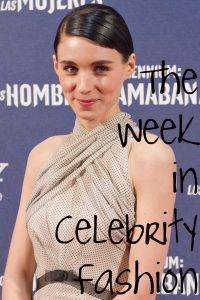 It’s the first weekly fashion recap of the new year!

ROONEY MARA at the Paris premiere of The Girl with the Dragon Tattoo // dress by Louis Vuitton, shoes by Givenchy

This week was dominated by one starlet and one starlet only: the titular Girl with the Dragon Tattoo.  The Audrey Hepburn comparisons are almost too easy to make, with her short, jet black hair, angular features, and stunning black dress. I get that she’s working the mysterious thing, and I personally find it kind of refreshing to see someone with a strong sense of style (or a killer goth-chic stylist). But I also wouldn’t mind a smile and a better pedicure, darling, even if the dress is a winner.

At first I wasn’t a fan. The color looked a little weird and the bodice fits or lays kind of funny. But I loved the overall elegance of the gown and the contrasting hemline. However, a close-up totally transformed the look for me:

It’s not a dingy color – it’s miniscule little polka dots! I LOVE, LOVE, LOVE it. It’s quirky and retro, but the gown is modern and romantic. The natural makeup is flattering, and the beauty of the dress up close made this my favorite look of the week.

I’m not a huge fan of black tights under a black skirt with black shoes. I think it reads a little stuffy and uptight, and it usually makes stars look like they don’t have feet. But god damn, if that isn’t one beautiful jacket.

ROONEY MARA at the Berlin premiere of The Girl with the Dragon Tattoo // gown by Michael Kors, shoes by Nicholas Kirkwood

This gown premiered only a few weeks ago in Michael Kors’s Pre-Fall 2012 collection, but I’m so glad Rooney was the first to get her hands on it. While it’s a gown that any number of starlets would look great in, Rooney makes it look interesting, and that’s not something everybody can do. Love the little head wrap, but I think she could have done with a little more styling than just black peep-toes pumps.

I’ve read a lot of hate for this look already, but I say if you have the body for it, and it’s event-appropriate, why not? The skirt is gorgeous, the top is flattering, if a little too sports bra-like, and her figure looks fantastic. She’s also got a knack for showing skin without looking vulgar – the low-key makeup once again helps. And the shoes were a beautiful choice. Three cheers for a week of hardcore fabulous from Rooney Mara. Now let’s move on.

I wish my bedazzled ski mask had a cut-out for my bangs and ponytail! So jealous of Lady Gaga. That bitch has everything.

I’m weeping at the thought of that beautiful coat TOUCHING THE STREET – Gaga, don’t pretend you don’t have enough gay bodyguards to carry your train for you! But otherwise, I’m in love. The white mega-platform Louboutins are fucking fantastic, and you know I love a good bejeweled stocking. Love the old Hollywood hair and makeup with the massive movie star sunglasses.

Well, this certainly bodes well for 2012 – it might be the end of the world, but at least we got to see Lady Gaga dressed as The Phantom of the Disco Drag Queen Opera.

Definitely not one of my favorites. The suit is so stiff-looking and ill-fitting: a suit like this isn’t meant to be worn skintight. The amount of gold is actually an eyesore, and those bangs? Gaga, I know you’re as free as your hair, but nobody wants to be anything like THAT hair.

Again, I could go for a bolder shoe choice than black peep-toe pumps, but I love, love, love this little dress on her. Perfect match of star to designer.

FLORENCE WELCH in London // gown and cape by Chanel

Florence, I love you, but giant gray capes make you look like some sort of terrifying Eskimo cave woman.

I was in Bloomingdale’s with my mother this week, and I marveled over a Tahari suit with a two-tone lapel that she showed me. I’d never seen a collar like that before, so I’m thrilled to find Darren Criss rocking the same awesome look. It’s a lot of look, but what else should a total ham making his Broadway premiere wear?

RACHEL WEISZ and DANIEL CRAIG at the Madrid premiere of The Girl with the Dragon Tattoo // dress by Alexander McQueen, purse and shoes by Roger Vivier

They make quite a fashionable pair, don’t they? He is all kinds of delicious in his taupish-tan suit – love the brown shoes. And her dress is just all kinds of fabulous. Her hair could use a little TLC, but I love that she let the McQueen do all the work and paired it with black accessories.

No. You don’t get to wear black stockings with those shoes unless you’re a six-year-old in her mother’s closet. The coat is beautiful, endlessly fabulous, but that haircut isn’t doing it any favors.

A classic example of how to ruin a great dress with bad styling. That lipstick is all wrong for Emily and for the shade of this dress, and the dark nails and toes don’t work well with her coloring. The hair should be down to soften up the geometric dress. The purse is too busy and the shoes were just such an arbitrary choice.

It’s more of a 1920s costume than a stylish nod to the flapper era, but she certainly looks beautiful. I wouldn’t recommend that amount of metallic silver on anyone, though, even if the purse and dress are both beautiful.

Kristen, I hate to tell you this, but I think you forgot your ice skates.

Wear a bra, lose the sleeves, and don’t even get me started on the dead animal on top of Rihanna’s head.

I’m convinced this is a wax sculpture of Fergie and not the real thing. Nobody can really be THIS shiny, right? I just don’t think it’s humanely possible. She looks like Carmen Electra and C3PO had a weird robot-stripper baby.

You are so much better than this outfit, Kristen. And if you want Bridesmaids to really get some consideration, consider hiring a stylist and hitting every red carpet in town. You’d be amazed what it can do for a film.  To start, please eliminate all capes and high-waisted harem pants from your wardrobe immediately. Then we can have a conversation about that bun on top of your head, and maybe have you consider a lipstick that isn’t meant for a tween girl.

4 responses to The Week in Celebrity Fashion