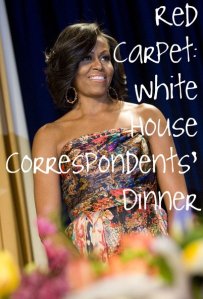 I am so sad there are no full-length pictures to be found of Michelle Obama, since it’s kind of unseemly for a First Lady to strut down the red carpet with Kim Kardashian. And I respect that – lord knows if I were Michelle Obama, I’d steer clear of the black hole of bullshit and sad, sad desperation that is the Kardashian family. (Actually, that desire isn’t exclusive to First Ladies.) But the 21st century Jackie O looked so goddamn beautiful in her printed Naeem Khan gown that I had to weep a few tears for the lack of photos of this full-length gown (which was my Fall 2011 red carpet prediction for Zoe Saldana).

Being a feminist, and a person with immense student loan debt, and just a human being with a pulse, I worry about America a lot these days. But honestly, I look at our brilliant and beautiful, classy and glamorous, successful and confident First Lady, and it makes me feel a little bit better about the state of the world. Even if Lindsay Lohan is sitting six tables away.

Dakota! Look at you, you fabulous thing! Note the marvelousness of this particular gown on this particular starlet. Underage stars seem desperate to wear full-length gowns best suited for ladies decades older for them, and it’s understandable, when they’re trying to bridge the gap between child star and serious performer. Dakota’s seventeen, but she’s been in this business FOREVER, and I wouldn’t still want to be wearing cute little party dresses either. But she managed to modernize and youth-ize (I almost wrote “youthenize,” but that’s really, really not what I meant) her grown-up gown. And I mean, there can’t be a span of more than a couple years when you can wear a full-length, long-sleeved gown with a keyhole cut-out, right? So kudos to Ms. Fanning, the rare teenager in Hollywood who can give us elegance and youth and glamour all at once. (Lose the shoes, though, sweetheart.)

It’s a beautiful dress, but I’d love to see how it looks on a person instead of a clothes hanger.

God bless Elizabeth Banks. Ever since the Hunger Games press tour, she’s displayed quite a knack for always looking classically beautiful while maintaining a modern and ceaselessly event-appropriate style. Case in point: Her red gown. It’s on-trend (the ubiquitous peplum, but a subtle one), it’s a great color for her, and it’s formal enough to wear to meet the President, yet fabulous and fun enough for cocktails with Leslie Mann (who we’ll get to in a bit).

Ivanka couldn’t let the First Lady be the only one to rock a Naeem Khan gown from the Fall 2011 collection – this one was my red carpet prediction for Eva Longoria. The shoes aren’t my favorite, but she looks statuesque and sexy as hell.

It’s a great color on her, and her hair and makeup are simply lovely. But that is a WHOLE lot of dress, Viola. A woman as fierce as you doesn’t need this much shiny fabric to draw every eye in the room.

The blogosphere raved and raved over this, which I couldn’t understand – it’s a lovely gown, of course, but let’s not pretend long-sleeved sequined gowns are a new invention. The makeup is much more chic than usual, and the purse is cute, but I’m over the topknot hairdo.

Apparently, Naeem Khan was the go-to designer for this particular event. I think it’s because of the label’s gorgeous-but-not-overtly-sexy appeal: perfect for nerd prom. The proportions and fit are a little off – she’s so petite, a train like that overwhelms her and makes her legs look shorter – but I think the gown is lovely.

I thought this was kind of dull, but apparently Anna’s pregnant, which means a draped, comfortable, fabulous gown in a slimming shade is probably all she wants to wear right now. And I can’t fault her, because damn, does she look good doing it.

Oh, please. You can see the ratty, unfinished hemline and the strands of fabric very not-purposefully falling apart before your very eyes. I don’t give a shit how organic or inexpensive or interesting or innovative your gown is. If the hemline can’t hold together for the length of a red carpet, it ain’t worth shit.

I rarely say this to starlets, but she might actually need to go DOWN a size in that dress. She’s kind of swimming in it, and minimalist gowns like this only work when they’re perfectly fit. I think the purse is beyond tacky and the lipstick is worse, but the color is way better on Kerry than it was on Emma Stone at the 2011 Golden Globes.

We’ve seen thousands of this pretending-I’m-naked-under-this-lace thing, and this is probably the least impressive incarnation. Not flattering, not sexy, and all-around dull.

Nothing wrong with this, except it seems to be the only thing Julie Bowen wears, ever.

Well, it’s not a skintight strapless mermaid gown, so, that’s a victory. But the platforms are silly, and I have never once approved of her earrings/bracelet combination on the red carpet. She just always looks so over-accessorized to me.

Rashida, you are so much better than this dress. Call me, and you and Amy Poehler and I can go shopping and live out all my fantasties of being best friends with Leslie Knope, and I’ll get both you funny, gorgeous ladies into gowns that actually work for you.

Anna Paquin wasn’t the only pregnant star to whip out a sexy, breezy black gown – Reese followed suit. But all those criss-crossing straps aren’t very aesthetically pleasing, and the hair/makeup/earrings look like they belong with a totally different outfit.

How is she still getting invited to things?

Rosario, I am sure that your breast enhancement surgery was expensive and painful, so I can understand your desire to get your money’s worth. However, your chest is indistinguishable from that of a Barbie doll, and that is certainly not a compliment. Furthermore, this dress? It is not your friend in any way. This “we’re off to see the Wizard!” green is all wrong for you, it’s at least a size too small, and the shiny fabric combined with all those busy elements on the bodice make for one hot mess of a dress.

She’s useless and the dress is worse, but once I realized those were two-tone shoes (nude and black, very subtle), I kind of fell in love with them.

Seriously? This is Kate Upton? I’m sorry, but I really don’t see what the fuss is about. Darling, there’s no need to wear your bathrobe to meet the President. It’s not Bill Clinton, after all.

No, Claire. No. This is not a dress. This is a wrinkled satin bedsheet, and that lipstick makes you look like a French prostitute.

Once again, I’m mystified by the poor fit, the shiny fabric, and the fact that this satin looks like it was beat with a rock before Lindsay hit the red carpet. But, considering it’s Lindsay Lohan – well, she’s looked worse, right?

Based on your expression, Zooey, you clearly believe that wearing a dishwater-gray shower curtain that’s a foot too long on you is simply ADORABLE (and no, I will not add a “K” to that word, not if you paid me – unless it’s a lot of money, in which case, let’s talk because I’ve got loans to pay off). I am here to tell you that you are wrong, and that this is hideous, and I beseech you to hire a stylist. A gay one. Who doesn’t give a fuck about what you think. Trust me – they’re the best judges.