Beware the ides of March, dear readers.  The fiercest fashion battles are known to happen today.

MICHELLE: Carey, you’re positively darling, and a wonderful actress. But your wardrobe is just too boring to compete with mine.

CAREY: It’s classic, not boring. And you’re not exactly reinventing the fashion wheel yourself, Michelle. 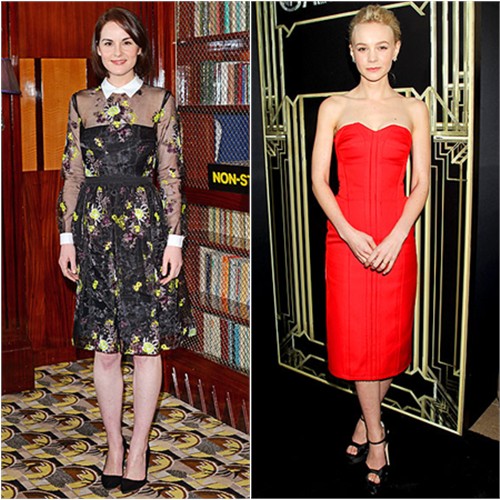 MICHELLE: At least I have a bit of fun with my personal style. Is this the only dress you’ve worn this year that isn’t black or white?

CAREY: Who knew a stuck-up princess like Lady Mary could be so sassy about monochromatic clothing? 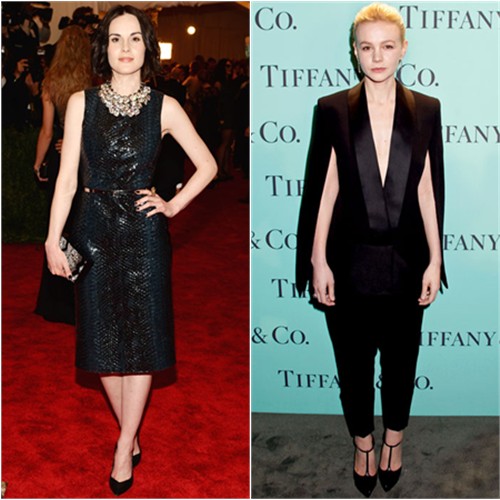 MICHELLE: First of all, Lady Mary is not a princess. She’s a Lady. IT’S RIGHT THERE IN HER NAME. And second, I have no problem with monochromatics, as long as you wear them in an interesting way.

CAREY: And my little tuxedo isn’t interesting enough for you? Posh Spice designed it; what more could you want?

MICHELLE: Well, you could consider styling your hair or putting on some makeup when under the harsh bright lights of the cameras. It would help you avoid looking like a corpse.

CAREY: But corpse-chic is in this year! Everyone says so!

CAREY: Whatever. I’m wearing lipstick. Can you leave me alone now? 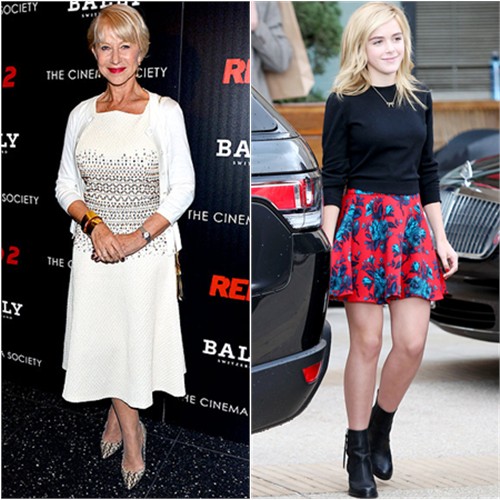 HELEN: Alright, sweetheart. I’m the oldest March Fabness competitor; you’re the youngest. I’m sure you think that gives you some sort of advantage, but –

KIERNAN: OMG, Helen! Did you know you’re fifty-four years older than me? That’s like, an entire already-old-person older than me! 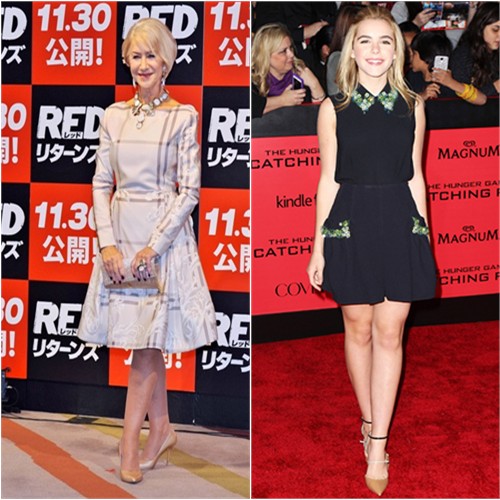 KIERNAN: Do you know that means you were my age – fourteen – in 1959?! That’s before the first season of Mad Men is set! That’s like, literally ancient history!

HELEN: Well, I suppose to someone as young as you, it might seem –

KIERNAN: So, like, I play a 1960s kid on TV, and if Sally Draper grew up and like still existed now, YOU’D STILL BE OLDER THAN HER!

HELEN: Yes. I understand how math works. Now please, would you kindly shut the fuck up about our age gap?

KIERNAN: You brought it up! I’m just sharing fun facts!

HELEN: Yes, well, I think we’ve had enough “sharing” and “fun” for one day.

KIERNAN: Ugh. Whatever. I’m over this. You’re old and mean.

ASHLEY: ZOMG OLIVIA POPE IS PREGNANT!!!!!! Is that a Fitz baby, or a Jake Ballard baby? PLEASE SAY JAKE BALLARD.

KERRY: … What the fuck is wrong with you?

ASHLEY: I just fucking love Scandal! I want to be a white-hat-wearing gladiator too!

KERRY: Um, okay. But Olivia Pope isn’t pregnant – I am. 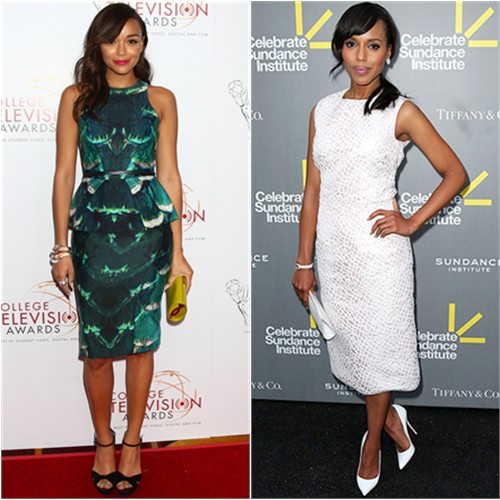 ASHLEY: Is that, like, a riddle? Am I supposed to hack into some CIA files to figure out what that means? Is the head of B-613 even allowed to have a baby? PLEASE TELL ME IT’S JAKE’S.

KERRY: I don’t even know how to talk to you. 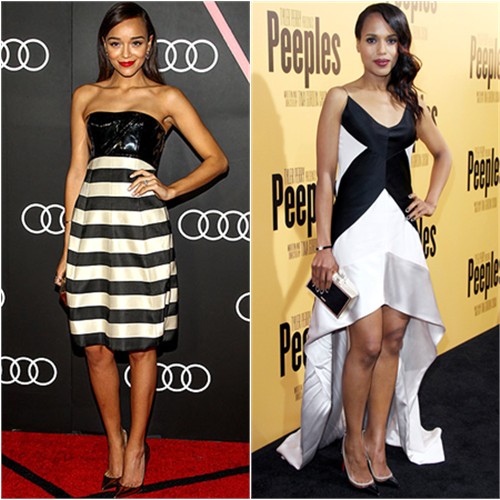 ASHLEY: You should just know that Fitz is the fucking worst, his Vermont dreams are bullshit, and you should obviously have this baby with the super-sexy Jake Ballard.

KERRY: Fine. Whatever. Are we done yet?

ASHLEY: You can’t really expect me to believe you’re not Olivia pope. You’re wearing white. That’s like, her signature color.

KERRY: Yeah, she’s definitely the only woman on the planet who wears white, you fucking moron. I think we’re done here.

OLIVIA: I must say, it’s a relief to be up against a fashionista who even comes close to matching my level of fabulousness. I know it’s only Round 2, but there are still far too many basic bitches here for my liking.

ZOE: Oh, that’s funny. I actually think you are one of those basic bitches. But it’s absolutely adorable that you consider us equals, Olivia, it really is. 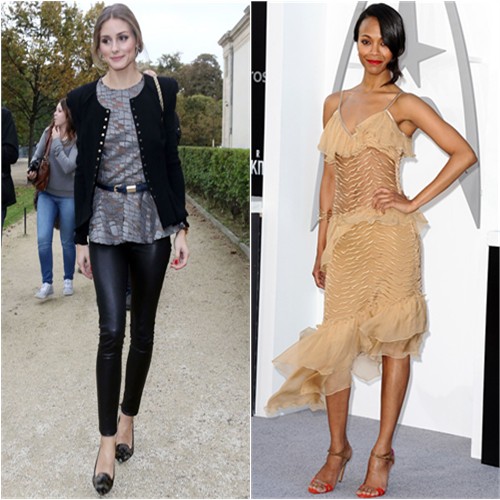 OLIVIA: Me? Basic? Have you even met me? I’m front row at basically every major fashion show, every single season. Who the fuck are you?

ZOE: I’m a fucking movie star. Which is a hell of a lot more than I can say for you.

OLIVIA: What, you think a few major blockbuster hits will make us forget that you were in Crossroads with Britney Spears? WE WILL NEVER FORGET.

ZOE: I will never be able to live that shit down. Listen, it was 2002, I hadn’t done much since Center Stage, and I needed a fucking job, okay? And clearly, it didn’t ruin me, since I’m way more famous now than I was back then.

OLIVIA: Crossroads might not have ruined you, but it certainly ruined all of us who had to watch it.

ZOE: I take no responsibility for that. Put that shit on Britney’s plate, not mine.

OLIVIA: Whatever. I guess it doesn’t matter, since I’ll be murdering your ass in this battle anyway.

ZOE: Oh, Olivia. I would simply love to see you try.

Respond to March Fabness 2014, Round 2: Prada and Versace Brackets