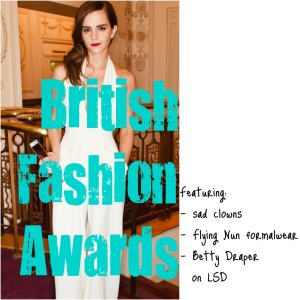 Though I adore virtually everything about this jacket, I did feel this was a tad matronly for Emma Watson, who took home the British Style Award at this event. But when the jacket came off:

Effortlessly fabulous. The pans could have been hemmed ever so slightly, but fuck it, I still love this.

I didn’t know that serving up botanical realness was a thing until Michelle Dockery schooled me on it via this outfit. A mere mortal would look like she was being strangled by a carnivorous plant, but Lady Mary pulls it off with grace.

This color is a motherfucking statement, and I love it. The almost-but-not-quite matching shoes and lips are to die for. And the silhouette is interesting and fresh. Only a few stars really pulled out all the stops for this event, but Karolina was undoubtedly one of them.

I mean, come on. They’re as perfect as they ever were, and will continue to be perfect always.

Surprisingly chic and tasteful, particularly for anyone even remotely connected to the Kardashian clan. I actually respect Kendall’s ability to attend industry events in outfits that are very stylish, but don’t beg for attention.

I’ve called out a lot of similar looks in the past for being too boring, but something about this felt like a breath of fresh air to me. A billion shades of nude usually bore me to tears, but this was the perfect combination of colors to compliment Anna’s porcelain skin.

It’s a little too swingin’ 60s, in a costumey way, but it’s a little outside her wheelhouse, and I appreciate that.

A sexy cut-out little black dress is practically a required uniform for runway models at fashion events, so I can’t get too worked up over this. But she’s wearing the hell out of it, I’ll give her that much.

A flawless street style or dinner party outfit, but she looks a little too casual given that half the attendees are in formalwear. But this color is a fucking revelation on her.

It needs a good steaming, but it’s a damn gorgeous gown on an impossibly gorgeous woman. So you can’t go too far wrong with that.

It’s a shame, because if any of this had actually fit her, it would have been the biggest hit of the night. Unfortunately, the proportions are insane, and Ashley looks like she’s on stilts.

I’m thrilled to see she’s not wearing fringe, and even kept the accessories to a minimum, but I just think this is kind of forgettable. I do love the shoes, though.

Can someone tell me why Alexa was styled by blind Amish nurses for this event?

It’s too long, and the panels don’t hit at the right spot, so this ends up being really unflattering. Luckily, Cara is too stoned to have any fucks left to give.

Kylie Minogue apparently time-traveled here all the way from 1998, when baby-doll dresses and cheesy platforms were all the rage. Or she’s just in a Baby Spice costume. Either way, I’m concerned.

I have no problem with Rihanna wearing nothing but a jacket and stockings. In fact, I expect it. But can it please be a less bulky, rectangular jacket than this one? Again, another hugely missed opportunity. I get that it’s supposed to be boyfriend-sized, but it would look a hell of a lot more fashionable if it actually fit.

Yeah, I’m pretty sure that’s underwear. Also, we need to talk about that combover.

Perfect outfit for the Kids’ Choice Awards, but it feels really out of place amongst the London Fashion Bitch Extraordinaire aesthetic that most of the other attendees went for.

The fit isn’t perfect, and it’s kind of dull, but I didn’t hate it from the back… at least at first.

I was willing to accept this… and then I saw the dreaded tassel. I hate this so much more than I even could have imagined, dear readers. Why doesn’t she just wear a sign that says, “PULL THIS LEVER TO UNDRESS ME!”

Well, Lady Edith went and pulled a Lady Edith. This is like a bridesmaids’ worst nightmare come to life.

Betty Draper on LSD. And not in a good way.

Yes, we are aware that you have boobs.

When did Harry Styles make the transformation from teen idol to sad clown?