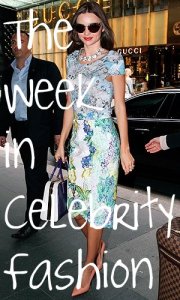 Welcome back, dear readers, to another fun-filled weekly fashion recap.

MIRANDA KERR in Sydney // top and skirt by Erdem, sunglasses by Miu Miu, purse by Prada

The top and skirt are heavenly; the prints are mismatched and the colors are different, but you can tell the same hand crafted them both, and it works beautifully. The purse is so fantastic I’m angry just looking at it, knowing it will never be in my hands. The shoes look like they came right off the set of Mad Men in the best possible way, and as always, she’s bejeweled to perfection. A toast to a day where we can all take a stroll through our hometowns in tens of thousands of dollars worth of designer fashion, dear readers.

This was my Fall 2012 red carpet prediction for Elle Fanning, but I am drooling over it anew on Gaga. The star-studded stockings and killer platform stilletos are quintessentially Gaga in the best possible way. The Lady had a lot of looks this week, but this delightful little dress deserved the top spot.

I’d punch a kitten in the face for that coat, no doubt about it, no questions asked.

LADY GAGA in Romania // dress and shoes by Moschino, belt by Chanel

It’s got a weird Minnie Mouse-meets-French maid vibe that I can’t quite understand, and the hat is throwing everything out of whack. But the belt and bejeweled neckline of the sweater (or perhaps it’s a necklace?) have an exquisite antique beauty to them.

I get that part of being Gaga is making a statement wherever you go, but it is TOO FUCKING HOT for all that fur in New York City in August, for God’s sake. Can she make a statement that isn’t giving me swamp ass just from looking at her?

LADY GAGA in Bulgaria // coat by Hermès, purse and shoes by Louis Vuitton

Gaga has tried many looks I’ve admired, but her newfound desire to look like a corrupt European president’s ex-wife leaves me completely dumbfounded. But I like her puppy.

Robert Pattinson made his first official appearance since Kristen Stewart’s little NuzzleGate incident, and he looked appropriately chic and bearded. His blue-gray Gucci suit is beyond terrific – in fact, it’s the most attractive I’ve found him since Harry Potter and the Goblet of Fire. If fashion is a view into someone’s mind (which it obviously is, because that makes everything more fun), I can state with confidence that Robert is doing just fine: he’s having lots of whiskey and cigars, a few late-night cry sessions in Reese Witherspoon’s hot tub, and a moderate amount of kinky rebound sex with foreign runway models who have never heard of Twilight. (Yes, I can tell all that from a Gucci suit! You’ll learn this and many more secrets in my book, which will be released several months after someone gives me a book offer.)

Yum, yum, YUM to that delicious green Lanvin dress. I just bought a pair of Joe’s skinny jeans in that forest green color; it’s my new obsession. The nude sandals were a lovely choice, and the cut and fit of the dress is just perfect for her.

The dress is almost too precious, but Kerry’s perfect legs and berry lips and dramatic cat-eye makeup are too delectable to resist. The shoes are nothing special, but the hair, makeup, jewelry, and attitude are enough to turn this into a great look.

My GOD, can this woman wear white. This draped Vivienne Westwood LWD is so perfect for her, it’s almost ridiculous. The coral earrings, the gold sandals, and the statement cocktail ring are all working for her.

Obsessed with the hair, but she may need to find a makeup artist who doesn’t moonlight as a drag queen. The Victoria Beckham dress is a delight on her (though I’d have probably hemmed it an inch or two). And though I love me some studded Louboutins, I think they’re a bit heavy for this outfit.

JESSICA PARÉ in Hollywood // dress and purse by Jason Wu

I love me some Megan Draper, particularly in Jason Wu, but I wish she’d gone a little more daring and a little less cutesy with her accessories. Put down the bedazzler and step away from the beads, Jessica, and invest in some pieces with a little more personality. While you’re at it, a darker lipstick wouldn’t be a bad idea.

Continue to be envious of Rachel Bilson’s easy-breezy California street style. She shines like no other during these summer months, with her endless supply of mixed-print sundresses, chic two-tone sandals, and adorable sunglasses.

Teenage mod chicness at its very best. The dress is the perfect sundress: great color, perfect length, loose and breathable, with a halter to show off your freckled shoulders, and POCKETS, because life is better with pockets. But it could so easily look ordinary, or worse, like a beach cover-up, if she had paired it with a boring pair of shoes. Instead, Ariel struck gold with those fabulous sandals, and it’s the most stylish look I’ve seen from her to date.

The dress is only okay, and the shoes don’t help the situation at all. That colorless nude is so depressing, and the very pointy platforms make her look like she’s wearing her mother’s shoes. And Ariel, don’t let your overeager makeup artists hide your pretty face!

Speaking of hiding your pretty face, can we TALK about this blue eyeshadow? Camilla Belle is ridonkulously stunning, but this makeup is so bad, I’m almost offended. Her Jason Wu dress is cute, but a little unexpectedly twee. The shiny blue purse was clearly an afterthought, and though the shoes are cute, they do little to mitigate the girliness of the dress. I’m being overly critical, because I think I’d actually come down on the side of liking this look if it weren’t for that goddamn eyeshadow.

That lipstick is terrible, the blue nail polish is worse, her flamenco dress barely fits, and those bracelets, while very fun, are borderline insane with this outfit. Pull yourself together, Jessica. You’re better than this.

Katniss, there are ways to display your fantastic ta-tas without looking like you’re wearing a swimsuit that doesn’t fit. This awkward dress has terrible proportions and does nothing for you, much like those bangs, and that makeup, now that we’re getting into it. And, seriously, Katniss, you’re the fucking Mockingjay. You can’t get a pair of Louboutins that fit properly? I simply refuse to believe it.

The number of times Lea Michele has appeared on the red carpet showing way too much sternum and/or (but usually and) sporting a vag-high slit is approaching infinity, dear readers. Or at least, I’m so exhausted of redundant wardrobe, it’s starting to feel that way to me.

3 responses to The Week in Celebrity Fashion, Part 1