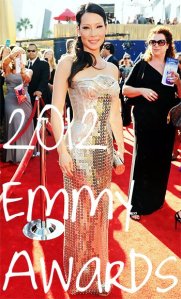 Apparently, Lucy’s stunning metallic Versace gown was quite see-through on camera, so don’t be surprised if you didn’t see much of her on television. But wardrobe malfunctions aside, holy hell, do I love this gown on her. It’s not hard to make Lucy look good – she’s clearly got a secret fountain of youth hiding somewhere, because she’s barely aged a day since Charlie’s Angels. But this is the best thing I’ve ever seen her in, by far. Give me a dress made out of metal any day of the week, dear readers.

The infinitely beautiful Megan Draper hit the red carpet in a refreshingly simple, classic look by Jason Wu, her favorite designer. So many women try minimalism and just look half-dressed; Jessica is giving us head-to-toe, old Hollywood fantasy. The hair, the lips, the jewels – it’s all working, and the gown was clearly made for her.

Rounding out the Mad Men fabness was January Jones, in an apparently controversial gown that I immediately loved. The makeup looked better on television than it did on cameras, but I’m so busy taking in the beauty that is her Zac Posen dress that I couldn’t possibly care. It’s dramatic and daring and a complete middle finger to Matthew Weiner (Mad Men‘s creator/showrunner) for putting her in that fat suit all season long.

A career high for Tina Fey, at least as far as her fashion is concerned. Liz Lemon has never, ever looked better, y’all. The embellished, curved neckline is fantastic, and the cut and fit of the dress are crazy flattering. I’ve never seen her look taller, slimmer, or more confident than this. And it’s been forever since I’ve seen her in anything but black or navy, which is crazy, because this plum color is heavenly on her.

This was my Resort 2013 red carpet prediction for Reese Witherspoon, but I’m in love with it on Padma. Sometimes, a perfect color and a perfect fit are all you need.

Subtly beautiful, and subtlety is something we don’t find on the Emmys red carpet too often. Case in point:

That is a color and a half, dear readers. I love it, but this was a lot of gown on Julie. And although the Los Angeles heat didn’t spare anyone’s hair, Julie Bowen’s hair was one of the worst. Kentucky-fried terror.

Jane basically looks the same at every awards show, but this is probably my favorite dress she’s worn. I’m not a fan of the length, but the ombre, glittering gray color is beautiful.

Gorgeous gown, but it would’ve had a thousand times the impact if it were in a color. Also, the hair and makeup are infuriatingly pedestrian. You can’t pair everyday hair and makeup with a ball gown, ladies – certainly not at the Emmys.

In case you’ve spent the last twenty years weeping over My Girl, like I have, I’d like to present the grown-up version of Anna Chlumsky, looking freakin’ awesome in Christian Siriano. The train is silly and the shoes are worse, but the gown itself is lovely and flatters her figure beautifully. Love the earrings, darling!

The skirt could use a good steaming, but I would really love this look if it weren’t for the gigantic, obtrusive turquoise jewelry. Seriously, Leslie? This was almost phenomenal. Now you look like a soap opera star.

I think this gown is a work of art, but it also requires a perfect fit and expert styling, none of which is on display here. This gown desperately called out for a necklace and no tan lines, and I find the seam down the center very distracting.

I liked this dress until I realized that the negative space creates a penis pointing right up to the waistline. I can’t un-see that, and the dress is ruined for me as a result. I also think the shoes are kind of old-ladyish and the hair is all wrong.

Gorgeous hair and makeup, and this is a great neckline on her. But she needed a slightly shorter dress, and certainly no mullet skirt. And those shoes are just too clunky for this look.

In case you haven’t seen Saved! (which you obviously should because where else can you find evil, Catholic Mandy Moore and badass, handicapable Macaulay Culkin in addition to Susan Sarandon’s daughter as a Jewish slut?), you might not know Jena Malone. But get on board, because she’s been cast as Johanna in the next Hunger Games film (squeeeeefangirlmoment!). Love the Angelina leg, and I’m fully obsessed with her shoes, but the gown is clearly meant for a much taller woman. The wine color is lovely, though.

Dear Hollywood: GET YOUR GOWNS TAILORED! It’s only the biggest night of the fucking year. There is no excuse for this. But Cat, that’s a great color on you, and while I respect the fun, kicky clutch, I think it’s a little casual for the event.

Thank you, Mermaid Barbie. Anyone else?

See: every other comment about fit. Her tits were never actually in the bustline of this gown, and let’s face it, this looks much more like a child’s Halloween costume than an Emmys gown. And I bet you ten bucks she’s got tights on underneath it.

Ashley Judd, WHAT IS GOING ON WITH YOUR HAIR?!?!?! I am willing to table the discussion of your bridesmaid’s dress in order to address the atrocity that is happening above your forehead!

I don’t really know why I hate this as much as I do. But as soon as I saw it, I sighed and rolled my eyes. Is she too young for it? Is the dress too dated? Is it too cliched? Do I just hate it whenever a star looks like she got caught in a shower curtain on the way to the red carpet? I don’t know, dear readers. But I don’t like it.

Ellen is forever fabulous, but PORTIA. Get your shit together, honey! I don’t know why you thought a sheer lace striped peplum jumpsuit was a good idea, but you were very much mistaken.

Zosia, sweetheart, it takes a very unique kind of woman to wear this dress. And you are so very much not that woman.